The irrational, media-driven measles fear has been cranked up to eleven. Threats to jail, sue, publicly shame and even KILL parents and wish death on the children of those who choose not to vaccinate — and wishes that their children die for not vaccinating (which makes no sense if you think about it, hey let’s save kids with vaccines but kill the unvaccinated) — are spewing out of sheep everywhere across the country at an alarming rate.

I say sheep because I can’t think of a better term for people who have completely handed over their ability to think critically to a scientific dictatorship with a television.

Now on top of all that, someone thought it would be a great idea to start a petition on White House.gov asking that insurance rates be raised for families who choose not to vaccinate. 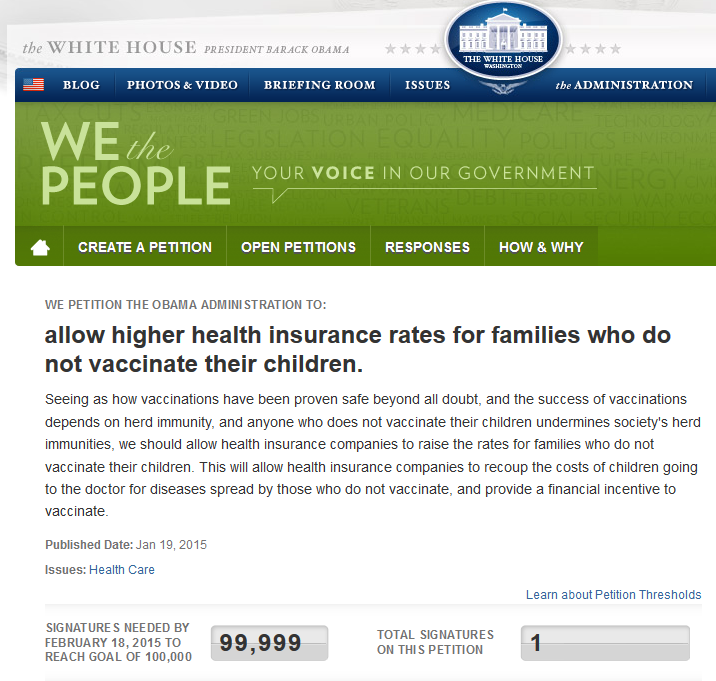 Seeing as how vaccinations have been proven safe beyond all doubt, and the success of vaccinations depends on herd immunity, and anyone who does not vaccinate their children undermines society’s herd immunities, we should allow health insurance companies to raise the rates for families who do not vaccinate their children. This will allow health insurance companies to recoup the costs of children going to the doctor for diseases spread by those who do not vaccinate, and provide a financial incentive to vaccinate.

The death cultists that wrote Obamacare are probably rubbing their grimy little hooves together with glee at this moment.

I wonder if the very first clause of the very first sentence being entirely untrue has anything to do with the fact that, even though the petition has been up for two weeks, only one person (the one who started it, D.G. of Pasadena, California) has signed it at the time of writing this.

By the way, health insurance companies recouping what costs? Hospitals are already charging $20 for a freaking Tylenol in this country. It’s insane.

As if all these vaccinations have made our children in this country so healthy to begin with. If all it took were vaccines, considering America has the most aggressive vaccination schedule in the world, we should have some of the healthiest children, right?

Guess that explains why the CIA’s world factbook has us listed as 55th out of 224 countries for infant mortality rate even though they list the United States as third in the world for health expenditures — America spends a whopping 17.9% of our GDP on healthcare.

Besides, if vaccines are really so effective, then why are parents who vaccinate their children so scared of parents who don’t? 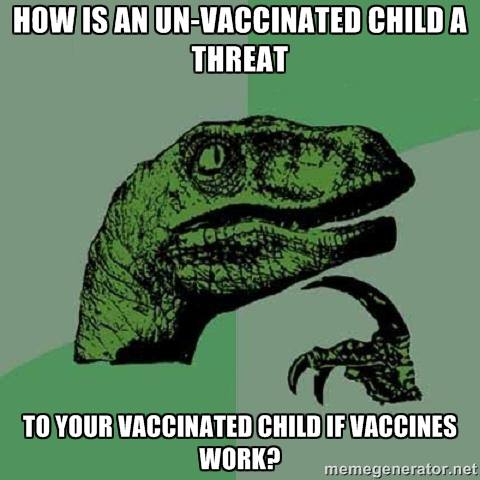 Oh, wait, this is about “herd immunity” through vaccination — the holy grail of pro-vaxxer arguments.

Ugh. How many times does this have to be debunked?

Take it away Dr. Russell Blaylock:

That vaccine-induced herd immunity is mostly myth can be proven quite simply. When I was in medical school, we were taught that all of the childhood vaccines lasted a lifetime. This thinking existed for over 70 years. It was not until relatively recently that it was discovered that most of these vaccines lost their effectiveness 2 to 10 years after being given. What this means is that at least half the population, that is the baby boomers, have had no vaccine-induced immunity against any of these diseases for which they had been vaccinated very early in life. In essence, at least 50% or more of the population was unprotected for decades.

If we listen to present-day wisdom, we are all at risk of resurgent massive epidemics should the vaccination rate fall below 95%. Yet, we have all lived for at least 30 to 40 years with 50% or less of the population having vaccine protection. That is, herd immunity has not existed in this country for many decades and no resurgent epidemics have occurred. Vaccine-induced herd immunity is a lie used to frighten doctors, public-health officials, other medical personnel, and the public into accepting vaccinations.

I almost wish the media would focus on something else for sheep to be afraid of at this point. Besides being utterly ridiculous, this one is getting really, really old.

UPDATE: In response to this article, a Daily Sheeple commenter started his OWN petition opposing the one in this story entitled, “Allow higher health insurance rates for families who vaccinate their children.” You can sign it here.