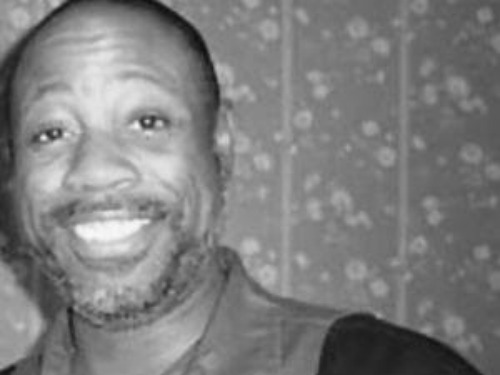 On the night of December 29, 2014, Kevin Davis’ girlfriend was stabbed during a dispute with a roommate.

Davis did what most people would do – he called the police for help.

It would be the last call he ever made.

Davis and his girlfriend, April Edwards, lived in an apartment in DeKalb County, GA. Davis let Terrance Hilyard, a co-worker going through a rough spell, stay with him and Edwards in their one-bedroom apartment.

But as it is often said, no good deed goes unpunished.

Hilyard, while in the midst of a dispute with Edwards, stabbed the woman with a kitchen knife and fled the apartment.

DeKalb County Police Officer Joseph Pitts arrived, but according to several witnesses, he did not make his presence or identity known.

Pitts entered the apartment and shot and killed Tooter, the couple’s three-legged dog.

Davis heard the shots and thought Hilyard might have returned with a gun. He grabbed his own gun and walked out to the front of his home…where he was immediately shot in the abdomen by Pitts.

Did the officer give Davis a chance to drop his gun?

It depends on who you ask.

DeKalb police have claimed that Pitts repeatedly told Davis to drop his weapon before shooting him, reports Atlanta Progressive News.

But Edwards and several neighbors who witnessed the incident say they did NOT hear Officer Pitts order Davis to put down his weapon.

The police also claim that Tooter lunged at Pitts and he had no choice but to shoot the dog. (Haven’t we heard that one before? But wait – remember – this particular dog only had THREE LEGS!)

After the shooting, Edwards came out of the bedroom and asked, “What have you done? Why did you shoot him?”

It gets even worse, as Jim Chambers reported for AlterNet:

A second officer arrived on the scene. Davis, prone, said he was unable to feel his legs. He was arrested, charged with aggravated assault of a police officer, and transferred to Grady Hospital in downtown Atlanta in police custody.

Over the next two days, during his stay at the hospital, Davis’s family made numerous attempts to speak with him, both in person and over the phone, but they were denied by police, who said he was “in police custody.” Davis was not allowed to have outside contact, which reportedly evoked frustration on behalf of attending doctors.

On December 31, Davis died from his injuries sustained at the hands of Officer Pitts.

“It’s heartbreaking to us,” said his sister, Delisa Davis, “that he had to die alone, that he died with the identity of a criminal. He was 44, and had never been convicted of any crime.”

Kevin Davis’s family members “…called, went to the the hospital, they tried everything in their power to see him so he wouldn’t die alone. So they could whisper something in his ear that would give him strength to keep fighting,” Mawuli Mel Davis, the family’s attorney, said.

And if it wasn’t cruel enough to deny the family the opportunity to see their loved one as he was dying, the manner in which they were told of his passing was beyond inhumane:

…they were notified, without condolences, that he had “expired.” A representative of DeKalb County Police allegedly said to them, “You can go see him now.”

Why wouldn’t police allow family members to visit Davis as he lay dying? Could it be because he and Pitts were the only two people who knew the complete story about what happened that terrible night and they didn’t want Davis talking?

Davis’ official cause of death has not been made public.

Delisa Davis spoke with the WRFG Labor Forum on January 27, and revealed some startling details about her brother’s death:

In case you didn’t catch those details, let’s recap:

1) Police told Davis’ family that he was shot once. The surgeon who tried to save his life said he was shot three times.

2) Davis was handcuffed AFTER being shot – as he was lying on the floor bleeding – and was arrested for aggravated assault.

3) Davis was handcuffed to his hospital bed…as he was dying. Alone.

This is a man who had never been convicted of a crime, was by all accounts a good person, and was the person who called police for help to begin with.

Oh, and about the “investigation” into Davis’ death:

DeKalb Police say their investigation into the shooting incident continues – and when it is done, they said they will turn it over to the district attorney.

The district attorney’s office on Thursday said they will conduct a separate investigation when police finish theirs. Typically, any time there is a police-involved shooting in DeKalb County, their investigators go to the scene as well, to take notes first hand. (source)

But, to date, the DeKalb County Police Department has not asked the Georgia Bureau of Investigations to get involved in the case, something Mawuli Mel Davis says is common protocol for an officer-involved shooting.

The family is trying desperately to get that investigation:

On Friday, January 23, members of the Davis-Bozeman Law Firm, along with the Davis family, held a press conference at the Decatur headquarters of the Georgia Bureau of Investigations to deliver a letter from Georgia State Senator Vincent Fort (D), requesting that the bureau launch an independent investigation of the shooting, death and arrest of Kevin Davis. “When you call for help, that is what you should get. An independent investigation needs to be launched immediately so this family can understand what has happened to their loved one,” said Mawuli Davis, a partner in the Davis-Bozeman firm. (source)

The GBI has yet to respond to the request.

By the way, Hilyard DID return to the apartment and was arrested and charged with one count of aggravated assault for stabbing Edwards, who suffered a punctured artery in her right arm and has recovered.

If you would like to show your support for the Davis family, you can sign this petition: #Justice4KevinDavis: Petition for DeKalb P.D. to ask for GBI Investigation of Kevin Davis Shooting