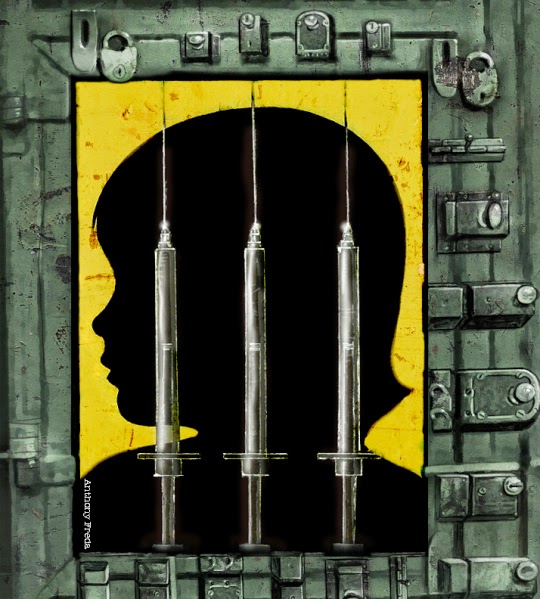 The recent outbreak of measles in California has gotten a lot of uninformed people’s britches twisted very badly, it seems. They are reacting more like some wild animals that apparently have gotten into locoweed.

According to the article “Blaming Anti-vax Parents for Mickey Mouse Measles” written by Rebecca Terrell,

California’s measles outbreak has climbed to 91 confirmed cases, prompting a vicious attack from USA Today contributor Alex Berezow against “anti-vaxxers.” He blames them for the epidemic that CDC officials say was introduced at the Disneyland theme park by a person infected with measles overseas. Berezow’s knee-jerk reaction is to declare, “Parents who do not vaccinate their children should go to jail.” [Emphasis added]

What would “the sky is falling chicken little” Alex Berezow have done in the 1940s when millions of children—and I was one of them—got measles as a “rite of passage” disease? It was a known and expected given: every year, a new crop of kids, not previously infected, would get measles, chicken pox, German measles, and other childhood communicable infectious diseases that, once contracted, gave them lifelong immunity! We ALL lived too! I never heard of any child dying from them. That was before antibiotics were available. Furthermore, Moms knew how to treat measles with home-grown, handed-down protocols and remedies.

Now, compare that with what’s happening today, especially in this story coming out of California and the Disneyland measles.

What happened between the 1940s and now? Apparent corporate medicine and control, plus bureaucratic overtake by lobbyists who, with monetary influence, prowl and lobby Congress, state legislators, the media, and write laws to promote pharmaceutical interests and products.

Do you know that 94% of the U.S. FDA’s budget increase probably is funded by drug companies? Well, read what Dr. Mercola says about that here.

Forbes asked, “Is The FDA Being Compromised By Pharma Payments?” What do you think? And why should pharma’s “tobacco science” about vaccines, in particular, mandate that parents allow MDs to put verifiable poisons into infants as young as 24 hours old?

Okay, so now let’s get down to brass tacks!

Currently, most of the younger population according to U.S. CDC stats are vaccinated. Here’s what the CDC says in its Morbidity and Mortality Weekly Report (MMWR), Aug. 29, 2014

According to the online magazine Mother Jones, during 2009 to 2012 some states were re-evaluating their vaccination exemptions per bills introduced into state legislative bodies.

In the map below, only 7 states’ bills went for harder exemptions, whereas 12 states went for easier exemptions. Why is that? Probably because children are being harmed more by vaccines than ever before and the autism rate has skyrocketed to one in 68 children in the USA per the CDC.  In the 1970s that rate was one in 10,000! Vaccine mandates came in during the 1980s.

If during 2013 the vaccination rate for children 19 to 35 months old was 91.9% for ≥1 MMR dose, that’s almost the ideal vaccination rate of 95% to attain what is called “herd immunity” for those disease classifications in that vaccine: Measles, Mumps, Rubella. And, vaccinated kids should not contract those diseases nor be afraid to come in contact with infectious disease carriers since they are supposed to be immunized against them.

However, vaccinated kids’ parents become paranoid since they think non-vaccinated kids can give their kids disease. So, what’s the use of getting vaccinations for your kids, if you still have to be worried about others? Something doesn’t make sense. What doesn’t make sense is that vaccines apparently compromise kids’ immune systems, or overload them with too many vaccines, and their immune systems can’t function as nature intends. Kids can become toxic from neurotoxins and other toxic chemicals in vaccines, which then cause other complications.

My 2013 book, Vaccination Voodoo, What YOU Don’t Know About Vaccines, discusses many of the vaccines serious chemicals, toxins, heavy metals, etc. and the harm they can do.

However, here’s a fly-in-the-ointment MMR issue: The MMR vaccine that had been sold in the USA was manufactured by Merck and Company. Two Merck employees blew the whistle on the efficacy rate/rating for the mumps active in the MMR.

Back on July 12, 2012, I published the article “U.S. Government and Whistleblowers Sue Merck About Falsely Certified Mumps Vaccine.” At one time, a ‘faulty’ Merck MMR vaccine apparently was administered to approximately 5,000 children who contracted mumps during the 2009 outbreak. Those children were vaccinated against mumps with the MMR vaccine, but still contracted mumps because, as I said in that 2012 article,

In essence what transpired is the vaccine virus was “passaged” over the years through various growth medium or animal cells that caused the vaccine to lose its potency—let’s say ‘watered down’—and it became non-effective against the “wild” mumps virus. However, Merck had contended its MMRII vaccine was 95 percent effective (efficiency or efficacy rate) since at least the year 2000. The complaint charges Merck listed that false information on the vaccine package inserts which the U.S. CDC, FDA, and the National Vaccine Program relied upon as accurate information to promote to health agencies. That was not scientifically accurate nor was Merck able to produce that 95 percent effectiveness rate according to the accepted practices the CDC and FDA relied upon for vaccines to be certified. However, Merck never ‘fessed up that it was selling bum dope information and defective MMRII vaccines.

In view of the above facts as presented in that lawsuit by whistleblowers, one has to wonder if any type of ‘foul play’ goes on with efficacy rates in other vaccines in order to have their efficacy rating accepted and approved by the CDC/FDA. Quite frankly, we will never know unless whistleblowers come forth.

Last year, “CDC Whistleblower Dr. Thompson: ‘I’ve Stopped Lying’ – Willing to Testify on Vaccine Fraud” [Health Impact News] came forward to blow the whistle on how vaccines were discounted by the CDC as a cause in autism.

In the video, Thompson states that the CDC has “become paralyzed” over the vaccine- autism issue. He states that the whole branch (in charge of vaccine safety) is “becoming more paralyzed, with less and less being done.

This video is posted on Health Impact News.

What do the statistics say?

What’s going on? What kind of cock ‘n bull story is being given about all the deaths from measles, whooping cough, and other infectious diseases when the CDC reports hardly any deaths! Is it any wonder that parents are becoming alarmed that infectious diseases won’t get their kids, but vaccines will? One only has to read the CDC’s VAERS reports where hundreds of thousands of adverse reactions from vaccines are reported. The National Vaccine Information Center has a helpful online site for navigating the CDC’s VAERS reporting system – see here.

Let’s take a read on what vaccine apologists won’t tell you or would rather that you not know. Isn’t there such a thing as “informed consent” for any medical procedure?

Mother Who Questions Vax at Hospital Has Newborn Taken Away
http://www.thehealthyhomeeconomist.com/mother-who-questions-vax-at-hospital-has-newborn-taken-away/

Effectiveness of the Flu Vaccine against Influenza
http://www.globalresearch.ca/effectiveness-of-the-flu-vaccine-against-influenza/5376190

Warn Your Friends and Family: The Fluzone High-Dose Vaccine Is Dangerous
http://articles.mercola.com/sites/articles/archive/2011/10/17/dangerous-new-ineffective-flu-vaccine-released-for-seniors.aspx

And, the most problematic concern about vaccines is what Bill Gates says in this TED lecture.

Listen carefully for what he says vaccines will be used for at 2.15 on the timeline. Shocking? I don’t think so because Gates and his foundation are spending oodles of money to vaccinate developing countries’ children. What those countries need is proper sanitation, clean water supplies, and healthful nutrition—not vaccines!

Those three necessities of life were responsible for the automatic decline for infectious diseases even before any vaccines were invented for childhood infectious diseases. For an accurate history of vaccines, the book Dissolving Illusions: Disease, Vaccines, and The Forgotten History is a must read.

Realistically, the media’s and vaccine acolytes really need to get their shtick together about the facts regarding vaccines and vaccinations. Ad hominem remarks, fanaticism, and junk “tobacco science” just don’t work anymore. Fear tactics by health agencies need to be modified to reflect reality, as CDC’s statistics above prove, and not the apparent Big Pharma monopolistic push to sell more vaccines.

All the bull crap about vaccines has to be seen for what is—another control on herd mentality in order to comply with directives to fall in line with the New World Order that’s being pushed upon everyone at every level, and ratcheted up whichever way they can, especially using fear tactics with fudged science and statistics, in my opinion.