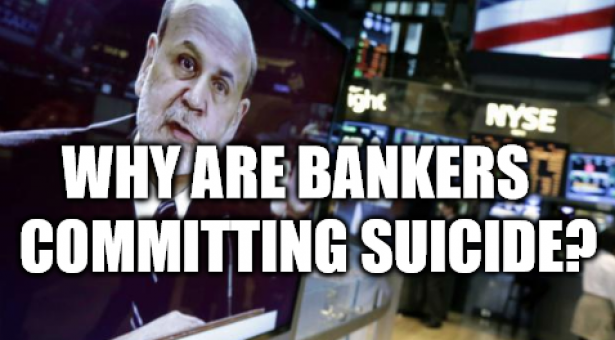 Last year, 48 prominent bankers died in the most interesting case of coincidental deaths or one of the most daring plots against the elite in modern history. In THE most amazing of these assassinations, 57-year-old Richard Talley was found “with eight nail gun wounds to his torso and head” in his own garage. How could any human being accomplish doing this to themselves? This scenario has repeated itself 48 times in the past year.

This article explores the various theories on who is to blame for dead bankers.

Wall Street has been transformed into history’s biggest Mafia-type casino in the history of the world. The megabanks have become more reckless than ever, and trillions of dollars are at stake and corners have been cut and laws have been broken in order to maximize profits. One prominent theory on who is killing the bankers, centers on the elite level bankers, who are killing their underlings. Why? Because these banker minions could turn state’s evidence in exchange for immunity from prosecution at some future date. According to some, in the final analysis, there is really not that much difference between how organized crime operates and how Wall Street carries out its business.

Those that believe that the bankers are killing their own to prevent future prosecutions, make a great deal of sense. However, they would be wrong! The bankers, who have effectively hijacked our government do not need protection from the very government in which they control virtually every aspect of power.

The bankers have, time and time again, committed egregious offenses against the American people and nobody goes to jail. Dyncorps and Wells Fargo Wachovia have been busted for child sex trafficking, paid a $400 million dollar fine, but nobody went to jail. MF Global stole over a billion dollars in secured investor accounts and nobody went to jail. The bail-outs were necessitated because Wall Street participated in the illegal ponzi scheme called “credit-swap derivatives”, and nobody went to jail. The MERS mortgage fraud has cheated millions out of maintaining ownership of their homes, hundreds of district attorneys are aware of this fact, and nobody has gone to jail. Goldman Sachs shorted stocks related to the airlines just prior to 9/11. They did the same with the Gulf Oil Explosion. And most recently, the thieves from Goldman Sachs shorted the price of gold and caused a massive dump of gold in April of 2013, just prior to the elite grabbing as much gold as they could as a hedge against the coming economic collapse. Also, don’t forget that for over a 100 years, the Federal Reserve has created counterfeit money out of thin air through fractional reserve banking and nobody has even been charged for an offense that would send the average American to prison for 20 years. The bankers are not killing each other to prevent prosecution from a system that they already control.

Is Putin Killing the Bankers?

One theory that is floating out there with regard to the assassinations of these bankers has to do with Putin masterminding a giant plot to kill Western bankers in retaliation for their influence in inhibiting the Russian flow of gas through Ukraine to Europe. Further, this same line of thinking postulates that Putin is also killing the bankers because of plunging oil prices, which is devastating the Russian economy as well as S&P lowering the credit rating of the Russian government.

This theory fails on its face because if Putin was carrying OUT these murders, he knows he is inviting World War III. And if he was going to invite World War III, why not just start World III on his terms at a time of his choosing in order to maximize his chances of winning. Clearly, Putin is not killing the bankers.

Another Disgruntled Set of Groups Who Have Motive to Kill Bankers

There is a common thread which runs through the Obama purge of 260+ senior military officers. The way that a senior command officer gets fired from the Obama controlled American military is to question leadership decisions. According to my sources, the most common leadership decisions that are questioned by members of the military have to do with worthless and expensive weapons systems which are serving to weaken the military in comparison to its potential foes, namely, China and Russia. These weapons systems are of course funded by the banking elite along with the loans underwritten by the megabanks.

Operating on the notion that the elite bankers want to destroy America in order to usher in world government, it becomes easy to see why the American military, military contractors, private armies and blackops are under attack. All aware people realize that Obama is the pawn of the bankers.

At the heart of Obama’s treasonous strategy to incrementally weaken the American military, the F-35 is at the heart of this dismantling of the American military as well as the destruction of the American military budget. The plane cannot climb and turn efficiently. It is a death trap for pilots who will be outmaneuvered by the faster and more efficient Russian and Chinese planes. The only winners in the F-35 controversy are Lockheed-Martin (the manufacturer of the F-35), the financial institutions underwriting the loans such as JP Morgan and the Chinese and Russian pilots that will shoot down these planes in the coming World War III. The military brass that dare to challenge one boondoggle after another (i.e. the expensive and inefficient F-22 which is now out of production), are shown the door. This systematic destruction of the American military extends to our nuclear weapons in which our launch policies have been compromised and a lack of budgeted maintenance money has been woefully decimated by Obama. Additionally, our suicidal rules of engagement in combat zones have also been a point of consternation among the military. The latter ultimately led to the sacking of three Afghanistan theater commanders.

Before we lay all of this at the feet of Obama, who does Obama work for? He works for the bankers who have hijacked our government.

Under Obama, our traditional covert and elite military forces have been assassinated (i.e. Seal Team Six) and much of the effectiveness of these units has been compromised.

Many in the military contracting business have experienced betrayals as well. Contracts have been shifted and work has been reallocated. Many of the military contractors now have chip on their shoulder. These groups have coalesced to form a type of Viet Cong resistance force.

Two months ago, I began to receive intelligence information from my best sources which stated that the disaffected three groups mentioned in this article (i.e. blackops, some military contractors and much of the former military leadership) are conspiring to exact vengeance against a banking system viewed as an extreme threat to not only personal military careers but to the country as a whole.

I have sat on this story because there are not the traditional hypertext links which serve to prove a point beyond a reasonable doubt. However, I should mention that my best source was the same source that provided me with the “military coup angle” with regard to Benghazi. Although I was heavily criticized when I brought out the military’s intention to save Ambassador Stevens and use him as a pawn to expose the criminal actions of this administration and the bankers behind this Presidency, the story was proven to be true in a variety of ways.

I have had dozens of discussions with colleagues and associates on the fact that these three groups are behind the assassinations of the bankers. I have found a core of people, with affiliations to the media, whose confidential sources are all providing consistent data which validates what is being written here. In all, I have spoken to four media people who have very similar information to mine. Two of the sources are willing to go on the record with what they have been told and two sources asked that I not reveal their names.

The sources, willing to go on the record, which serve to validate these claims are talk show host Joshua Coy and Paul Martin, and of course, myself. The three of us are willing to stake our reputation on what is written here and are confident, as was the case with Benghazi, that more of these truths will surface. Besides printing the truth as we see it, this is also an attempt to shake the bushes.

If one is wondering what prompted me to lead the charge and shine the light of day upon this, it is tied to recent events. I have been experiencing several recent communications anomalies which tells me that scrutiny has increased. Within the last week, I was speaking to my wife while driving and placed my phone on the passenger seat. After two minutes, the phone redialed my wife but displayed my number as “Unavailable”.  Emails between myself and my colleagues are being delayed by several hours, and there are a whole host of other anomalies which tells me that the surveillance is increasing. I believe, as do Paul and Joshua, that if one is going to be on the list, it is better to be on top of the list.  Breitbart, Hastings and Clancy all died with a major undisclosed  story inside of them. We have no such wish. Self-preservation is a powerful motivator.

One revelation that we have discovered is in regard to what is behind the recent Connecticut earthquakes. The “earthquakes” on their face are highly suspicious because they are thought by some to be to deep underground explosions which have been described as large booms. These facts are inconsistent with an earthquake in which the seismic activity would occur much farther underground. All three of us have been told that the earthquakes are actually deep underground explosions designed to take out some of the Continuity of Government bunkers that the elite will run to as circumstances dictate. If these attacks continue in other locations, the ability to cover this up will become increasingly difficult. The USGS is firing any scientist who calls the Connecticut anomalies anything but an earthquake. Many readers, in the aftermath of Benghazi, have believed that the military would strike back at the bankers who are hijacking our government. Terrorist groups like to claim responsibility for the actions because they justify their existence as well as to attract more converts and potential funding. In the same vein, the people involved in this counter-insurgency want the American people to know that there is resistance to the takeover. This is the first step in gathering a popular resistance force.

My confidence call on this report being accurate is high because of the quality of sources from which the information comes from. I recently interviewed Josh Coy and compared notes with regard to what we know to be true. If you have not heard the interview with Josh Coy on this topic, you will want to listen to the following:

Clearly, the sides for civil war have been drawn and the killing of the bankers is at the heart of what is coming. My advice to all interested parties is to do your own research and satisfy yourself as to the threat level and then take appropriate defensive action. 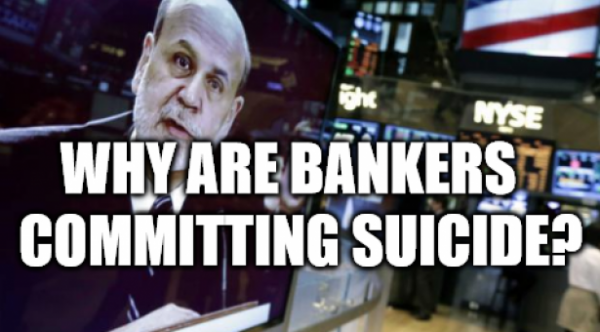