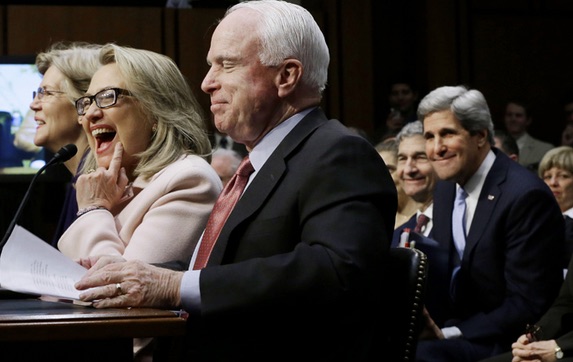 Recently revealed conversations between the Pentagon and the Gadhafi regime in 2011 show that then Secretary of State Hillary Clinton was serving the Muslim Brotherhood by pushing a false narrative to justify the removal of Muammar Gadhafi, as Shoebat.com has reported. With the help of corroborating evidence, we’re closer to proving that Republican Senator John McCain was likely just as invested in facilitating the rise of the Muslim Brotherhood in Libya as Hillary was. Before getting to the evidence that implicates McCain, let’s work backward from the Benghazi attacks.

Any discussion about what happened in Benghazi on the 11th anniversary of the 9/11 attacks usually includes the topic of weapons shipments to Syrian rebels via Turkey. According to a book written by a former Navy SEAL and Green Beret, the man who would eventually become CIA Director oversaw that operation from the White House:

(Deputy National Security Advisor) John Brennan also ran a highly compartmentalized program out of the White House in regard to weapons transfers, and Stevens would not have been trusted with that type of information. Stevens likely helped consolidate as many weapons as possible after the war to safeguard them, at which point Brennan exported them overseas to start another conflict.

According to the House Permanent Select Committee on Intelligence (HPSCI) report completed last August and then released the Friday before Thanksgiving, the mission in Benghazi didn’t involve physically collecting and shipping weapons to Syria but the CIA clearly knew who was. As Shoebat.com reported, this amounted to a distinction without a difference:

One thing that can be certain is that after the removal of Muammar Gadhafi in 2011, weapons in Libya were being rounded up and shipped to Syria’s rebels. These logistics constitute transitioning from the end of one operation – regime change in Libya – and the beginning of another – regime change in Syria.

Thanks to an explosive three-part series published by the Washington Times, replete with substantiated audio recordings, readers get to see how the weapons got into Libya in the first place and who supported it.

The third installment serves as a stand-alone piece in this regard and even references a lengthy document / manifest of weapons being shipped into Libya:

Libyan officials were deeply concerned in 2011, as Secretary of State Hillary Rodham Clinton was trying to remove Moammar Gadhafi from power, that weapons were being funneled to NATO-backed rebels with ties to al Qaeda, fearing that well-armed insurgents could create a safe haven for terrorists, according to secret intelligence reports obtained by The Washington Times.

The reports included a 16-page list of weapons that Libyans supposedly tracked to the rebels from Western sources or their allies in the region. The memos were corroborated by a U.S. intelligence asset familiar with the documents as well as former top Gadhafi regime official Mohammed Ismael.

“NATO has given permission to a number of weapons-loaded aircraft to land at Benghazi airport and some Tunisian airports,” the intelligence report said, identifying masses of weapons including tanks and surface-to-air missiles.

In a separate conversation with Dennis J. Kucinich, an Ohio Democrat serving in the House, Gadhafi’s eldest son, Seif, told the congressman that Libyan intelligence had observed Qatar, a major U.S. ally in the region, facilitating weapons shipments. Qatar has steadfastly and repeatedly denied arming the rebels.

“The Qataris have spent more than $100 million on this, and they have an agreement with the rebels that the moment you rule Libya you pay us back,” Seif Gadhafi told Mr. Kucinich in a conversation recorded in May 2011.

Here is an excerpt of a phone conversation between Rep. Kucinich and Seif Gadhafi in 2011, via the Washington Times:

Such a stance by Kucinich – who resisted calls for regime change in Libya – was both welcome and rare. In 2003, he rubbed elbows with Bassam Estwani, chairman of the notorious hornets’ nest for Muslim Brotherhood-inspired terrorism, the Dar al-Hijrah mosque, as Shoebat.com reported. Estwani sits on the Board of the Syrian Emergency Task Force (SETF), which seeks the removal of Bashar al-Assad. The Executive Director of SETF is a man named Mouaz Moustafa, who previously served in the same capacity on the Libyan Emergency Task Force (LETF), as Shoebat.com also reported.

Moustafa and McCain are quite familiar with one another, as are Estwani and Moustafa.

Perhaps the most explosive paragraph in the article involves a Libyan intelligence report showing Qatar sending “…tanks, missiles, truck and military advisers to the rebels”. When coupled with where McCain was and what he was promoting at the time, we see a Senator whose behaviors and words reflected almost exactly, an agenda shared by Hillary Clinton (note the dates in bold):

“On 15th of March the ship loaded with arm[s] arrived to the seaport of Tobruk. On 4th April 2011 two Qatari aircraft laden with a number of tanks, [ground-attack] missiles and heavy trucks was arranged. On 11th April 2011 a number of boats departed Benghazi for Misrata, the shipment comprised assistance including SAM-7 [anti-aircraft] missiles. On 22nd April 2011,800 rifles were sent from Benghazi to Misrata,” the report said.

That year, the annual U.S.-Islamic World Forum (US-IWF) – an event co-sponsored by the nation of Qatar and the Brookings Institute – was held in the U.S. for the first time, from April 12-14. Prior to that, it had been held in Doha, Qatar. McCain attended the 2011 edition and was part of a panel. In this bizarre excerpt, McCain referred to the Arab Spring as a “seismic event” he was thrilled to be a part of and said he hoped it would spread to Russia and China:

Keep in mind the aforementioned paragraph from the Times article. Note that on April 22, 2011, hundreds of rifles were “sent from Benghazi to Misrata,” according to the report. Something else happened on that day. McCain was in Benghazi – with U.S. Ambassador to Libya Christopher Stevens and told an Al-Jazeera reporter that the Libyan (Muslim Brotherhood) rebels were his “heroes” on the same day they were receiving weapons:

Little more than one year later and just 90 days before the Benghazi attacks, Rep. Michele Bachmann (R-MN) sent a letter to the Inspector’s General office of the State Department. In that letter, Bachmann raised legitimate concerns about the Muslim Brotherhood connections of very close Hillary Clinton adviser Huma Abedin. It was John McCain who further implicated himself in the rise of the Muslim Brotherhood by defending Abedin and denouncing Bachmann, as Shoebat.com has reported.