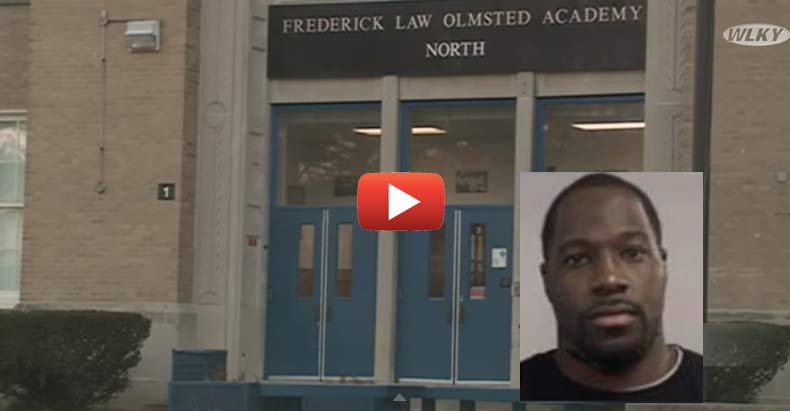 Louisville, Kentucky – A school police officer was recently arrested after he was caught assaulting young children on security camera footage.

Jonathan Hardin was a school resource officer at Olmstead Academy North Middle School and is now facing multiple charges after it was discovered that he had been terrorizing children at the school.

Two separate incidents have been revealed by security camera footage. In one case, Hardin is seen punching a 13-year-old in the face because he had suspected that the child cut in the lunch line. According to court documents, after assaulting the child, Hardin then charged the student with menacing and resisting arrest.

In an even more disturbing incident, that was also caught on video, Hardin suspended another child in the air in a chokehold, allowing the student to drop to the ground where he laid unconscious. Instead of getting medical help, Hardin handcuffed the child and kept the student isolated for the entire day. According to a doctor, the child’s brain was damaged.

According to a school spokesman, Hardin was fired from his post at the school this week, and he has been suspended without pay by the police department.

“Allegations of our officers involved in criminal wrongdoing are very concerning and something we take quite serious,” Chief Steve Conrad said in a statement.

Allowing police officers to patrol school has been shown to be a dangerous idea in many circumstances.

Just last week, we reported on a case in Baltimore where a group of 13-year-old girls were assaulted with a baton and pepper spray for questioning a school officer.

Where exactly does the Louisville Metropolitan Police Department recruit from, the local maximum security prison? Some of the worst cases of police brutality that The Free Thought Project has reported on come from the LMPD.

On Tuesday, we reported on the brutal cop who beat his wife while they were driving, causing an accident. After the couple crashed, he punched her in the face, knocking her down, then began kicking her. He was on top of his wife, strangling her, when a good Samaritan stepped in to save the woman’s life. Officer Jonathan Osborne was with the LMPD.