People are just clamoring to get other people’s rights taken away. What happened, America?

This new petition on White House.gov is even more ridiculous than the last one which asked to raise health insurance rates on families who don’t vaccinate. Now it’s just straight up classifying anyone who refuses to vaccinate their child as having a mental disorder. 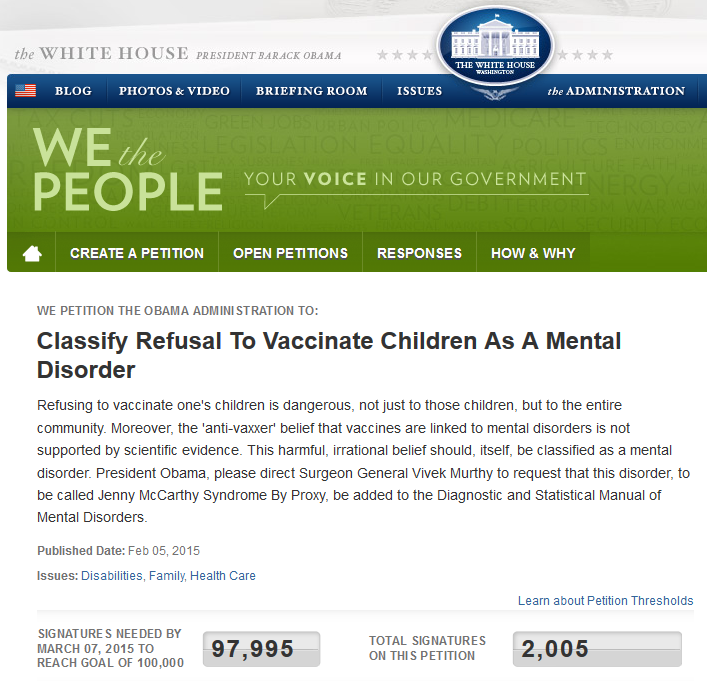 This one, unlike the other, has over 2,000 signatures in just a day.

Refusing to vaccinate one’s children is dangerous, not just to those children, but to the entire community. Moreover, the ‘anti-vaxxer’ belief that vaccines are linked to mental disorders is not supported by scientific evidence. This harmful, irrational belief should, itself, be classified as a mental disorder. President Obama, please direct Surgeon General Vivek Murthy to request that this disorder, to be called Jenny McCarthy Syndrome By Proxy, be added to the Diagnostic and Statistical Manual of Mental Disorders.

Does this petition even deserve to be broken down on its fallacies? No. Not worth the time and effort.

Here’s a petition called, “Require all parents to vaccinate their children, or be charged with child endangerment.” It has 1,365 signatures.

There’s even a petition (only signed by the starter) asking to force vaccines on everyone and if anyone opts out, they are automatically segregated from society.

Funny, for all the clamoring to steal the rights of people who do not want to vaccinate their children, the petition “PROHIBIT ANY LAWS MANDATING THE FORCE AND REQUIREMENT OF VACCINATIONS OF ANY KIND” has the most signatures of all, at 11,956.

Sadly, that’s just what California is about to try to do… attempt to take away parent’s rights to religious or personal belief exemptions. The number of kids who are homeschooled will likely skyrocket, then the state will probably attempt to make that illegal as well.