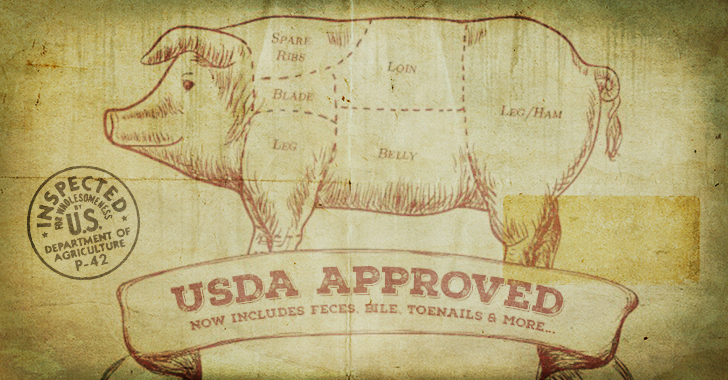 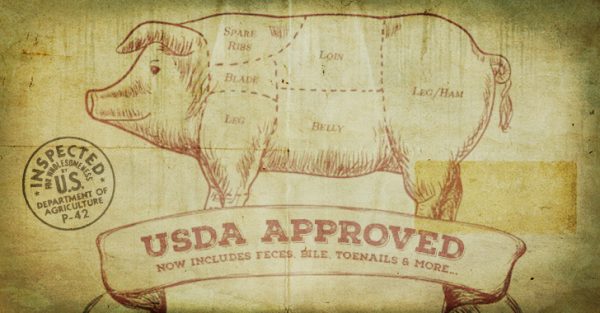 Recent news from the Government Accountability Project has revealed a disturbing portrait of how the USDA clears pork for consumer safety.

Four whistleblowers (three anonymous, one named Joe Ferguson) made statements with signed affidavits disclosing what they have observed working at five pork factories around the country. These plants have implemented a USDA pilot program called the Hazard Analysis and Critical Control Point Inspection Models Project (HIMP). It is intended to speed up production lines and the USDA is looking to expand it to plants nationwide (it was previously implemented with poultry-with unsavory results).

While there are many red flags in the whistleblower’s statements, the most disturbing revelations are the contents of what is allowed in pork at the pilot plants. Because the HIMP program takes USDA inspectors (who at least one whistleblower says were not correctly trained) off the line and puts insufficiently trained plant employees in control, standards have dropped. They have also fallen because the line has sped up from 1100 hogs an hour to 1300. One whistleblower says

“There aren’t enough eyes on the lines to monitor the carcasses coming by at such high speeds. This makes it easy for employees to fail to notice flaws on the animals.”

This results in a sickening variety of content remaining in the meat. According to the same affidavit:

“On multiple occasions, I witnessed them [company inspectors] fail to spot abcesses, lesions, fecal matter, and other defects that would render an animal unsafe or unwholesome.”

With regard to fecal matter, another statement reveals that

“even though fecal contamination has increased under the program (though the company does a good job of hiding it), USDA inspectors are encouraged not to stop the line…”

One whistleblower expressed that his supervisor once told him

“It’s not whether or not people are going to eat shit — they are. It’s just how much.”

“Other contamination such as hair, toenails, cystic kidneys, and bladder stems has increased under HIMP.”

“We used to stop the line for bile contamination, chronic pleuritis, hair/toenails/scurf, and have these defects trimmed/removed, [but] under HIMP, these are considered ‘other consumer protections’ and we are no longer allowed to stop the line so they may be removed.”

Ferguson, who says he watched the number of inspectors at his location fall from 7 to 3 (and that his plant has not been re-examined by the USDA in over 10 years),  is almost certain that there is also tuberculosis present in the meat approved for sale. He says

“Personally, I will not eat any products that bear the name of the company for which this meat is produced. I don’t think that it is wholesome or safe to consume.”

Other concerns raised by whistleblowers were that contamination is allowed in up to 20.5% of the meat. Even when that threshold is passed, reporting it does little good. One complained that because of the amperage of electricity used to stun the animals, bruising and blood clotting appears, which raises the risk of bacteria like salmonella.

The whistleblowers attribute the disgusting conditions to multiple issues. First, they are no longer on the floor inspecting carcasses themselves. Second, plant employees are scared to report the amount of contamination because that requires stoppage of the line. Doing this too much can get them fired.

Most offensively, whistleblowers reported that they had little support from upper-management at the plants or the USDA:

“Our upper-management no longer backs up those inspectors who are trying to do their job.”

Rather, the wrongdoing is the

Further, at least one believes the USDA is dishonest about the efficacy of its program.

“In all of this time since HIMP was implemented the agency has never reevaluated how well the program was working in this plant, despite their promise to monitor the system each time line speeds changed.”

“I do not put a lot of faith or credence in the agency’s word or promises. In fact, at one time an agency official publicly announced that none of the HIMP pilot plants were running over 1,200 carcasses per hour, which was completely false, based on the number my plant was then running.”

The USDA is no stranger to scandal and corruption. There is currently a petition circulation urging the pork factoriesthree of which are owned by Hormelto discontinue participation in the HIMP program.

Nearly a century ago, Upton Sinclair wrote The Jungle, a book about industrial workers that detailed similar conditions in meat factories. His book sparked an outcry amongst Americans and spurred government regulation of food. In 2015, however, it appears that the efforts of well-meaning individuals within agencies like the USDA have succumbed to the lust for power that their higher-ups inflict on the rest of us:

“It seems like the USDA is doing all it can to make sure the HIMP program succeeds in this plant, even if it means betraying consumers by hiding the truth about their food.”