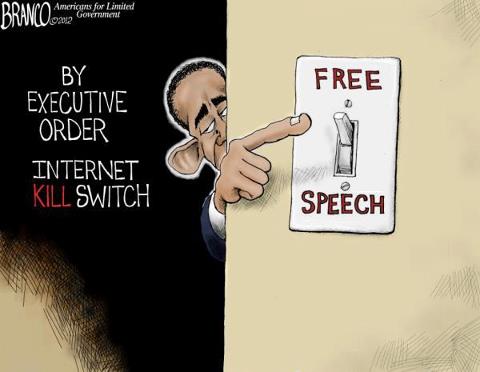 As the old saying goes, “The more things change, the more they stay the same.”  When it comes to our collective Internet freedom as it relates to our First Amendment rights, truer words have never been spoken.

Why We Have “Old Sayings”

A culture develops old sayings about life, because over time, the old sayings are generally true and have withstood the test of time. When it comes to Internet freedom, there are two more old sayings that apply: (1) “If it ain’t broken, don’t fix it; and, (2) “Inch by inch it is a cinch”.

There is no need for the government to change access and content rules on the Internet. Therefore, the government must invent reasons to gain control over our free speech on the Internet, and when they engage in this type of intrusiveness, they usually do this “in the name of protecting the children”. Thus, the Federal government will invent reasons why the Internet is broken and must be fixed. These new arguments to intrude on Internet freedom and free speech, are, and will continue to center on child pornography. The problem with this argument is that all States already have very strict pornography laws. For example, in Arizona, if a person views online child pornography, the criminal penalty is 10 years in prison for each separate image that is viewed by the accused. Arizona residents do not need the intrusiveness of the Federal government to come into play in order to protect its citizens from Internet pornography. In short, the Internet “ain’t broken and it does not need fixin’.”

The Great Firewall of China

In the keynote speech of the conference, Minister Lu made several suggestions, including that China and the U.S. could and should jointly manage the Internet. I will pause for a moment as you rub your eyes in disbelief and reread the previous passage.

Yes, the Chinese and the Americans are actively planning to jointly control the Internet.

President Obama may not be able, or willing, to protect our Southern border from illegal intrusion, but he is certainly on his way to sealing off the borders of Internet freedom.

The two countries vowed to strengthen cooperation (i.e. extreme censorship) on fighting terrorism in cyber space in the latest excuse for Federal government intrusion into our Internet freedoms.

When In Rome, Do As the Romans Do

In classic Orwellian Doublespeak, Under-Secretary Novelli stated that the two countries share a mutual responsibility to build up more broadband access, particularly in the developing world. As the reader will see in later paragraphs, this will be the excuse to tax the Internet. She described this process as being inextricably linked to GDP growth. This twisted logic suggests that economic growth is contingent upon controlling the Internet and its content as well as who has access to the Internet. In China, one increasingly needs an ID to log on to the Internet and the content rules are actually more strictly enforced than Facebook protecting its turf.

Meanwhile at George Washington University (GWU), Minister Lu has been brought to this American university to share stories about the vibrant Chinese Internet industry in Beijing’s Zhongguancun, known as China’s Silicon Valley. While speaking at GWU, Lu invited his American student audience to visit China’s Internet firms there and mingle with the Chinese in order to gain a glimpse of America’s Internet future.

The Secretary General of the Information Research Center of Chinese Academy of Social Sciences, Jiang Qiping, said the U.S. has been insisting the other countries be completely open in cyberspace, but that would bring huge Internet security concerns. Subsequently, the Chinese are telling Americans that we must protect you from yourself. Secretary General, Qiping should rest easy because America is ready to control the Internet in the same manner as happens in China.

The FCC Plans to “Go Chinese” On Internet Freedom

When government is afraid to outright ban something, they are notorious for taxing the activity into oblivion, so as to deny access to a product or service. The Federal Communications Commission (FCC), without any legitimate statutory authority whatsoever, is proposing to expand its taxation and regulation of the Internet. According to the Constitution, all taxes must be passed by Congress. However, nobody ever accused this administration of following the rules of the Constitution (i.e. Benghazi, IRS-Gate, Fast and Furious, intimidation of AP reporters, etc.).

Dictatorial regimes have used the Internet to squash oppositional political thought and to spy on citizens (e.g. NSA). Further, it is well-known that the United Nations views the Internet as an untapped opportunity for tax revenues and an opportunity to regulate popular political ideals (e.g. Agenda 21).

Three Months Ago, the FCC Was Reviewing Archival Documents to Find the Right Mix of Controlling the Internet

Any American who values their present state of Internet Freedom would be wise to review what the FCC was looking at in terms of changing Internet content and access regulations. The following document was leaked to me as to what the FCC was previously looking at when they were meeting outside the purview of public scrutiny. Take the 5-10 minutes necessary to view this 2012 document, under review by the FCC, in order to see just how close we all are to losing our Internet freedom.

I have also received information, from an anonymous whistleblower which stated that the FCC was also reviewing an old Senate bill originally introduced which would have given complete control over the internet to Verizon Wireless, A T & T, Bell South and more. And the FCC was also looking at a former bill introduced by the scourge of Arizona, Senator John McCain, in which he proposed that bloggers be fined up to $300,000 for “offensive statements, photos and videos posted by visitors on comment boards”.

If the FCC had passed any of this legislation, it would have marked the end of previously unrestrained opinions as expressed on the Internet. McCain’s Internet army of censors would then pass the information on to the relevant police authorities and subsequent bloggers could be fined $300,000 or face jail time. Hiding behind the pretense of protecting our children, McCain’s legislation was originally referred to as the “Stop the Online Exploitation of Our Children Act.” The legislation demands that a Stalinist-type army of informants, similar to the abovementioned Chinese Internet police, would patrol the Internet and remove content which it deemed a threat to the established order. The proposed administrative laws, would have had the Internet spies browsing various websites, like a pack of Facebook trolls, looking for inappropriate Internet material which might pose a threat “to the children”.

On the surface, there appears to be good news for Internet freedom advocates. After playing host to protesters in his personal driveway, FCC Director, Tom Wheeler, has backed off consideration for all proposals which in any way, would restrict free access to the Internet and the right to exercise free speech. Before you plan your celebration party, please be aware that the FCC is leaving the door open to imposing an indirect tax upon Internet users. Taxation is a precursor step towards control.

FCC to Use Subterfuge to Control the Internet

On one hand, the FCC seems poised to protect Internet freedom after flirting with rules of extreme censorship only a few months ago. Then, after a few driveway protestors show up, the FCC reverses themselves. However, this is a case of a “wolf in sheep’s clothing”. The FCC is avoiding controversy by changing its tactics.

The FCC has reserved the right to “extract funds from Internet providers to help subsidize services for rural Americans, educators and the poor…” Internet providers won’t be asked to contribute to the subsidy fund, known as Universal Service, right away. The keyword here is “right away“. This will be the first step that the FCC will take to tax the Internet.

Remember,  “Inch by inch, it is a cinch”. If we allow the FCC to unconstitutionally tax the internet, this will be the first step towards exercising unfettered control over the Internet. I also view this as a precursor move to hand over taxation, and ultimately Internet control to the United Nations.

American government and university officials are in bed with the Chinese Internet censors, ostensibly, to learn about how best to limit Internet free speech, Chinese style.

The FCC originally showed its true colors as it strongly considered fining bloggers for free speech on the Internet, according to insider sources. Further, this government is showing its intentions as it is moving toward joint control over the Internet with China. And what will the net effect be? The march towards waking up the country as to the march towards absolute totalitarian control will move forward, unimpeded, as the people eventually lose their right to exercise free speech.

The silver lining in all of this, is that Internet freedom is something that even most of the sheep value. If we in the Independent media play our cards right, we can use this issue to our advantage. Roll up your sleeves awake citizens of America, we have some work to do.