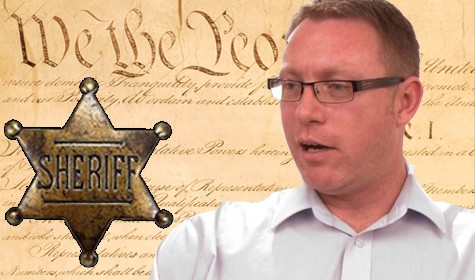 Constitutional Sheriffs are becoming more vocal and demonstrating why they are a valuable asset to freedom and their communities. The latest sheriff to take a constitutional stand is Eddy County, New Mexico’s Scott London, the first sheriff in twenty-five to stand up to the IRS against a tyrannical attempt to sell a citizen in his county’s land without due process.

Priscilla Jones provides the background information for the sheriff’s actions:

Approximately ten days before Christmas, U.S. Marshals broke in the door of Carter’s rental property with their guns drawn. The tenant was a young mother with a new baby—home alone while her husband was at work. Sheriff London was called to the property to intervene. He advised the Marshals that Carter’s case was in appeal and he deserved due process. They threatened to arrest London, but he stood his ground and they backed off.

The Taxation & Revenue Department ordered Carter to cease “engaging in business in New Mexico” until his arbitrary tax debt was paid. Carter appealed this injunction on the grounds that it was both unconstitutional and vague, as it deprived him of his right to make a living and also prohibited him from, “carrying on or causing to be carried on any activity with the purpose of direct or indirect benefit.”

Kent Carter’s property was in the sights of the corrupt Internal Revenue Service and the Department of the Treasury has slated a sale of the properties in question for the 19th of February. When Sheriff London found out about it, he issued the following certified letter on February 4.

Sheriff London cites Section 18 of the New Mexico Constitution and the Fifth Amendment of the US Constitution as the basis for his stand against the federal tyrants.

“Many officers have stood up over the years for the rights of citizens being victimized by the federal government,” Mack said. “But Sheriff London is the first one to stand up to the IRS since the early 1990s.” Mack said, “His actions show courage and humility. London is setting a good example for the rest of our sheriffs.”

KrisAnne Hall documents why sheriffs like London are so important to the people in her excellent article on what is taking place in New Mexico.

“Short of physical resistance, due process and community oversight (a jury of your peers) was intended to be some of the greatest protections against government threat against property,” Hall wrote. “So important was to be the protection of due process, that it is placed multiple times in our Bill of Rights.”

“For example, the 5th Amendment in the Bill of Rights declares that ‘…nor shall be deprived of life, liberty, or property without due process of law;’ The 7th Amendment also declares, ‘In suits at common law, where the value in controversy shall exceed twenty dollars, the right to trial by jury, shall be preserved…'” she adds. “Both of those Amendments express the due process protections guaranteed to the people. Sheriff London accurately states in his letter to the IRS that Mr. Carter has NOT exhausted his right to due process. Yet, the IRS under the auspices of Judge Brack and the US District court, are attempting to deprive Mr. Carter of his property with full knowledge that Mr. Carter’s right to due process is still engaged.”

Carter said the IRS is “worse than the mafia” and called them a “lie.”

“Why should they be able to take anything?” he asked.

One court document, according to Jones indicates that Carter owed $145,000, which Carter maintains has no basis and was “pulled out of thin air” by an assessing agent. However, now the IRS claims that he owes upwards of $890,000! Carter says that number “doubled with the stroke of a pen.”

“The IRS fabricates evidence against citizens by pulling numbers out of a hat and adding fees,” said Sheriff Mack. “They wear people down emotionally and financially until they can’t take it anymore. No citizen should ever have to fight the IRS for decades in order to keep his land.”

I have spoken to Kent Carter. He filed a Motion to Stay the judges decision and was DENIED with NO explanation. If I were to make a professional guess as to why the court denied it, it would be because he filed the Motion outside the “allowed” time frame. That is no excuse for the court to not make that explanation, but there you have it. I also spoke to Sheriff London. He received a call yesterday from the acting Under Secretary of the Department of Treasury, Matthew Rutherford. Mr. Rutherford claims this case has been decided by the appellate court already in favor of the IRS. If he is correct that is a record pace decision. Sheriff London told Mr. Rutherford that he had better present proof of that before he will ever consider allowing the sales to take place. Apparently Mr. Rutherford was not at all happy about that. This could get very interesting!

Perhaps it is not only Sheriff London that needs to take a physical stand at the properties of Mr. Carter, but also the people of New Mexico, just as Americans did for Cliven Bundy and his ranch.

As our forefather Benjamin Franklin once wisely said, “We must all hang together, or assuredly we shall all hang separately.”

If you wish your voice to be heard, you can contact the following: