The following article by Tess Pennington was originally published at Ready Nutrition. After joining the Dallas chapter of the American Red Cross in 1999 Tess worked as an  Armed Forces Emergency Services Center  specialist and is well versed in emergency and disaster management & response. You can follow her regular updates on Preparedness, Self Reliance, and a host of other topics at www.readynutrition.com. End of an Era: Prospects Look Bleak For Slowing the Coming Food Crisis
By Tess Pennington

By and large, the majority of the population has deluded themselves into believing a bright future is upon the horizon. For years, economic forecasters and preppers alike have warned of the bottom dropping out of the economy. The proverbial doom prediction of “it’s not if, but when” is not just a phrase to add dramatic effect, it is a call to action. It’s a warning that the American dream is about to drastically change and that it is time to prepare accordingly.

The End of an Era

We have all seen the anomalous increase in food prices. We can blame it on the massive droughts, extreme weather patterns, and increased cost-of-living that has occurred over several years. While these factors certainly play into the equation, experts believe the root cause is that the world has entered into an era of “peak food” production. Peak production refers to a point at which the growth in production of a crop, animal or other foodstuff begins to slow down. Nine or ten food staples feed the world and they are slowing in their production.

New research finds that the supply of 21 staples, such as eggs, meat, vegetables and soybeans is already growing scarce, while the global population continues to soar.

Peak chicken production was in 2006, while milk and wheat both peaked in 2004 and rice peaked way back in 1988, according to new research from Yale University, Michigan State University and the Helmholtz Centre for Environmental Research in Germany.

What makes the report particularly alarming is that so many crucial sources of food have peaked in a relatively short period of history, the researchers said.

“People often talk of substitution. If we run out of one substance we just substitute another. But if multiple resources are running out, we’ve got a problem. Mankind needs to accept that renewable raw materials are reaching their yield limits worldwide,” said Jianguo “Jack” Liu, of Michigan State University.

This synchronization of peak years is all the more worrying because it suggests the whole food system is becoming overwhelmed, making it extremely difficult to resurrect the fortunes of any one foodstuff, let alone all of them, the report suggested. Certainly we can just substitute foods before the production begins to plateau and decrease.

Many believe this simultaneous peaking of the world’s basic foodstuffs is largely due to the massive population boom (world population is expected to reach nine billion by 2050), which is placing an ever-greater strain on the land for housing, agriculture, business and infrastructure. Quite simply, the demand is greater than the supply. The World Bank warned of this years ago and it continues to be a issue. As we continue down this unsustainable path, prices in food and other goods will only continue to climb, leaving many without the wherewithal to invest in healthy food choices for their family. Eating cheaper, less nutritious food will have catastrophic life-long effects on the social, physical, and mental wellbeing of millions of young people. We are already seeing this today. According to the last Census report, one out every five children is on food stamps – that’s more than before the recession. This is how many believe the powers that be will bleed the upper and middle class dry. Mac Slavo notes just how serious things have gotten for the middle class.

This chart, published by the London Telegraph, shows what has happened to Americans as they struggled to tread water and keep afloat after 2008. For the United States, there have been some signs of improvement, but mostly for those already on top. And the general decline in the global rankings of economic freedom and civil liberties does not complement the widening inequality, either. 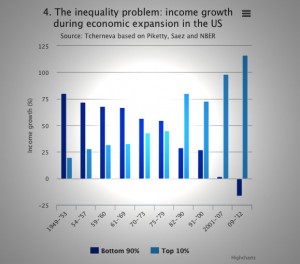 Moreover, in a recent article written by Michael Snyder of the Economic Collapse Blog, he cautions that the collapse in oil will also play a leading role in the destruction of our economy.

The key to how much damage this oil collapse is going to do to our economy is not how low prices ultimately go.  Rather, the key is how long they stay at these low levels.  If the price of oil went back to $80 a barrel next week, the damage would be fairly minimal.  But if the price of oil stays at this current level for the remainder of 2015, the damage will be absolutely catastrophic.

Build Out Your Lifelines

Clearly there are changes that are necessary in order to slow this impending fate. One simple change we can all make is to consume the food we purchase. Roughly 30 to 40 per cent of the food grown globally for human consumption never gets eaten. Eliminating waste would go a long way to feeding the growing population.

Another way to circumvent this inevitability is to begin limiting our dependence on grocery stores. Growing or raising your own food sources, learning skills to live self-reliantly, and bartering for goods and services will help you become more in tune with what your family needs to survive the food plateaus in the coming years. As well, consider these other suggestions for limiting your exposure to this potential game changer.

We Have a Choice

We stand at the brink of a precipice and the choice is yours to make.  Most emergencies don’t unfold slowly; unlike earthquakes or other natural disasters, we have had the benefit and the curse of watching the food crisis gradually come to light. What you choose to do with this information is critical and apathy doesn’t change the fact that immense, potentially life-threatening changes are on the way. Sooner or later our essential crops will stop producing and lifelines need to be in place. Those who are prepared are not only acting in the best interest of their families, but of society as a whole.  The investments we make today will be consumed and used tomorrow—we’ve been given fair warning and now is the time to rise to the occasion.