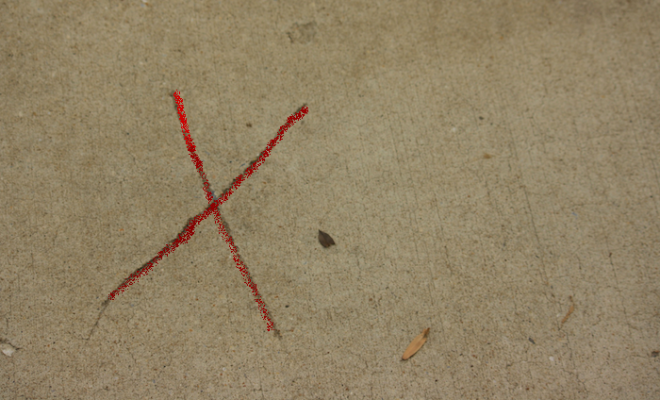 SAN ANTONIO, Tex. (INTELLIHUB) — Residents in at least two north-side neighborhoods have been scratching their heads and have even asked police to investigate after finding strange colored markings in front of their homes etched into the curb.

Shockingly residents found red and blue X’s painted, and in some cases etched out, on curbs in front of their homes which may possibly signify that the red and blue list round-up is nearing.

If you aren’t familiar with the red and blue list it essentially is similar to the Nazi’s round-up of the Jews, except it would take place here in America with American citizens which have been deemed dissidents.

A blue mark would signify that residents of the home be taken to a forced labor, FEMA, camp, as these people are not likely to go along with the government’s program in the event of civil unrest.

A red mark would signify that the residents of the home need to be terminated by militarized force, hunter-seeker teams, as they would have already been deemed enemy combatants of the state by a current or previous presidential, political, administration.

While is all of this is just a theory and has been a topic amongst conspiracy theorists for years, some are now questioning what is actually going on.

Sgt. Javier Salazar with the San Antonio Police Department told KSAT 12 that their intelligence unit is “looking into it” and is “well aware of the situation”.

While the Sgt. maintains that “it doesn’t appear anything sinister is going on”, residents are still leery and should be for good reason.

Additionally local utility companies conclude and have admitted that the markings are not theirs or anything typically used to mark underground utilities in the area as initially speculated by some.

Although police also have confirmed that the marking are not against the law all of this may dovetail with the fact that FEMA camps are popping up like wildflowers nationwide.

In fact the U.S. Department of Defense (DoD) in conjunction with the Department of Homeland Security (DHS) and the Federal Emergency Management Agency (FEMA) have been scouting for unused facilities, such as massive airport hangars and other structures, to be converted into FEMA camps as soon as possible to accommodate the massive influx of illegal aliens being shipped across the border via U.S. funded operations as I reported back in July of 2014.

If you or anyone you know has pictures or additional information on this subject please email [email protected].