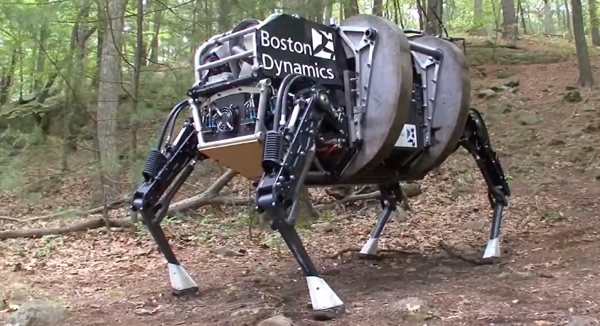 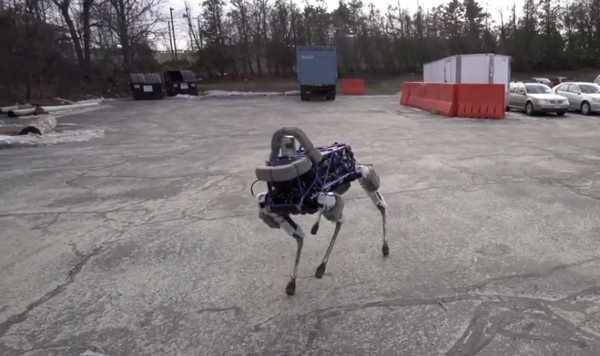 A new robot designed for the US Army by Google fits the criteria of a 2008 Pentagon request for the development of a system which could detect and track “non-cooperative” humans in “pursuit/evasion scenarios”.

Spot is the latest military robot developed by Boston Dynamics, which was bought by Google last year. The robot is far more agile than its larger predecessor, Big Dog, and can run around at high speed both outside and indoors.

Video footage of the new robot shows its ability to recover from being kicked, even on icy surfaces.

The fact that Spot can operate indoors is somewhat ominous given a 2008 Pentagon request for contractors to build, “A software and sensor package to enable a team of robots to search for and detect human presence in an indoor environment.”

The proposal called for the development of robots, “to search for and detect a non-cooperative human subject” during “pursuit/evasion scenarios,” directing that they have the ability to “intelligently and autonomously search”.

The New Scientist’s Paul Marks responded to the story by asking, “How long before we see packs of droids hunting down pesky demonstrators with paralysing weapons? Or could the packs even be lethally armed?”

Steve Wright, an expert on police and military technologies from Leeds Metropolitan University, also warned that such robots would eventually be armed.

“The giveaway here is the phrase ‘a non-cooperative human subject’.”

“What we have here are the beginnings of something designed to enable robots to hunt down humans like a pack of dogs. Once the software is perfected we can reasonably anticipate that they will become autonomous and become armed.”

“We can also expect such systems to be equipped with human detection and tracking devices including sensors which detect human breath and the radio waves associated with a human heart beat. These are technologies already developed.”

Robotics Professor Noel Sharkey has also repeatedly asserted that the robots being developed by Boston Dynamics will eventually be used for crowd control and to hunt down and kill people.

“If you have an autonomous robot then it’s going to make decisions who to kill, when to kill and where to kill them,” Sharkey told the Alex Jones Show. “The scary thing is that the reason this has to happen is because of mission complexity and also so that when there’s a problem with communications you can send a robot in with no communication and it will decide who to kill, and that is really worrying to me.”