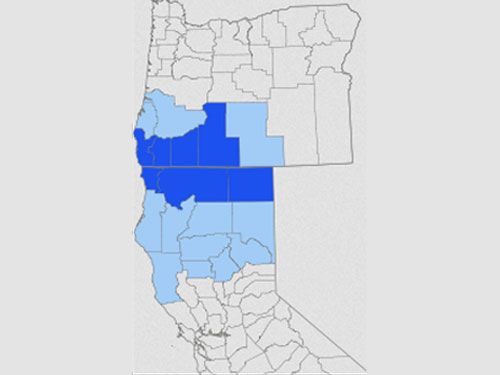 A group of citizens from northern California and southern Oregon have come together to push for their counties to break off into a 51st state they want to name Jefferson.

They gathered in Sacramento on January 15, 2015 to deliver a few more declarations of withdrawal from California counties.

The idea was first floated in 1941 when Port Orford, Oregon’s mayor Gilbert Gable proposed the Oregon counties of Curry, Josephine, Jackson and Klamath should leave Oregon and join with California counties Del Norte, Modoc, and Siskiyou to form a new state named Jefferson. They inaugurated a governor, and even drew up a Proclamation of Independence and began holding demonstrations where they seceded every Thursday.

The movement has been revived and now includes the original counties and the modern-day additions of the lighter colored counties in the map above.

“What we’re doing here today is we’re delivering declarations to the secretary of state, to the senate pro tem, and to the assembly pro tem for the purpose of withdrawal for three more counties to withdraw from the state of California and form the state of Jefferson,” State of Jefferson Spokesperson Terry Raposa told Reason.

Raposa says everyone wants liberty and the group does not feel their respective state governments adequately represent them.