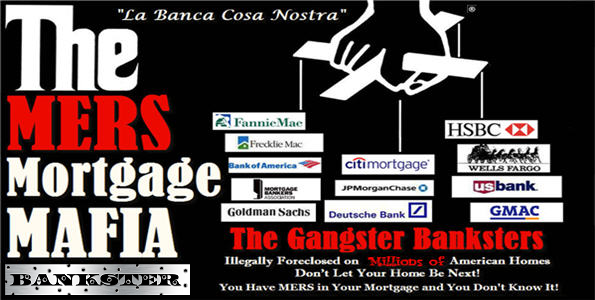 The move to confiscate all privately held wealth in the United States is well underway. In the past few years, we have experienced bail-outs, planned bail-ins, Treasury Secretary Jack Lew is positioning to confiscate all 401k’s and pensions and now the MERS mortgage fraud is accelerating to new heights thanks to a rash of recent State Supreme Court decisions affirming the Mortgage Electronic Registration Systems (MERS) right to foreclose on your home without having recorded a valid title and the foreclosure can take place outside of a courtroom.

For the past 230+ years, the Constitution protected property rights from would-be feudal lords who would suddenly appear with a title to your home and force you out. This practice worked well until the introduction of the MERS Mortgage fraud.

MERS was a conglomeration created by the megabanks for the purpose of administering mortgages. The practice quickly got out of control as one’s home mortgage title could be transfered dozens of times without notifying the homeowner. The practice quickly turned illegal when a homeowner, unknown to them, would be paying their mortgage to a title company that no longer held the title to their home. Then, the title company which currently held the note would show up and lay claim to the home in a repossession proceeding. In some cases, people with completely paid off mortgages had their homes stolen. Eventually, the people pushed back.

Show Me the Note

Eventually, activists like Dave Kreiger, author of Clouded Titles, began to train local officials on how establish a chain of custody on a title. Eventually, the “Show me the note” strategy worked well in court as long as one had an attorney and many illegal foreclosures were headed off.  Then MERS restored the illegal practice of “Robo-signors” in which people off the street were paid to forge a homeowners signature on a series of title transfer documents. The issue of illegitimate foreclosures were at a stand off. However, at least homeowners would have their day in court and they could challenge the legitimacy of the title transfer documents.  Recently, because MERS parent organizations of Wells Fargo and Bank of America have begun to exercise undue influence in the State Supreme Courts all across this nation, every homeowner is potentially in peril.

A rash of State Supreme Court decisions ranging from Illinois, Pennsylvania, Rhode Island,New Hampshire, California, Indiana, Washington, Colorado and most recently Washington and West Virginia have overturned lower court decision which demanded that MERS produce a chain of custody for titles and that all foreclosures must take place in court. Unfortunately, MERS no longer has to take you to court to steal your property. They no longer have to file a deed of transfer with the court. Thanks to these rulings, they can simply show up and seize your property based upon fraudulent or flimsy evidence. These recent decisions are setting a precedent all across the country for other courts to follow.

From Fascism to Feudalism

The late Aaron Russo made a documentary entitled America: From Freedom to Fascism. Russo was correct, America has been under the control of corporations and the banks. However, Fascism is preferable to what we now face. With the ongoing elimination of private wealth across this country, I would entitle the trend cure to be, America: From Fascism to Feudalism.

MERS Is Flaunting Their Criminal Behavior

Because I have been an outspoken critic of MERS, I find it interesting that MERS chose to include me in their email distribution list in which they bragged about yesterday’s West Virgina’s Supreme Court decision which does not require MERS to demonstrate a chain of custody or a mortgage title and MERS can foreclose outside of court. Here is an excerpt of the press release.

“Reston, Virginia, February 10, 2015—MERSCORP Holdings, Inc. today announced that the Supreme Court of Appeals of West Virginia held recording statutes in West Virginia do not require that the assignment of a trust deed be recorded in the office of the clerk of the county commission.”

The United States is quickly descending down the path of serfdom in a 21st century application of modern day feudalism. We are witnessing the rapid decent of what once was the most dynamic and wealthiest empire in the history of the planet, to a country which will soon be labeled as a Third World country. These times are marked by the elite moving to own everything and using the power of the government to accomplish their end-game. Congress is complicit as is the judiciary.

When America emerges from the coming economic collapse, the middle class of this country will own nothing. We will all find ourselves living on the feudal manner with no property rights, bank account or pension. We will soon awaken to the fact that our Constitution is dead and with it all of our rights. And amazingly, we did virtually nothing to stop it.

Reston, Virginia, February 10, 2015—MERSCORP Holdings, Inc. today announced that the Supreme Court of Appeals of West Virginia held recording statutes in West Virginia do not require that the assignment of a trust deed be recorded in the office of the clerk of the county commission.

In State of WV v. Warren McGraw, the Court disagreed with Wyoming County’s claims that the recording of trust deed assignments in county record books is required by state law, “in order to clear title to properties in the Counties.” While the Counties did not name MERSCORP Holdings, Inc. or Mortgage Electronic Registrations Systems, Inc. (MERS) as a defendant in the case, the allegations in the complaint were focused on challenging the operations of MERS and the MERS® System.

In his opinion, West Virginia Supreme Court of Appeals Justice Menis E. Ketchum II said that “recording statutes in West Virginia do not require that the assignment of a trust deed be recorded in the office of the clerk of the county commission.”

“We are pleased that the West Virginia Supreme Court found that the lower court – the Circuit Court of Wyoming County – exceeded its jurisdiction in denying the Trustees’ motion to dismiss and is directed to dismiss the County’s action with prejudice,” said MERSCORP Holdings Vice President for Corporate Communications, Janis Smith.

For descriptions of cases and other materials pertaining to MERS’ business model and role in U.S. housing, please visit www.mersinc.org.

MERSCORP Holdings, Inc. is a privately held corporation that owns and manages the MERS®System and all other MERS® products. It is a member-based organization made up of thousands of lenders, servicers, sub-servicers, investors and government institutions. Mortgage Electronic Registration Systems, Inc. (MERS) serves as the mortgagee in the land records for loans registered on the MERS® System, and is a nominee (or agent) for the owner of the promissory note. The MERS® System is a national electronic database that tracks changes in mortgage servicing and beneficial ownership interests in residential mortgage loans on behalf of its members.