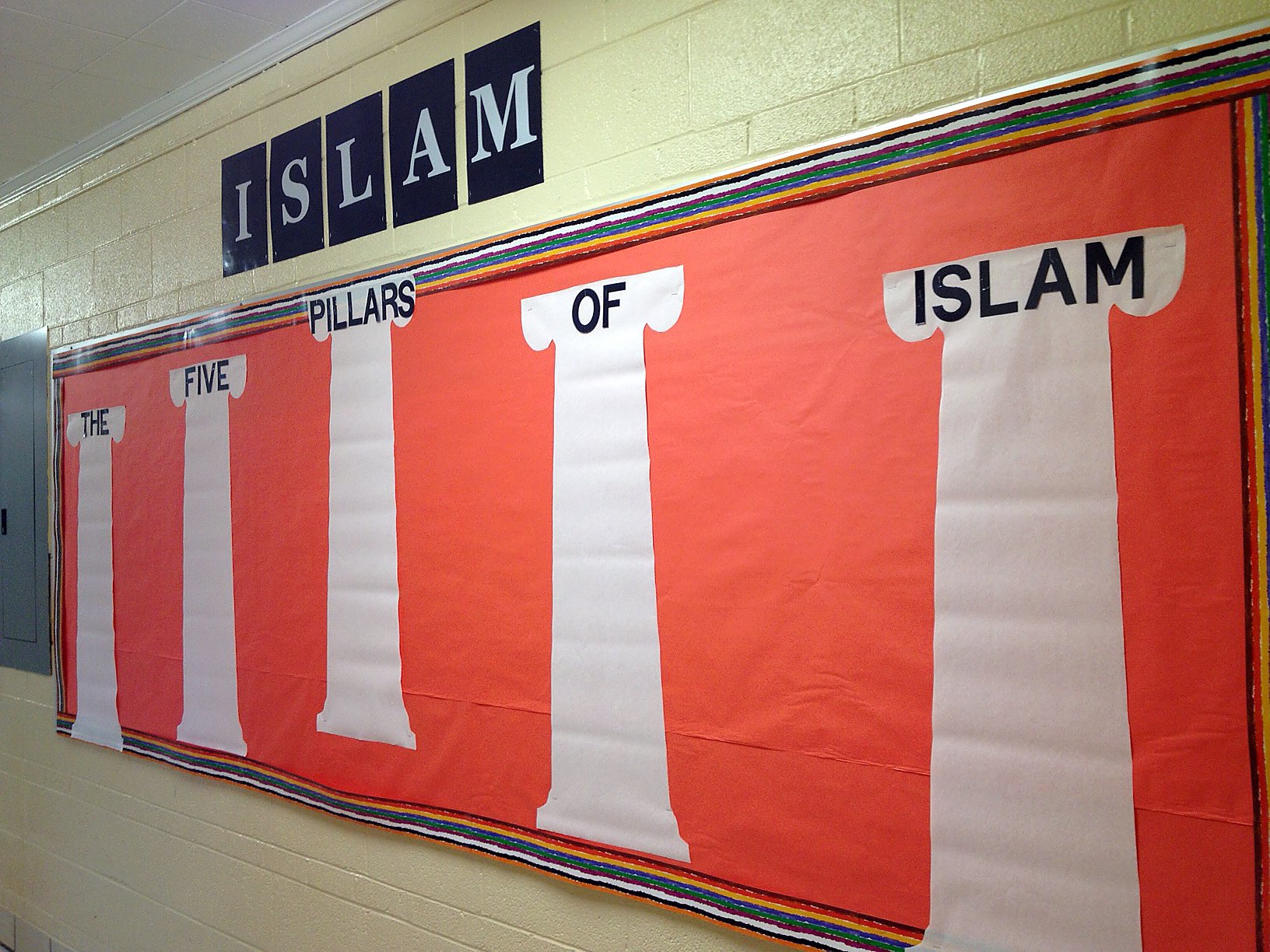 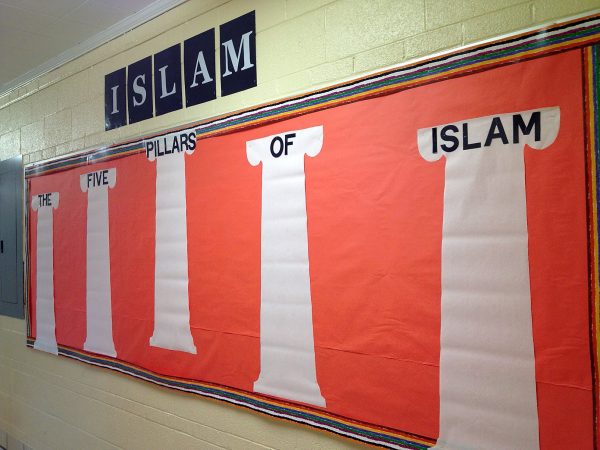 Seminole County’s Lyman High School is being called out for its blatant Islamic indoctrination by a student’s father. Ron Wagner read, “There is no god, but God, Muhamad is the messenger of God.” However, he wasn’t reading from the Koran, The Five Pillars of Islam or the Hadiths. He was reading from his son’s 10th grade world history textbook. Even more concerning is that the school district not only stands by the curriculum, but have the full support of designated terror group Hamas-CAIR (Council on American-Islamic Relations).

As an introduction to what is going on, Wagner of Seminole County told WFTV’s Daralene Jones that the school is “requiring our kids in our public schools to learn Islamic prayers.”

“Students were instructed to recite this prayer as the first Pillar of Islam, off of the board at the teacher’s instruction,” Wagner alleged.

Understand that Wagner doesn’t claim to be a Christian. In fact, he claims to not be religious, even though Scripture says otherwise (Rom. 1:19-25). However, he points out that the school is way out of line in its presentation of Islam. Though unaware of just how much of Islam was being taught in his son’s school, his eyes were opened when he discovered a text on his son’s cell phone from his teacher which reminded him to study an Islam packet and complete a prayer rug assignment.

“For it to be mandatory and part of the curriculum and in the textbooks, didn’t seem right,” Wagner said.

Ya think? Let me interject that many parents don’t know what is going on in their children’s public indoctrination centers. They are too busy working to do so instead of teaching and training them at home where they are absolutely sure about what is being taught to their children.

Wagner told Jones that Dr. Michael Blasewitz, the overseer of the high school curriculum said, “The Pillars of Islam are benchmarks in the state curriculum.”

Though an investigation by the school district (a school district should never be investigating itself) determined that no wrongdoing had taken place and claimed that there was no attempt to indoctrinate or convert students, Jones decided to interview Dr. Blasewitz concerning the curriculum and whether or not it would be changed. His response is quite telling.

However, he went on to say, “In the middle school years, students don’t study enough of Islam.” And why should they? Islam is not foundational to Western culture, unless you teach the brutal nature of Islam advanced against Christendom in the establishment of the Ottoman Empire. The reason for such teachings would be to warn children of the dangers of Islam. However, providing assignments for prayer rugs is not world history education and neither is the recitation of Islamic prayers. That, just cannot be justified.

Dr. Blasewitz believes that things are far more “skewed” to the other side, meaning Christianity and Judaism. In fact, he said, “If anything, it’s a little imbalanced towards Judaism and Christianity because even when you get beyond that unit on Islam, you move right along into another unit and the focus of that unit is Christianity.”

However, he said that teaching about the Christian faith isn’t actually done in that unit because, in his words, “Christianity has already been taught.” This makes one wonder first, what was taught as Christianity and second, is the unit’s teaching on Islam an actual teaching of Islam.

Jones asked Blasewitz why it was ok for the school to teach extensively on this subject and he countered that it wasn’t extensive, but his earlier comments indicate that the course on Islam is more extensive than Christianity or Judaism at the 10th grade level. He claims that “it’s just a small unit in a thirty-six week course.”

Blasewitz points out that religion is woven into the fabric of our lives and when it impacts culture it needs to be taught as history. However, one does have to wonder if the truth about Islam is being taught. I can almost guarantee it is not. It is presented in a favorable light at every instance we have seen in the past when it has crept into the public education system.

“Benchmarks” and “standards of the community” are what Blasewitz cited, along with the standards set by the state for what they have in their curriculum. While he says that the basics of Islam will never disappear from the curriculum, he never addresses how Islam fits into world history, which is more concerning because of the trail of blood the totalitarian ideology has left in its wake and continues to spread even in modern times.

When challenged that Sabir Mansuri of the Council on Islamic Education, a Muslim Brotherhood front group, had reviewed the textbook and was happy that Islamic indoctrination was occurring via the textbooks, Blasewitz dodged the challenge saying that the unit was not that and said, “I resent the implication” that Jones made.

But Jones pushed back saying that teaching the Five Pillars of Islam does lead to indoctrination, to which Blasewitz said, “You’re certainly welcome to that point of view,” but could not argue against it.

The resounding message of Dr. Blasewitz was a claim that the teaching on Islam meets “benchmarks they are required to teach.” In fact, does any one of these bureaucrats actually sit down and read the textbooks to know what’s in them and if they actually meet or fail to meet said “benchmarks”?

In fact, when asked about the specifics, Blasewitz said, “It’s not appropriate for me to comment.”

Jones then went on to ask a follow up question about modifications and how the curriculum is taught that should be public knowledge, but Blasewitz then became belligerent with her claiming that she was asking questions in an “accusatory” manner, which she was not.

While an answer is important to the story, Blasewitz said it wasn’t and he took his microphone off and got up and left the interview at that point.

“You’re just going to walk away from our interview when we’re trying to get information,” asked Jones.

I contacted Ms. Jones and she told me that she had been instructed by her supervisors not to speak to anyone in the national media on this issue. Apparently WFTV can put out the video interview and the text of Jones’ article, but they are unwilling to allow her the freedom to answer questions from the national media. It makes you wonder who is putting the screws to WFTV.

The designated terror group Hamas-CAIR provided a statement to WFTV:

“In a diverse society, young people should be taught about a wide variety of beliefs, cultures and faiths, and particularly about a faith practiced by millions of Americans and more than one fifth of the world’s population.

“Denying all students access to vital information based on the biased political or religious agenda of Islam phobic groups or a handful of misinformed parents does a disservice to our school system, our state and our nation. History is not kind to those who censor information or ban books.”

One has to ask, what business does the state have teaching anything? Has God delegated that authority to them, or to parents? The Bible is clear. Deuteronomy commands the parents to be their children’s teachers, not the state. There is the root of the problem. Attempting to reform what is corrupt at the base will only end up with more holes to plug on the sinking ship of public education.