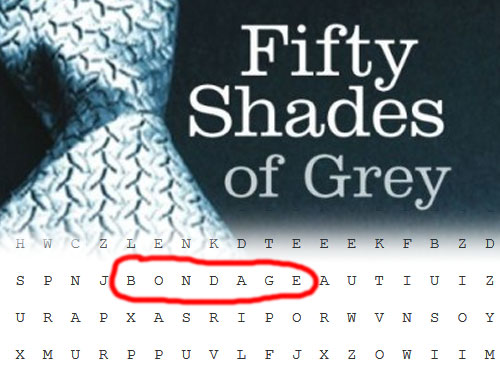 So now this happened. (How many stories about the downfall of our public education system like this one am I going to start with that sentence?)

The puzzle included words like “bondage,” “submissive,” “leather cuffs,” “intercourse,” and “spanking” among others.

James Carter said the word search, filled with explicit sexual terms, was passed out Monday to his son and other students in his eighth-grade class at Monessen Middle School.

“I asked my son who passed it out, and he said the teacher passed it out,” Carter told said. “I don’t think this is what they should be doing in the eighth-grade level.”

Carter said he went to the school Tuesday afternoon but administrators wouldn’t answer his questions about the word search. (source)

They wouldn’t answer his questions because he wanted to record the conversation, according to other reports.

The first movie of the trilogy is now showing in theaters, and according to news reports, 20 minutes of the 100-minute film are straight sex scenes. The novel itself is home to lines like, “My tongue swirls around the end. He’s my very own Christian Grey-flavored popsicle. I suck harder and harder … Hmm … My inner goddess is doing the merengue with some salsa moves,” and “I don’t remember reading about nipple clamps in the Bible.” You know. Stuff like that. (Well, okay, that’s the more G-rated stuff in the book, but you get the gist.)

Carter later went to the school board, but he was then told they could not comment either because it was a “personnel and student matter.” (So much for parent’s rights in schools. There apparently aren’t any, especially when it comes to sex education.)

Officials have not released the name of the teacher who gave out the puzzles. Leanne Spazak, Monessen superintendent, told AP the investigation is “ongoing.” How big is this school anyway? How long does it really take to figure this out? We’ll see how long that excuse lasts. These people are educators but they can’t put one and one together and get two?

Parents continued to complain about it at Tuesday’s school board meeting. An email has since been sent out claiming the whole thing was just a big “mistake.”

Who mistakenly prints out multiple copies of a sexual word search and hands them out to kids? That’s a lot of effort for a mistake.

Teachers who do ridiculous stuff like this always come out later and say, “Oh, sorry, it was an error in judgment.” Are you kidding me? If you are the kind of person of the mental fortitude who is prone to making errors in judgment this ridiculously bad, then it goes without saying “teacher” is probably not the job title for you.