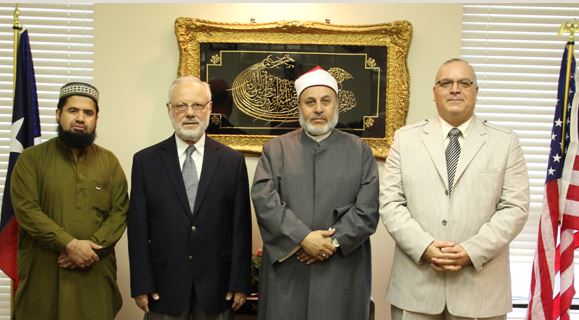 The Islamic Tribunal, set up in North Texas to hear cases under Sharia law for followers of Islam, has hit a bump in the road. On their website, through an image captured by Lawrence Jones, the four individuals named to the tribunal were listed as “attorneys” even though not all of them had law degrees.

As Lawrence Jones told Dana Loesch on her television program Tuesday, “You cannot say that you’re an attorney in the United States of America, and you have no documentation – especially in Texas.”

According to The Blaze:

Jones filed a complaint with the Texas Unauthorized Practice of Law Committee, which is appointed by the Supreme Court of Texas and charged with preventing the unauthorized practice of law.

As of Wednesday, the site appears to have removed the word “attorneys.”

Jones said, “I called the state and I called the chair, I actually spoke with him today. He made it very clear that they had received my complaint. We were one of the first to actually get that complaint in. And there is a large group of people that are bringing this same concern.”

Jones, one of the only reporters allowed inside the “Stand with the Prophet” event in late January, had concerns that this tribunal would “follow in the footsteps of some in Europe and begin wading into criminal matters,” even though the tribunal has declared their intent to deal solely with civil matters.

Now the site indicates these individuals are “judges.” They certainly are not “judges” in any sense of the word as is commonly known through the US judicial system.

The question every American citizen should be asking is, “Why was this allowed to be started in the first place?”

Every state has civil laws along with criminal laws. These laws are based on the United States Constitution and the respective states’ constitution. As a nation that exists on one of the founding principles that “all men are created equal,” our laws are written to uphold that principle meaning everyone is equal when it comes to the law regardless of religion, gender, socio-economic status, nationality or creed. Our foundation was such that no man could be disparaged against or favored because of conflicting tenets that might be found in differing cultures.

From the teachings of Mohammed, the testimony of a woman is worth half of one man. So, in civil matters this “tribunal” seeks to oversee in subversion of our civil laws, a woman testifying against a man has very little weight. By allowing this tribunal, North Texas has taken a stand to say that a woman, who is Muslim, is by virtue of religion a second-class citizen non-deserving of the equal protection of the laws of the state and the federal government. Let’s not forget that non-Muslims are even lower than women in Islamic Shariah.

Islamic Shariah law is skewed in favor of the male members of Islam. Not only are women at a disadvantage, but female children are as well. In civil matters such as divorce, child custody, personal injury, negligence, and property disputes along with a host of other civil matters, women have the deck stacked against them under Shariah. Non-Muslims are disparaged as well under their law.

These Muslim “men” are only seeking to keep their perceived superiority. It is offensive to them that a woman, or any non-Muslim, would hold the same standing under the law as a Muslim man. The only way to subvert the “equality under the law” here in the United States is to convince or coerce the politically correct imbeciles in government positions to sanction a “tribunal” for civil matters based on Islamic Shariah law. By doing this, these government idiots allow inequality to exist because of a tenet of religion thereby going against the very foundation of our founding.

Wonder how long it will take the atheists to hop up and say they need a special “tribunal” to hear their civil matters? Better yet, what about the LGBT community? Maybe the secular humanists would like to weigh in with their own “tribunals” since the Supreme Court declared that group to actually be a religion. And, of course, we can’t leave out the “religion” of the environmentalists, Satanists, pagans and any host of others who have formed false religions. Where does this all stop once one pseudo-religion is allowed a “special tribunal” for “their” civil matters? And, now that this has been allowed to take hold. How long before this one little tribunal in Texas seeks to insert its influence into criminal matters?

If that is allowed, it won’t be long before it hits the “mainstream” justice system, affecting every individual in this country. While this may sound farfetched, look at the political correct liberal appeasing judges that already sit on the bench.

What happens when a civil dispute arises between a Muslim and a non-Muslim? Does the Muslim “tribunal” have jurisdiction or does the dispute go to the US judicial system? Could not the Muslim demand to have his case heard under the tribunal since one is in existence in North Texas? After all, the Muslim could assert the US judicial system has no authority in his dispute as he is a Muslim, even when it is against a non-Muslim.

Now that this tribunal exists, – yes, let’s go there – are we about to witness “Shariah Zones” pop up in the great State of Texas? You can bet your sweet bippy that once an inch is given, the taking of the mile is coming. After all, Muslims may assert that they cannot live under two conflicting judicial systems.

A host of problems are sure to follow in North Texas and the rest of the US with this “tribunal” establishment. Practitioners of Islam cannot serve two masters. They cannot live in a country like the United States and follow its laws as Islam has its own set of civil and criminal laws. It is an egregious totalitarian political judicial system that hides itself under the cover of religion. These followers of a pedophilic, war-mongering mad man seek not to assimilate but to conquer all people and rule them under barbaric principles steeped in bigotry, misogyny, hate and vile evil.

Interesting that these idolaters chose the great State of Texas to gain a foothold for their “tribunal.”

This is what comes of a country when part of the population buys into “multiculturalism” and those who bought the fodder are placed in positions of power. How many countries in Europe are we witness to the “joy of multiculturalism?” Native populations are suffering at the hands of those who will not assimilate – mainly Muslims.

Here’s a good suggestion for Muslims who want to follow and abide by Shariah law – US citizen or not – move to a country that practices it as you are free to do so. If you don’t want to do that, sit down, shut up and abide by the laws of this nation and the state in which you live. Everyone else does.