President Obama has repeatedly said that U.S. troops would not be sent into harm’s way to fight ISIS and those who are in the region are there to only provide training and advisory support.

But what would happen if Islamic State militants were to directly attack a military base housing several hundred American troops?

Would that be justification enough to put American boots on the ground?

We may soon find out. According to reports from Iraq the Islamic State has taken control of a town just two miles from a military installation in Ayn al-Asad base.

A group of Islamic State militants penetrated an Iraqi air base where U.S. military advisers are training Iraqi forces, the first time attackers have gotten beyond the outer perimeter of an Iraqi base being used by American trainers. (Wall Street Journal)

Security forces reportedly killed 8 Islamic militants who had breached the outer perimeter of the base, but it has been reported that a larger contingent of Islamic State militants are just two miles away in the city of Al-Baghdadi, which has been highly contested in recent months. Reports from the area are mixed, with some news agencies saying that I.S. members have been driven from the town while others say that the Islamic State still has control over much of the town. 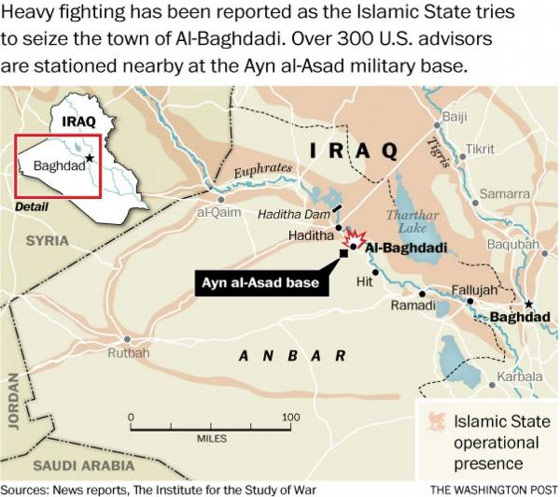 Given President Obama’s recent request for war approval against ISIS, it seems that the United States is preparing to go into the region full-force yet again.

With public opinion of Obama’s wars waning, one can’t help but consider that an attack on U.S. soldiers would be enough to get the American propaganda machine back in full swing.

Of course, any such offensive by Islamic State militants would be met with heavy fighting as it has been reported that over 300 U.S. marines are on the base.

The United States would likely send additional support should an attack be imminent.

Then again, when the U.S. embassy in Benghazi, Libya came under attack leaving four Americans dead, it was reported that the Obama administration completely ignored calls for help. There was reportedly a Delta Force detachment on alert and ready to deploy to Benghazi but their requests to assist were denied by the administration.

Thus, it would not be one bit of a surprise to suggest that certain elements within our government would gladly facilitate an attack on a military base housing U.S. soldiers.

A few hundred dead Americans is just a drop in the bucket if it means that the military-industrial complex can continue to show record profits.