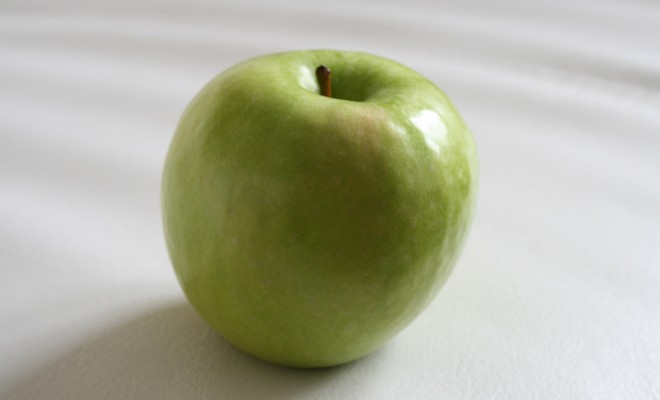 (INTELLIHUB) — As if the world of genetically modified foods isn’t scary enough, a new apple was just approved to be grown in the U.S., one that will not bruise or brown when sliced.

While this may sound good for growers, shippers, and store owners as they will have less damaged product in the long-run, it’s not good news for the consumer who will be eating the potentially dangerous frankenfood.

Just like any other genetically modified food the final outcome is not benevolent in any way. In fact humans and especially big corporations like Monsanto and companies like Okanagan Specialty Fruits, the developers of the new GM apple, have no business playing God. After all when it comes to nature what ever happened to letting the cards fall where they may?

However, while the developer may think life is peachy, consumers may not approve of the newly modified product and reject it at the checkout counter which is yet to be seen.

“In the marketplace we participate in, there doesn’t seem to be room for genetically modified apples now,” said John Rice, co-owner of Rice Fruit Company in Gardners, Pa., which bills itself as the largest apple packer in the East.

The Department of Agriculture, which approved the apples for commercial planting, said on Friday that it had considered these issues. However, it said that under the law, approval is based on whether a genetically modified crop poses a threat to other plants. The department determined that the apples posed no such risk., as reported by theNew York Times.

What is particularly scary about this is that the new “Arctic apples” will act like food that can be found at McDonald’s which doesn’t breakdown or decompose naturally as it should, causing concern amongst some as they wonder how the bodies digestive tract will handle the long-living artificially designed food.

Although it may take years for the new frankenfood to be widely available to consumers, the owner of Okanagan Specialty Fruits, Neil Carter, said that “four growers would plant a total of 20,000 trees this spring, covering a mere 20 acres or so. From 5,000 to 10,000 pounds of apples are expected to be ready by the fall of 2016, enough to provide samples to food service companies and other potential buyers. The product could reach stores, in very small quantities, in 2017, he said.”

But ultimately, according to reports, the new Arctic apples were actually pushed by “silent supporters”, which could literally mean anyone or any corporation, including Monsanto could be backing them.

Moreover Carter is pushing to label the Arctic apples “non-browning” rather than “genetically modified” which he claims will ‘demonize’ the product in the minds of consumers. While this may be true, the push is a sham to trick the minds of consumers using a standard method of doublespeak.

The new GM apples should be available in stores and ready for consumption in the next few years.

GM apples that resist browning approved by US govt — RT