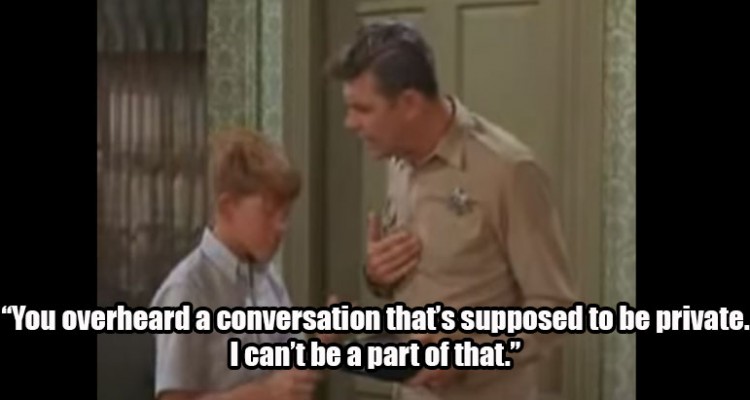 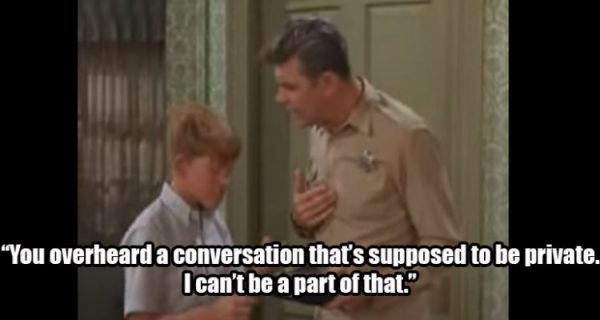 A short clip from the Andy Griffith Show has been making the rounds on the web, and for good reason.

The clip shows a young Opie, (Ron Howard), and Andy Taylor (Griffith), discussing a recording that Opie had obtained from the jail cell.

Griffith explains to Opie the unjust reasoning behind recording a conversation that is meant to be private, no matter who is involved, or what crime they’re suspected of committing.

The short clip is disheartening for those of us who have been watching citizens’ rights be devoured in the name of fighting the state’s ever-changing and contrived boogeymen.

Despite the myriad of boogeymen the state devised throughout the 1960’s, pop-culture still portrayed the role of law enforcement with honor and morals.

“You overheard a conversation that’s supposed to be private. I can’t be a part of that,” Andy says in reference to the eavesdropping young Opie had just conducted.

Nothing could be further from that example today.

Due process is but a fleeting memory in the heads of most Americans. Sadly, the majority thinks that government spying on them, “keeps them safe.”

However, having nothing to hide is no defense from the brutal machine known as Police State USA. A quick search through the Free Thought Project archives will prove that innocence, cannot and will not protect you from the modern day iron fist.

Tyranny in the 21st century alone has exploded. Prior to September 11, 2001 the TSA did not exist, indefinite detention did not exist, the NSA did not spy on American citizens, the police weren’t given armored assault vehicles, and Americans could not be assassinated without trial.

Sadly these atrocities have simply become an accepted reality. However, there is a small but growing, irate and tireless minority who choose not to accept this reality — we are the resistance.

Through the spreading of peaceful ideas and seeking a lesser ignorance, the liberty movement has been catching, like wildfire.

Once the patriotic blinders are removed through refusing to consume the fear mongering propaganda of the state, this brutal Leviathan cannot be unseen.

The video clip below serves as a benchmark to illustrate how much freedom the American population has surrendered over the years.

Comparing this decades-old clip that glorifies the protection of rights, to today’s television shows that promote torture, war, and militarized police forces, should shock the conscious.

What the hell happened America? What the hell indeed…. Share this article and video to show those on the verge of seeing the police state, just how far gone we actually are. Only after we accept that something is wrong, can we do anything to change it.