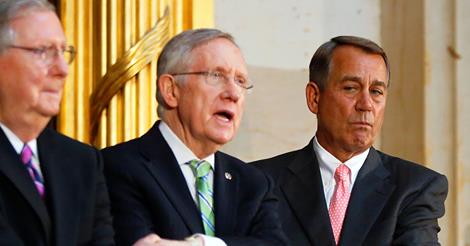 According to the Daily Caller, the Senate Democrats have used every tool they have to defend Obama’s illegal, unconstitutional action on amnesty, “including emotional threats to civil society, dire warnings of another 9/11 atrocity, and campaign-style hits against four wavering Republican senators.”

Surely, Democrats aren’t indicating some type of “event” would occur should the Department of Homeland Security lose the amnesty funding. After all, DHS has received funding for all of their “other” activities that “keep Americans safe” and have thwarted untold numbers of terrorist attacks. What a joke. DHS has thwarted about as many “terrorist” attacks as my Aunt Fanny.

While the Democrats are using the big gun style of arguments, the GOP responds with “cap gun” tactics that have failed to sway the several Democrats who partially opposed Obama’s amnesty action. Their use of stoic floor speeches, continually highlighting Obama’s amnesty as illegal and unconstitutional, along with their drama-free press conferences with a media that eats from the hand of Obama and Democrats, have done little to make a “nick” in the Democrats’ triple-filibuster of the DHS 2015 budget. No Democrats have changed their position on amnesty, even though Democratic seats were lost in the Senate in November partially over the unilateral amnesty action by Obama.

Compared to the aggressive fight waged by the GOP to win the Keystone Pipeline, the GOP fight on funding the DHS minus appropriations for amnesty looks like almost no fight at all. One Hill staffer amounted the GOP’s action to “nothing, nada, zilch.” This has cause many Republican representative in the House to become angry at the Republican impotence in the Senate.

Alabama Rep. Mo Brooks said, “Senator McConnell has engaged a half-hearted effort to date… in a policy of surrender without fighting.”

The ineffective strategy by Senate Republicans gained the spotlight when Illinois Senator Mark Kirk reversed his stance. On Tuesday, Kirk “sharply criticized the Democrats’ opposition to any defunding of Obama’s amnesty.” Kirk stated, “If there is a successful attack during a DHS shutdown – we [Republicans] should build a number of coffins outside each Democratic office and say, ‘You are responsible for these dead Americans.'”

In only one day, Kirk flipped and repeated the sentiment of Sen. Chuck Schumer stating, “I generally agree with the Democratic position here. I think it’s the wrong battle for us at the wrong time.”

Well, Sen. Kirk, when is it a good time to battle for Americans’ jobs and the sovereignty of our nation – after, it’s been given away?

Not surprisingly, Kirk relented because of video attack-ads and “rolled out push-polls” by a coalition of progressive groups.

Kirk told Talking Points Memo that the GOP shares the blame for the impasse over DHS. Kirk stated, “Had I been consulting, which I wasn’t, I don’t think we should have ever attached these issues to DHS funding. I always thought the burden of being in the majority is the burden of governing.”

Kirk faces a tough 2016 re-election battle in Illinois and indicated this battle over DHS immigration funding would not hurt his re-election bid.

Someone needs to educate Kirk that the “burden of governing,” according to our founding principle, is to secure individual unalienable God-given rights, legislate within the enumerated powers outlined in the US Constitution, and secure life, liberty and the pursuit of happiness for all citizens of this nation, whether or not one party or the other holds the majority. What arrogance to think his position cannot be jeopardized. But, again, is this not the prevailing attitude in our elected officials – arrogance?

Unfortunately, the GOP has not responded with the same tactics against vulnerable Democrats, even though Obama’s amnesty allows millions of jobs that could be awarded to Americans to go to illegals, “huge tax payments to go to illegals for the work they did illegally while they were in the country illegally,” and provides enrollment into the Social Security program. This amnesty debacle favors companies’ use of legal and illegal immigrants over American workers when Americans are experiencing a high rate of unemployment.

But, what can Americans expect when the big corporations make huge campaign donations to both Democrats and Republicans. In order to keep their cushy positions, both parties will pander to the “wants” of big money while appearing to advocate for “we the people.” Is there any other explanation for the almost passive opposition by Republicans to the aggressiveness by Democrats on unconstitutional, illegal executive amnesty? As someone has so eloquently pointed out, “follow the money.” Is it any wonder the GOP sticks to the “technical” reason to oppose Obama’s amnesty – unconstitutional and illegal by executive order – instead of condemning this high immigration policy as detrimental to Americans? We all know that increased immigration is favored by the GOP business donors and Democrats need to expand their voting base to crush the opposite party.

The GOP has no one to blame but themselves for this battle occurring in the Senate. Last year, public opposition and Speaker John Boehner blocked the Obama amnesty, which catapulted Republicans into Senatorial seats. However, Boehner caved when Obama announced illegal, unconstitutional amnesty by executive fiat on November 20th by not including language in the “crummy bus” resolution to defund amnesty.

Heritage Action for America stated in a Feb. 11 memo that the GOP “must deliver a single, unified message: President Obama and Senate Democrats are willing to deny border patrol agents their paychecks to ensure illegal immigrants get Social Security numbers.”

The GOP should also deliver the message that unconstitutional, illegal, executive amnesty would “provide work permits to five million illegals and end repatriations for 12 million, even though millions of Americans have fallen out of the workforce since 2000.” Companies are experiencing near record profits while Americans’ wages have stalled. While Obama’s economy has only created 9.3 million jobs since 2009, “Obama has flooded the labor market by adding more than 11 million working age migrants to the economy” during the same period.

The GOP should continue to out Obama’s amnesty as unconstitutional and illegal, since the executive does not have the authority to make legislation. But, at the same time, GOP leadership must expose Obama’s amnesty as being unfair to Americans and detrimental to the nation. This is not a Democratic or Republican issue, but an American issue that will affect both Democrat and Republican supporters.

While many Democratic Senators tout these are “dreamers” or “distraught child valedictorians” that must be saved, parade vivid images, issue threats of death and slaughter, and accuse Republicans of “holding a gun to the head of America and saying unless you do it our way, we’ll shut down the government,” the GOP continues on the “high road,” only without so much as a peep of the repercussions to American workers.

Even though Americans are “overwhelmingly” opposed to Obama’s amnesty, their voice is not being heard by the GOP and is being flat out ignored by Democrats. But, what else is new when illegal alien invaders can occupy the offices of Rep. Jeff Sessions of Alabama and Senator Ted Cruz of Texas with impunity while Americans are lucky to get staff members to “hint” at citizens being able to see their elected officials with a “we’ll let them know and get back to you” response. If anything, this speaks to how far the House and Senate have sunk. No longer are duly elected officials in Washington representing the citizens who elected them; they are now representing millions of illegal alien invaders to the detriment of the voters who placed them in office.

Would any American, Democrat or Republican, be willing to forego or relinquish a job to an illegal alien invader or one who receives executive amnesty? One would hope not. By the same token, would an unemployed American, Democrat or Republican, choose to remain unemployed to champion illegal unconstitutional amnesty for illegal aliens? Again, one would hope not; but, a coalition of progressive groups are pulling out all the stops to make sure amnesty sticks. You can bet that big money corporations, the lame stream enemedia corporations, and head in the sand Americans will continue to push for amnesty and get it.

America has ceased to be a constitutional republic; we are not even a democracy. America has transformed into an oligarchy with Washington being controlled by mega-corporations, the banking cartel, and big money donors. Our duly elected representatives shun citizens while they cater to lobbyists, campaign donors, terrorist groups, and illegal aliens.

It’s time to flood our Senators with faxes, emails, and phone calls and demand opposition to Obama’s illegal, unconstitutional amnesty by pushing our Senators passing the DHS funding that excludes appropriations for Obama’s amnesty. Then, Americans who are interested in taking our country back from the hands of the oligarchy should join AmericaAgainNow and support efforts to hold these charlatan politicians accountable. Think of it this way: are you as American citizens, regardless of political party, willing to allow illegal aliens and the oligarchy to oust you as the rightful “government for the people, by the people and of the people?”