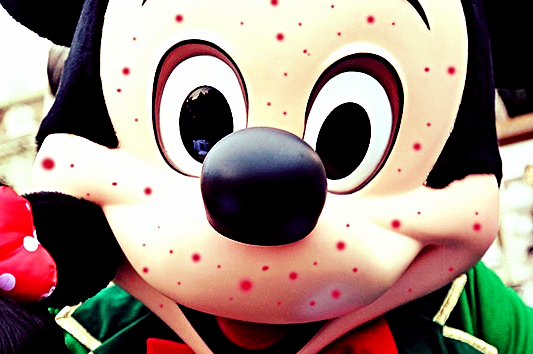 “Lacking any real science proving we have a serious 2015 measles outbreak, and lacking any science supporting the idea that the measles vaccine is safe and effective, we’re looking at a psyop called The Disney Story. A fake horror movie happening at ‘the happiest place on Earth,’ Disneyland. It’s a perfect way to scare the moms into vaccinating their kiddies. If the happiest place on Earth isn’t safe, then where is safety? ‘Mickey Mouse infects children.’ Cue the ominous music. ‘Cotton candy dream turns into nightmare.’ ‘Send in the clowns, carriers of the virus.’” (The Underground, Jon Rappoport)

Dangerous outbreak? Are you kidding?

Mainstream media recalling past problems with the measles vaccine? Are you kidding? The news brushes off what happened 24 hours ago.

Medical scholars and historians are no better. Most of them operate on behalf of entrenched money; and that money wants the population to believe all vaccines are remarkably safe and effective.

What follows are several past statements and reports about the measles vaccine and measles. In a half-sane society that tried to live up to its laws, these statements would spark deep investigations. But we have a different kind of society…

“In 1977, 34 new cases of measles were reported on the campus of UCLA, in a population that was supposedly 91% immune [via vaccination], according to careful serological testing. Another 20 cases of measles were reported in the Pecos, New Mexico, area within a period of a few months in 1981, and 75% of them had been fully immunized, some of them quite recently. A survey of sixth-graders in a well-immunized urban community revealed that about 15% of this age group are still susceptible to rubella [German measles], a figure essentially identical with that of the pre-vaccine era.” (Richard Moskowitz, MD, The Case Against Immunizations, 1983, American Institute of Homeopathy.)

“The combined death rate from scarlet fever, diphtheria, whooping cough and measles among children up to fifteen shows that nearly 90 percent of the total decline in mortality between 1860 and 1965 had occurred before the introduction of antibiotics and widespread immunization. In part, this recession may be attributed to improved housing and to a decrease in the virulence of micro-organisms, but by far the most important factor was a higher host-resistance due to better nutrition.” Ivan Illich, Medical Nemesis, Bantam Books, 1977

“By the (U.S.) government’s own admission, there has been a 41% failure rate in persons who were previously vaccinated against the (measles) virus.” (Dr. Anthony Morris, John Chriss, BG Young, ‘Occurrence of Measles in Previously Vaccinated Individuals,’ 1979; presented at a meeting of the American Society for Microbiology at Fort Detrick, Maryland, April 27, 1979.)

“Prior to the time doctors began giving rubella (measles) vaccinations, an estimated 85% of adults were naturally immune to the disease (for life). Because of immunization, the vast majority of women never acquire natural immunity (or lifetime protection).” (Dr. Robert Mendelsohn, Let’s Live, December 1983, as quoted by Carolyn Reuben in LA WEEKLY, June 28, 1985.)

“Administration of KMV (killed measles vaccine) apparently set in motion an aberrant immunologic response that not only failed to protect children against natural measles, but resulted in heightened susceptibility.” JAMA Aug. 22, 1980, vol. 244, p. 804, Vincent Fulginiti and Ray Helfer. The authors indicate that such falsely protected children can come down with “an often severe, atypical form of measles. Atypical measles is characterized by fever, headache… and a diverse rash (which)… may consist of a mixture of macules, papules, vesicles, and pustules… ”

This last statement is particularly troubling. It suggests that vaccination can increase the likelihood of catching measles; and when that does happen, the illness is far more serious than the ordinary type.

So-called medical experts and PR front men for vaccines are banking on an ignorant population composed of compliant androids.

Mainstream media aren’t the only culprits. Find one course in one college or medical school in America titled: “Vaccines Pro and Con, the Full Story.” You can’t? The very idea of such a course is ludicrous? That’s no accident.