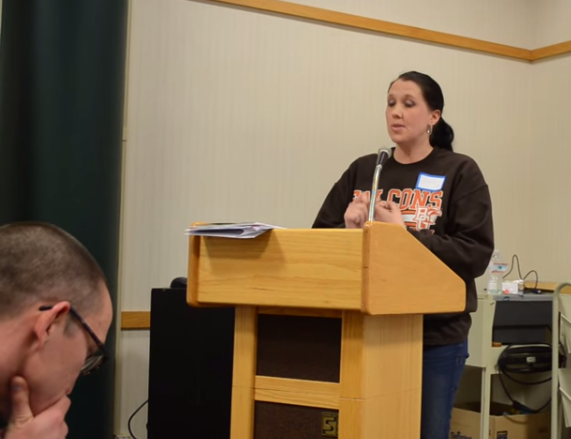 An award-winning, nationally recognized teacher gave a “mic-dropping” speech that ended with the announcement of her teaching resignation from Elyria, OH public schools.

Stacie Starr was not just any teacher, however. She was the number one finalist in 2014’s “Live with Kelly and Michael” ‘Top Teacher’ award, a people’s choice and enviable contest of sorts. It’s like the “American Idol” for teacher contestants, and it drove her into the national limelight. This prompted many news segments to ask her how it felt to win that kind of recognition. In multiple pieces you can see her getting tearfully choked up at the honor, and calling it one of the greatest days of her entire life. Furthermore, she did not simply download information into her learning-disabled, at-risk students – she taught them how to think. That is why she was recognized!

That was near the end of the 2013-2014 school year, so for her to announce her resignation the following year, nowhere near retirement age, is astonishing and enough to make the greater majority of people to say, “what gives?” In the speech below, she will tell you exactly what gives.

But more than that, this speech is utterly heart wrenching because it erupts in tears of another kind.

Earlier this month, Starr was merely to provide information at a Lorain County Education Forum about PARCC testing as it relates to special education students. PARCC is the Partnership for Assessment of Readiness for College and Careers, a coalition of states that is using the test to drive Common Core by assessing students (and teachers) to see how “up to par” they are on the new, fast-paced and nonsensical programming.

What is even more insidious, is that special needs students have been left out of the mix to fall by the wayside. By that I mean, while they are normally allowed to have helps for their disability (like having the test read aloud), they are not allowed any such thing with PARCC. Which means that PARCC is acting outside and above the law with a “survival of the fittest” standard. Starr demonstrates the irony of all the children becoming “left behind” in this new system.

Hear the disturbing account of Robert Oppenheimer, the Manhattan Project, A-Bomb, and Truman’s decision to bomb questions being used for 9th grade reading! She also shows how PARCC and Common Core will contribute to the school-to-prison pipeline. She explains what happens when you ask a modern student a question – “they can. not. think. for themselves.”

From IJR Review (my emphasis added):

The Chronicle-Telegram report, which comes via PJ Media:

Gasps of disbelief followed the announcement made during an education forum aimed at unraveling for parents the intricacies of the standardized testing system. Starr was at the podium, delivering a talk on how special education students are suffering under the new system based on Common Core standards and more rigorous assessments. She said as a veteran intervention specialist at Elyria High School, she could no longer watch silently from within the confines of a structured school day.

Starr spoke of her reasons for leaving teaching, saying:

“I can’t do it anymore, not in this ‘drill ‘em and kill ‘em’ atmosphere,” adding, “I don’t think anyone understands that in this environment if your child cannot quickly grasp material, study like a robot and pass all of these tests, they will not survive.”

Starr was not alone, though. At the public event where she announced her intention to resign at the end of the school year, other teachers from Elyria High School voiced their skepticism about new teaching standards and the contemplations of resigning.

PARCC is another insidious privatized thread, intertwined with Common Core instillation and is worthy of its own articles. This writer encourages the reader to seek research on it, starting with teaching blogs and even mainstream rants written by teachers. You might even bring it up to your local teachers – and be prepared for an earful!