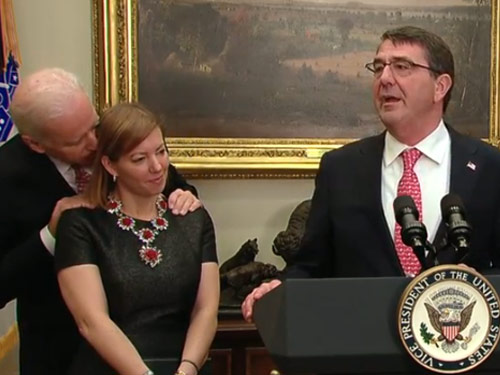 A picture, they say, is worth a thousand words. In this case, a bunch of those words are “ew” and “gross.”

That is a picture of Vice President Joe Biden with his hands on Ashton Carter’s wife’s shoulders, leaned in all close and whispering something in her ear at our new defense secretary’s swearing-in ceremony.

When my mom saw it, she went, “She’s probably wondering how long this hell will last.”

Again, this is our Vice President, America.

You know it’s bad when media outlets in other countries are pointing out how “touchy-feely” one of your nation’s leaders is at an official government function.

I mean, does the guy even realize he’s in public?

But I guess the message here is that because he’s in a position of power, he can do whatever he wants to whoever he wants and get away with it… just like Caligula in the days of Rome.

And by the way, if our so-called defense secretary can’t even defend his wife from pervy uncle Joe over there, why should anyone have faith in him to defend our nation?

(That last question was rhetorical.)