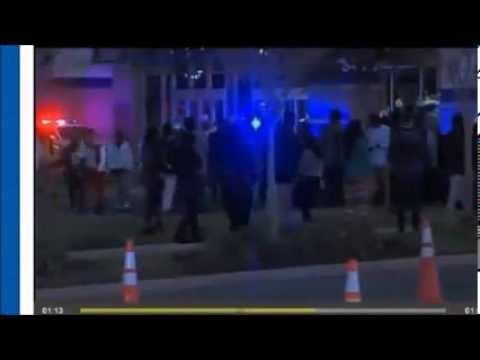 In something akin to a flash mob, some 900 middle school and high school-aged teens reportedly stormed an AMC Theater at West Oaks Mall in Ocoee, Florida Valentine’s Day evening.

Some 200 were able to get in before the security gates were brought down. Afterwards, mass fighting broke out in the parking lot, and moviegoers trapped inside hid under their seats and dialed 9-1-1, unsure what was going on or how to get out.

While initially there were reports of shots fired during the mob, it later turned out to be firecrackers according to Ocoee police. Two teens were arrested at the scene; one for drug paraphernalia and another was tazed and arrested for battery and resisting arrest after pushing a mall employee. What is believed to be a non-related armed burglary occurred nearby.

“(It’s) a big concern to us that are juveniles are doing this at such an early age,” Orange County Sheriff’s Office Lt. Paul Hopkins told WKMG Local 6 Orlando.

The teens weren’t there to riot and trash the theater according to witnesses at the theater, they were reportedly there to see a movie for free by taking advantage of the fact that their large numbers could overwhelm the small amount of theater and mall security staff.

If you’ll recall back in December 2013, approximately 600 teens did almost the exact same thing at a Jacksonville, Florida movie theater for the seemingly the same reason.

Investigations of whether this was planned on social media as many flash mobs have been in the past are ongoing.

Robert Richardson talks about what to do if you find yourself in this situation on his website Offgrid Survival:

This is one of the threats I talk about in The Ultimate Situational Survival Guide: Self-Reliance Strategies for a Dangerous World. These types of events are becoming increasingly common, and when they happen they can overtake an area in a matter of seconds. You usually don’t have a lot of time to respond, so you need to be alert and have a plan in place.

Stay aware of your surroundings at all times.  If you get the slightest feeling that something may be wrong, you need to listen to your instincts and get the hell out.

Keep an eye on the crowd. If you notice an abnormal increase in the number of people in your area, this could be the first sign that something isn’t right. Immediately scan the area, look for exits, and try to get a feel for what type of people are walking around.

Beat them at their own game. Although these riots often seem to pop up out of nowhere, they are often heavily promoted or talked about on sites like Twitter and Facebook. You don’t get 900 thugs showing up at the same time by chance. If you plan on going to a mall, a theater, or any public venue that may be targeted by these thugs, jump on Twitter and type in the name of your destination. It only takes a couple of seconds of your time, but those couple of seconds can warn you to any impending dangers.

What to do if it blows up into an all out riot? Have an exit strategy and, if that doesn’t work, go with the flow, according to Richardson. “Think of the mob as a large raging river. The best way to get out of a river is to swim with the current and slowly make your way to the edge. The same thing applies in this situation. The last thing you want to do is to yell, scream, cut through the crowd, or draw any unwanted attention onto yourself. Stay Calm, go with the flow, and work your way to the edge. Then quietly slip away to safety.”