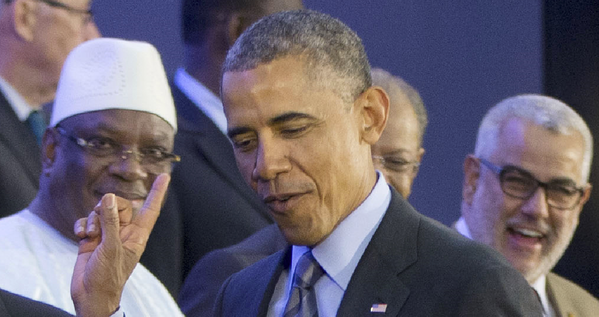 Is President Obama a Muslim?  A lot has been written about this, but if photographs speak louder than words, then a photo taken at last August’s U.S.-African Leaders’ Summit in Washington D.C. might shed considerable light.

Barack Hussein Obama flashes the Muslim shahada to delegates of the US-African Leaders Conference in Washington DC in August 2014.

The Associated Press took this astonishing photo as the African dignitaries joined Obama, who hosted the event, in a State Department auditorium for a group photograph.  It was published in an article in Britain’s Daily Mail, and it was the only use ever of the photo.

The one-finger display is the distinctive Muslim gang sign: The index finger points straight up while the thumb wraps underneath and presses against the digital phalange of the middle finger.  The remaining fingers are squeezed against the palm in order to highlight the extended forefinger.  The extended finger is symbolic of the one-God concept of Muhammad and is understood by all believers to be a symbolic shahada, the Muslim affirmation of faith: There is but one God and Muhammad is his messenger.

Thus when believers stick their index finger in the air, they demonstrate they are partisans of Muhammad’s God concept.  And they also affirm their belief in Muhammad’s claim he was the interface between God and man. They also demonstrate they are part of the umma, the exclusive transtribal supertribe of believers that Muhammad started 1,400 years ago.

With his forefinger in the air, Obama affirmed his membership in this tribe.

ISIS fighter displays the gang sign. To Muslims, the extended forefinger is symbolic of the fundamental belief of Islam: There is but one God and Muhammad is his messenger.

The Daily Mail editors did not understand what they were looking at.  They captioned it “finger wagging” by Obama.  But the African dignitaries understood, and a range of reactions can be detected among the ones who observed the gesture: amusement, surprise, curiosity, disapproval, contempt.  Note the reactions of Abdelilah Berkirane, the prime minister of Morroco pictured just behind Obama’s left shoulder, and Ibrahim Boubacas Keita, the president of Mali in white garb and hat. They are Muslims through and through, and they are all smiles. They knew what Obama’s upright forefinger meant.

The reaction of Togo president Faure Gnassingbe, at the top row second to the left, is less approving.  Through his face you can read the mind of this Sorbonne- and George Washington University educated leader. His mind is screaming, “You gotta be kidding!”

Gnassingbe’s country is squeezed between Benin and the Ivory Coast and is not far from Nigeria and its Boko Haram plague — perhaps a two-hour flight in a slow Cessna from Togo’s capital to the Nigerian capital, less than an hour in something faster.  At the time of the Washington conference, Boko Haram’s leader Abubakar Shekau had just declared Borno State in northeastern Nigeria as the seat of his caliphate.  Massacres of entire villages were taking place; only a few months earlier nearly three hundred girls were abducted from a Borno secondary school.

Togo has seven million people, 50 percent animists, 30 percent Christian.  The remainder are Muslims, part of the umma. Gnassingbe and all other non-Muslims of Togo have reason to worry about radicalization of some of these members of the transtribal supertribe of Muhammad who reside among them. And so his look of disdain. “You gotta be kidding.”

Maybe it was Obama’s idea of a joke, but that is unlikely.  The finger in the air was a position statement brazenly stated.  His entire administration has been a promotion of Islam at home and abroad, and just cataloging the evidence would fill a book.  He has made this country cozy for Islam, from ordering NASA to make Muslims feel good about themselves to calling ISIS beheading victim Peter Kassig by the Muslim name that he had adopted in the vain hope of saving his life.

If only Obama’s coziness were limited to such gestures, but from the very beginning of his administration, he labored to topple the strongman governments that had kept a lid on Islamic extremism:  Tunisia, Egypt, Libya, Yemen.  Overthrowing the Syrian government was also part the program, not yet achieved but still possible. The methodology of each was a tactic from old-school radicalism: stir up domestic trouble that triggers a crackdown, then use the reaction to discredit the government and as a pretext for stirring up greater cycles of trouble until the targeted regime is replaced.

Obama is comfortable with Islam’s extreme.  He arms such people throughout the Middle East.  He has let them into our government.  He supported the Muslim Brotherhood’s Muhammad Morsi as the replacement for Hosni Mubarak, a staunch US ally and enemy of the Muslim Brotherhood, and threatened and bullied Egypt when a massive revolt replaced Morsi with a religious moderate.

The thread of all of these efforts was the reestablishment of the Islamic caliphate, the line of successors of Muhammad that ended nearly a century ago with the collapse of the Ottoman Empire.  This has always been a Muslim Brotherhood objective.  In their grandiose plans, the reestablished caliphate would stretch across the Middle East with Jerusalem as its capital.  The glory of Islam resurrected!  These people aspire to world domination, and the caliphate would serve as the base for an ever-expanding war on the world until domination is achieved.  That was always the goal of their role model.  Muhammad ordered his followers to make Islam the only religion — to create a universal umma.  As with Obama, they are just following orders.

The caliphate was resurrected last year, only it is not in the hands of the Muslim Brotherhood — not yet anyway.  However it came about, the caliphate was Obama’s creation, and he has only half-heartedly pushed back against it.  Now he has asked the U.S. Congress for authorization for use of military force against what he created.  What is Obama up to with this? In everything he does, mischief is the purpose.  What mischief does he intend now?

There is nothing in Obama’s head that is American.  He is an antithetical American, a polar opposite of its values that he is routinely undermining.  He is an unabashed member of the transtribal supertribe that Muhammad created 1,400 years ago; he is of the umma, not of America.  His finger in the air at the African Leaders’ Conference is unambiguous evidence.

And it is evidence that you have been had America.  God, have you ever been had.