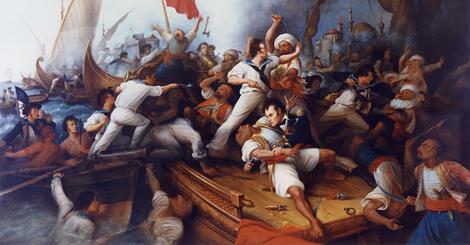 Barack Hussein Obama is not a moron. He is not stupid. He is a stealth jihadist, who entertains our enemies in our White House. He funds them. He trains them. He gives your money to them. Then, he has the audacity to identify Christians as the problem and create a ficticious history of America by claiming, “Here in America, Islam has been woven into the fabric of our country since its founding.” Well, yeah, and the way Islam has been woven into our fabric is through terrorism, and I’m not talking about 9/11. I’m talking about the Barbary Wars.

I wonder how many people have ever even heard of America’s dealings with Islam following her founding. I wonder if they have even considered the words and actions of the third President of the United States, Thomas Jefferson, especially his sense of reading their own texts from the Qur’an and knowing just what his enemies thought. Let’s take a stroll down memory lane and expose Obama’s lies on Islam, shall we?

First, keep in mind that Islam and terrorism have gone hand in hand since its inception at the beginning of the 7th century. In fact, it’s founder Muhammad was a terrorist and used “religion” to band his merry men together to conquer, rape and pillage.

Islam requires jizya under Sharia law, you know that alleged “harmless law” they want to impose here in the West. Jizya is a per capita tax levied on a section of an Islamic state’s non-Muslim citizens, who meet certain criteria. The tax is and was to be levied on able-bodied adult males of military age and affording power. So as Adams and Jefferson met, they found out the price of peace was quite expensive.

If America wanted “temporary peace,” a one-year guarantee, it would cost $66,000 plus a 10% commission. “Everlasting peace” was a bargain at $160,000 plus the obligatory commission. This only applied to Tripoli. Other Muslim nations would also have to be paid. The amount came to $1.3 million. But there was no assurance that the treaties would be honored. In vain, Jefferson and Adams tried to argue that America was not at war with Tripoli. In what way had the U.S provoked the Muslims, they asked? Ambassador Abdrahaman went on to explain “the finer points of Islamic jihad” to the Koranically challenged Jefferson and Adams.

Jefferson then wrote a letter to John Jay that read:

“The Ambassador answered us that it was founded on the Laws of their Prophet, that it was written in their Koran, that all nations who should not have acknowledged their authority were sinners, that it was their right and duty to make war upon them wherever they could be found, and to make slaves of all they could take as Prisoners, and that every Musselman [Muslim] who should be slain in battle was sure to go to Paradise.”

This is loosely based upon the Qur’an’s teaching from Surah 47:4 which reads,

“Therefore, when ye meet the Unbelievers (in fight), smite at their necks; At length, when ye have thoroughly subdued them, bind a bond firmly (on them): thereafter (is the time for) either generosity or ransom: Until the war lays down its burdens. Thus (are ye commanded): but if it had been Allah’s Will, He could certainly have exacted retribution from them (Himself); but (He lets you fight) in order to test you, some with others. But those who are slain in the Way of Allah,- He will never let their deeds be lost.”

So what happened? Though the US, along with Great Britain and France had paid a “tribute” for protection against piracy, once Tripoli increased the tribute following Jefferson becoming President, he refused to pay them the increase, though he did continue to pay until the end of his presidency. Tripoli then declared war on the United States on May 10, 1801. This was the beginning of the First Barbary War.

Interestingly enough, before becoming President, Jefferson had opposed funds be used for a Navy except to provide coastal defense. Gerard W. Gawalt writes concerning Jefferson and the tribute payment:

After the United States won its independence in the treaty of 1783, it had to protect its own commerce against dangers such as the Barbary pirates. As early as 1784 Congress followed the tradition of the European shipping powers and appropriated $80,000 as tribute to the Barbary states, directing its ministers in Europe, Thomas Jefferson and John Adams, to begin negotiations with them. Trouble began the next year, in July 1785, when Algerians captured two American ships and the dey of Algiers held their crews of twenty-one people for a ransom of nearly $60,000.

Thomas Jefferson, United States minister to France, opposed the payment of tribute, as he later testified in words that have a particular resonance today. In his autobiography Jefferson wrote that in 1785 and 1786 he unsuccessfully “endeavored to form an association of the powers subject to habitual depredation from them. I accordingly prepared, and proposed to their ministers at Paris, for consultation with their governments, articles of a special confederation.” Jefferson argued that “The object of the convention shall be to compel the piratical States to perpetual peace.” Jefferson prepared a detailed plan for the interested states. “Portugal, Naples, the two Sicilies, Venice, Malta, Denmark and Sweden were favorably disposed to such an association,” Jefferson remembered, but there were “apprehensions” that England and France would follow their own paths, “and so it fell through.”

Paying the ransom would only lead to further demands, Jefferson argued in letters to future presidents John Adams, then America’s minister to Great Britain, and James Monroe, then a member of Congress. As Jefferson wrote to Adams in a July 11, 1786, letter, “I acknolege [sic] I very early thought it would be best to effect a peace thro’ the medium of war.” Paying tribute will merely invite more demands, and even if a coalition proves workable, the only solution is a strong navy that can reach the pirates, Jefferson argued in an August 18, 1786, letter to James Monroe: “The states must see the rod; perhaps it must be felt by some one of them. . . . Every national citizen must wish to see an effective instrument of coercion, and should fear to see it on any other element than the water. A naval force can never endanger our liberties, nor occasion bloodshed; a land force would do both.” “From what I learn from the temper of my countrymen and their tenaciousness of their money,” Jefferson added in a December 26, 1786, letter to the president of Yale College, Ezra Stiles, “it will be more easy to raise ships and men to fight these pirates into reason, than money to bribe them.”

With US merchant ships being attacked and Americans being kidnapped he finally issued letters of marque and reprisal, which sent a groups of privately owned war ships, that were approved by the government, to make war against the Barbary Pirates. He utilized this constitutional measure, which we are not using today.

In doing this he sent for the “privateers,” as they were referred to. The privately owned frigates USS Philadelphia, USS President, and the USS Essex, along with the schooner USS Enterprise was America’s first navy to cross the Atlantic. Others would also join and see action as well.

Ultimately, in 1805 United States Marines crossed the desert from Egypt into Tripolitania, forced the surrender of Tripoli and free those Americans that had been kidnapped and were made slaves.

Thus, this is where the famous line from the United States Marine Corps (Oorah!) comes from: “From the halls of Montezuma to the shores of Tripoli.” Demar says it not only refers to the First Barbary War, but specifically to the Battle of Derna, which took place in 1805.

It is ironic the Rep. Keith Ellison, who became the United States’ first Muslim Congressman took his oath of office on Thomas Jefferson’s Qur’an at a time when we continue to be at war with Islam. While Ellison has called Jefferson a “visionary,” what I think we could all learn is that Jefferson was wise enough to read and learn about the enemy from their own book of jihad. Sadly, many today would rather listen to the lies of Islamists rather than understand what the Qur’an actually teaches. After all, it’s been said “Those who cannot remember the past are condemned to repeat it.”

In case you were wondering, here are Obama’s taqiyya comments: