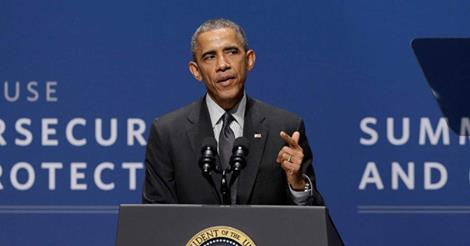 It’s official. In other words, Obama said it, so it must be true – that will be the low information public take on it, anyway. Obama declared on Thursday that Americans, along with Europeans and journalists, are “inviting jihadi violence” by criticizing Islam as well as protesting the immigration of Muslims. Isn’t that like blaming a woman who is raped on the woman or blaming the store owner who is robbed for the robbery?

“We’ve also seen, most recently in Europe, a rise in inexcusable acts of anti-Semitism, or in some cases, anti-Muslim sentiment or anti-immigration sentiment,” Obama told a Feb. 19 audience of U.S. and foreign officials and advocates, who met to discuss ways to minimize jihadi violence.

Peaceful criticism of Islamic culture is bad, he suggested. “When people spew hatred toward others – because of their faith or because they’re immigrants – it feeds into terrorist narratives. … It feeds a cycle of fear and resentment and a sense of injustice upon which extremists prey,” he said.

Maybe Obama should watch this video and then talk about “hatred toward others.”

Obama said, “We have to ensure that our diverse societies truly welcome and respect people of all faiths and backgrounds.”

The man in the Oval Office insisted “the conflict between Muslim and Western cultures is not caused by fundamentally different attitudes about freedom and religious solidarity.” He believes the jihadi violence is cause by “tit-for-tat ‘cycles of conflict,'” along with a lack of dialogue.

One should understand by now that when Obama talks about “dialogue,” it means a one-sided conversation without being able to voice an opposing viewpoint – his is the only viewpoint and you will, one way or another, accept it and adopt it. It is not dialogue that Obama wants at all, but for people to stop telling the truth about the tenets of Islam, its anti-semitic rhetoric, its support for misogyny, pedophilia, genocide, slavery, barbarism, constant war-mongering and culture of hatred. While he wants to silence any truth to be told about Islam, Muslims are free to criticize other religions, spew hatred toward those of other faiths, slander and blaspheme the Lord Our God and His Son, Jesus Christ, and kill the unbelievers in the name of their satanic deity, Allah.

Obama is under the delusion that the Middle Eastern Sunni and Shiite Muslims can end their terror campaign against each other and others by engaging in “dialogue,” and when the “political, civic and religious leaders reject sectarian strife.” Evidently he missed the memo that this has been going on for 1400 years. If in 1400 years dialogue would have stopped it, it would have been stopped by now.

Obama wants America and the governments in Europe to “guide public debate” regarding Muslim culture and proposes to bring together the youth “to promote understanding and cooperation.” He announce a “virtual exchange program,” named after Ambassador Chris Stevens, that will “connect 1 million young people from America and the Middle East and North Africa for dialogue.”

Chills should run up everyone’s spine knowing that some type of virtual exchange program is to be implemented and named after the American ambassador that was killed by Muslims in Benghazi – a murdering spree Obama and his ilk blamed on a YouTube video. It was an attempt to cover for Islam by blaming it on the free speech practiced in America. What a disgraceful act it is for Obama to name this program after an ambassador that he claimed was killed by free speech.

In Germany, tens of thousands have protested, peacefully, their local government’s plan to settle Muslims in their cities. These “PEGIDA” (Patriotic Europeans against the Islamization of the West) protests have expanded to other cities and countries since jihadi attacks have occurred in Belgium, France and Denmark. The peaceful protests have been met with opposition composed of progressives and Muslims.

Germany’s leaders have angrily criticized these peaceful protests. Christiane Wirtz, spokesperson for German Chancellor Angela Merkel, stated, “There is no place for Islamophobia, anti-Semitism or any form of xenophobia or racism.” Spokesperson for the German Prime Minister basically echoed these sentiments in December saying, “In the name of the government and the chancellor I can say quite clearly that there is no place in Germany for religious hatred, no matter which religion people belong to.”

If that’s the case in Germany, why is it that Muslims are allowed to criticize Christianity, engage in anti-Semitism against Jews, attack innocent passers by who are not following “their religion,” attack and kill those engaging in freedom of the press, speech and assembly with impunity? It could be because western governments have elevated Islam to have preference over all other religions – sort of an “establishment of religion” without actually making official law.

And, it’s not just Germany. Why are governments trying to eradicate individual God-given rights of their citizens while allowing Muslims to engage in crimes without so much as a peep of opposition? Why are governments trying to cater to Muslims instead of requiring Muslims to assimilate to the country’s laws and culture as is the case with other immigrants?

Islam is at odds with freedom. It endorses polygamy, anti-Semitism, genocide, pedophilia, hostility to free speech, inequality in regards to women and non-Muslims, and is against free enterprise. What is taught in Islam straight out of the Qu’ran and Hadiths goes against the established culture of Western civilization and is totally at odds with Christianity and Judeo-Christian values.

While this is the truth regarding Islam, Obama has “urged,” more than likely coerced or blackmailed, Western media to begin producing videos and articles that are pro-Muslim, despite the attacks and crimes committed by Muslim immigrants.

Obama closed his deceitful speech with “speaking very directly to a painful truth.”

“In some of our countries, including the United States, Muslim communities are still small, relative to the entire population, and as a result, many people in our countries don’t always know personally of somebody who is Muslim.

“So the image they get of Muslims or Islam is in the news … that can give a very distorted impression.

“Not enough of the good – the more than 1 billion people around the world who do represent Islam, and are doctors, and lawyers and teachers, and neighbors and friends. So we have to remember these Muslim men and women.”

He went on to give examples: the Muslim police officer in Paris who died trying to stop the Islamic killers at Charlie Hebdo; the Muslim who hid Jewish customers at the kosher supermarket in Paris from Islamic killers, then went on to save their lives; the Palestinian working with Israelis to build trust and understanding while giving voice to her people’s aspirations; and, the Muslim cleric working with Christian priests and pastors in Nigeria and the Central African Republic to stop the hatred cycle.

Blah, Blah, Blah. That is about all I can hear when this man speaks. Obama forgets the doctrine of taqiyyah, which allows those who practice Islam to lie to non-believers. We all know that what Obama considers “truth” may not be the truth at all but “the truth according to the puppet Obama.”

The problem Obama has is there are many in America and around the world that are not buying the “whitewashing of Islam” by him or their own governments, which is now leading to the “doubling down” of efforts to silence those who speak the truth and know the truth about Islam. People of the world and America have heard the clerics of Islam, the religious leaders, proclaim the truth about Islam, heard the fatwas issued, and the urgings of Muslims to engage in jihad, anti-Semitism, murder, and sedition. Many more have educated themselves by reading the vile text that is the Qu’ran and reading the teachings of Mohammed in the Hadiths.

A few individuals have worked tirelessly to educate the public truthfully about Islam – an endeavor that has resulted in these individuals receiving vicious hate mail, death threats and even being barred from entering foreign countries. For Obama and his henchmen to increase their efforts to silence opposition to Islam, one could say that those who are committed to telling the truth about Islam are having an impact. It’s an impact that vexes the Muslim Obama and his Muslim Brotherhood buddies.

Regardless of what Obama or any foreign government wants, the unalienable right to freedom of speech exists…period. The truth regarding Islam will continue to be voiced, whether Obama, his ilk, his supporters, Congress, or the practitioners of Islam like it or not. There will be no playing of the game, “Obama says.”