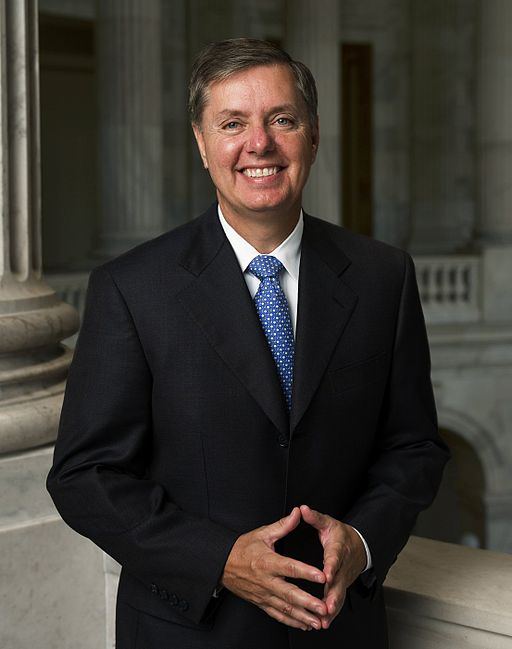 South Carolina Senator Lindsey Graham (R) is now testing the waters for a possible 2016 run for the White House. I’m sure some are still blinded to his corruption to the point where they would vote for him. I’m not one of them. However, over the weekend, Senator Graham used double speak to defend Barack Obama from comments made by former mayor of New York Rudy Giuliani that Obama hates America.

“Well, I love Rudy, but I don’t want to go there. The nation’s very divided. President Obama has divided us more than he’s brought us together and I don’t want to add to that division,” Graham said on ABC’s “This Week.” “I have no doubt that he loves his country. I have no doubt that he’s a patriot. But his primary job as president of the United States is to defend this country and he’s failing miserably.”

OK, let’s think about this a moment, shall we? Graham says, “The nation’s divided.” He then follows it up with who is dividing it, “Obama has divided us more than he’s brought us together.”

Does that sound like love for one’s country or the other way around?

Next, Graham claims that Obama’s primary job is to defend the country. However, he then says, “He’s failing miserably.”

Could someone get Lindsey Graham a dictionary concerning the terms “love” and “patriot”? How can the man love his country yet divide it more than bring it together? How can a man be a patriot with the responsibility of defending the country yet be failing miserably?

Graham went on to say that part of Obama’s failure to defend the country lies in his unwillingness to identify Islamists as Islamic. While Graham likes the term like most in the media of “radical” Islamists, we all are, or should be, aware that those referred to as “radicals” by politicians and media are the real deal Islamists. Those not adhering to the teaching of the Koran are not moderates. They are hypocrites, according to the Koran.

“They’ve adopted a theory of religion that’s 1,000 years old that requires a worldwide caliphate that will purify the Islamic religion, kill or convert every Christian and Jew and vegetarian in their way,” Graham said. “They’re not going to stop unless somebody stops them.”

“I’ve never been more worried about my country than I am today in terms of radical Islam, and yes, it is radical Islam,” he said.

No Senator Graham, it is not. It’s Islam, period. Break out the texts of the Koran, study the life of Muhammad and you will find that these devils are following in his footsteps.

Homeland Security Secretary Jeh Johnson, also appearing on “This Week” rejected Graham, though he did so in classic taqiyyah style.

“In my view, if we start referring to ISIL (Islamic State, which was formerly known as the Islamic State of Iraq and SYRIA) as occupying any form of the Islamic theology, we’re pretty much dignifying them as occupying some form of that faith,” Johnson said. “They don’t. Islam is about peace and brotherhood. There are 1.6 billion Muslims in this world and the true Islamic faith has nothing to do with what ISIL represents, and so, to start labeling them as Islam or Islamic State in any respect I think gives them far more dignity than they deserve.”

Graham then wants more boots on the ground in Syria and Iraq. Apparently, this is to fight the very people that he and ‘songbird’ John McCain helped Obama fund, train, and arm.

Graham also thinks a possible presidential bid would allow him to “create a pathway forward to straighten out the mess we’re in and we’ll see where that goes.”

With all due respect to Senator Graham, he has been part of the problem in all of this. He voted for continuing resolutions and a budget that fully funded unconstitutional spending such as Obamacare. He has supported arming and funding jihadists in Syria (Islamic State). He has supported the indefinite detention of Americans that he would label “enemy combatants” and violate their right to trial based on “inside information.” Don’t get me wrong, I’m all for addressing Islamists in America, even US citizens who are Muslim if they are engaging in activities against the US, but there is a proper way to deal with them. His support of NDAA has led to the detaining of American patriots, such as Marine Brandon Raub, by this administration. This is what he doesn’t get… or maybe he does. He also opposed Rand Paul’s filibuster concerning drones being used to assassinate American citizens as he opposed the nomination of Muslim convert John Brennan as head of the Central Intelligence Agency.

After voting to use US taxpayer money to arm and train jihadists in Syria, Graham said, “To my colleagues who worry about the people we trained with the arms falling into wrong hands, I would say there’s nothing we can do in this area without some risk.”

Graham is a willing participant in what is taking place in the Middle East right now. He didn’t risk anything. He knew these people were Islamists and he took our money and armed and trained them anyway. Now, he wants to complain? Now, he wants people to support him for president? Seriously?

Well, I’ve got a better idea. I’ll be showing up at his office (one of seven that he has that are funded with our tax dollars) this Saturday (February 28) at 2pm for round two in the AmericaAgain! Good Guys challenge. Check out last month’s round one here. I wish Senator Graham would not only repent before a just and holy God, but also that he would stop engaging in reckless behavior and treasonous actions such as arming our enemies. However, I will call him out on that. After all, he wanted to run for the office. He asked for the people’s vote. He took the oath. No one forced him into anything, and he has demonstrated that he is unworthy to continue as the representative of the people of South Carolina in the United States Senate.

If you would like to join me, feel free to click on the contact button at the top of the page and send me a message. We will meet at Senator Graham’s office located at 235 East Main Street, Suite 100, Rock Hill, SC 29730 at 2pm EST. This will be a non-violent event (if that is what you may have in mind, please stay home) in which we will lay out an “intent to repossess” the offices of Senator Graham via the AmericaAgain indictment engine according to state law. I would welcome anyone and everyone who desires to participate to meet and stand with me.