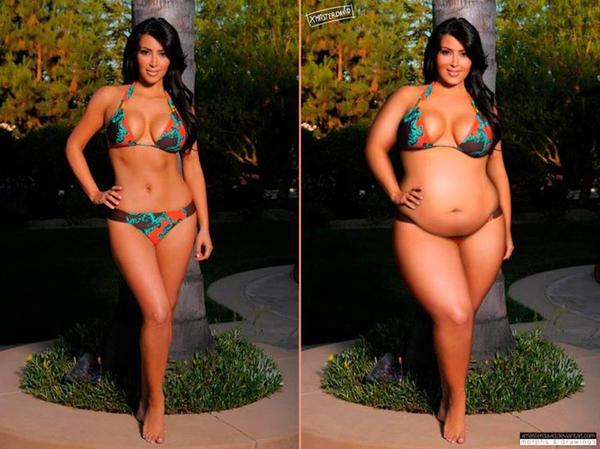 In the cloud cuckoo land of third wave feminism, coronary heart disease is sexy, while thin fertile women are offensive. And if you don’t believe that’s true, you’re a victim of brainwashing by the misogynistic “beauty industry”.

20-year-old Spanish artist David Lopera, who is in a relationship with an overweight woman, created a series of photoshopped images of celebrities to make them look fat.

Lopera’s goal is to “change people’s mind about beauty standards.”

That’s right, because according to feminists – men being attracted to young, thin, fertile, attractive women is a conspiracy foisted upon us by the beauty-cosmetic-fashion industrial complex!

This warped belief has served as the launch pad for the “body positivity movement,” a bizarre branch of third wave feminism which asserts that obesity should be celebrated as some kind of new civil rights crusade. In embracing ‘fat pride’, feminists are promoting a lifestyle that is incredibly harmful to women.

Under this dogma, anyone who points out the myriad of dire health threats linked to obesity is guilty of “fat shaming” and maybe even hate crime. Women who encourage exercise and healthy lifestyles are also being publicly hounded and shamed by fat acceptance activists.

The fat pride movement asserts that society should be drastically changed to meet their needs – doors widened, seats made bigger – not that they should be encouraged to change their lifestyles, despite the fact that obesity costs national economies many multiple times the cost incurred by smoking-related diseases.

Evolutionary biology tells us that men are attracted to healthy and fertile women with small waist to hip ratios. The smaller the waist in relation to the hips, the more attractive a woman is to a man. This is a scientific, empirically observed fact, and has nothing whatsoever to do with “beauty standards” promoted by culture or the fashion industry, but feminists have never allowed demonstrably provable facts and logic to get in the way of their argument, so why start now?

Meanwhile, a commercial for “the world’s slimmest cellphone” which features an attractive, slender woman has been banned in the United Kingdom because eight people complained, claiming it was “overtly sexual and objectified women”.

So according to our new world of politically correct lunacy, showing obese and unhealthy women in bikinis is empowering and trendy, but portraying healthy, slim, attractive women in their underwear is an abhorrent, sexist crime against the female gender.

Watch the video below to learn more about how the ‘fat pride movement’ has become the newest and perhaps most demented branch of third wave feminism, and why it represents yet another authoritarian threat to free speech.