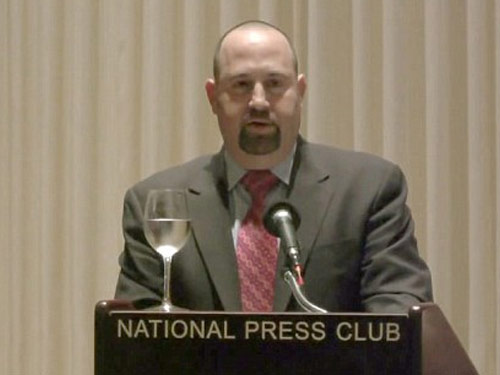 The third U.S. government official in recent years has been arrested for sexual crimes against children.

This time it’s a guy with the State Department. Daniel Rosen, who oversaw hundreds of millions of dollars in counterterrorism program funding, is all over the news today, charged with one count of ‘use of a communications device to solicit a juvenile’.

A U.S. State Department official was jailed Tuesday on a charge of soliciting a minor.

Daniel Rosen was arrested at his home in Washington, D.C., about noon on Tuesday and was in custody at the D.C. jail Tuesday night, said Fairfax County, Virginia, Police Department spokeswoman Lucy Caldwell.

The worst part isn’t Rosen’s alleged crime or what else he might have been involved in that has not yet been uncovered. The worst part is that this is just the latest U.S. government official arrested for these types of crimes against kids:

In December 2013, Jesse Ryan Loskarn, the chief of staff to Republican Sen. Lamar Alexander, was arrested on charges of possessing and distributing child pornography. Loskarn, a young rising star on Capitol Hill, hanged himself the next month.

In August 2014, George Hristovski, an inspector at the Homeland Security Department, was arrested in California for attempting to produce child pornography and the attempted enticement of a minor. According to law enforcement officials, Hristovski posted an online advertisement on Craigslist looking for a mother who was willing to introduce him to her daughter so Hristovski could have sex with her. He was arrested after asking for pornographic images of a 13-year-old girl that he thought he was communicating with and attempting to meet her for sex. (source)

It begs the question: What other disgusting corruption will be uncovered in the highest ranks of America’s government?

How many more of these termites are going to come out of the woodwork in the coming months leading to the next election?