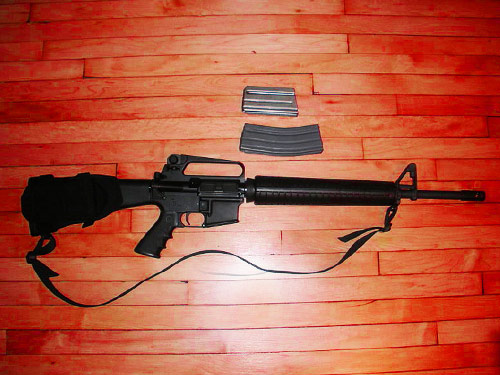 “The Obama administration was unable to ban America’s most popular sporting rifle through the legislative process, so now it’s trying to ban commonly owned and used ammunition through regulation.”

Chris Cox, executive director of the NRA’s Institute for Legislative Action, has hit the nail on the head.

Following the Sandy Hook shooting, the Obama administration tried to ban several kinds of firearms, including the AR-15.

Now it seems that he may have actually found a way to do it, albeit slowly. He isn’t going to outright ban the gun itself; the Bureau of Alcohol, Tobacco, Firearms and Explosives (BATFE) is just going to ban the most commonly sold bullets for the gun instead.

At issue is so-called “armor-piercing” ammunition, an exemption for those bullets mostly used for sport by AR-15 owners, and the recent popularity of pistol-style ARs that use the ammo.

The inexpensive 5.56 M885 ammo, commonly called green tips, have been exempt for years, as have higher-caliber ammunition that also easily pierces the type of soft armor worn by police, because it’s mostly used by target shooters, not criminals. The agency proposes to reclassify it as armor-piercing and not exempt. [emphasis added]

The BATFE released a proposal this month which would ban 5.56 mm ammo period. Here’s a snippet:

Applying the sporting purposes framework set forth above, the 5.56 mm projectile that ATF exempted in 1986 does not qualify for an exemption because that projectile when loaded in to SS109 and M855 cartridges may be used in a handgun other than a single shot handgun. Specifically, 5.56 mm projectiles loaded in to the SS109 and M855 cartridges are commonly used in both “AR-type” rifles and “AR-type” handguns. The AR platform is the semi-automatic version of the M16 machine gun originally designed for and used by the military. The AR-based handguns and rifles utilize the same magazines and share identical receivers. These AR-type handguns were not commercially available when the armor piercing ammunition exemption was granted in 1986. To ensure consistency, upon final implementation of the sporting purpose framework outlined above, ATF must withdraw the exemptions for 5.56 mm “green tip” ammunition, including both the SS109 and M855 cartridges.

So you can still legally own it if you already have it… but no one can import it, sell it, or even produce it.

Not only that, but the ban has been put on fast track.

The issue, according to BATFE, is the ability to shoot through the soft body armor worn by most police officers, but even some former officers have noted that the AR-15 isn’t the common gun of choice used by criminals to harm police.

Here’s where it gets into a semantics game, via Forbes:

Now, to be as nitpicky as the law, the M855 ball ammunition the ATF wants to ban as “armor piercing” doesn’t have a core made of the metals listed in what legally makes a bullet “armor piercing.” The M855 actually has a lead core with a steel tip. Also, the M855 is traditionally a rifle cartridge and the ban only covers handgun ammunition. The DOJ argues this doesn’t stop them because the law stipulates they can ban a bullet that “may be used in a handgun.” And, after all, any cartridge may be used in a handgun.

Still, the definition has another condition. According to law, when ammo is made for “sporting purposes” (hunting, recreation shooting and so on) it is exempt from this ban. According to the DOJ the “GCA exempts ammunition that would otherwise be considered armor piercing if the Attorney General determines that the specific ammunition at issue is ‘primarily intended to be used for sporting purposes.’” So, according to the DOJ, they simply get to decide on this condition.

The NRA has promised to fight this and has released a statement which reads in part:

As NRA has been reporting since the night the news broke, the Bureau of Alcohol, Tobacco, Firearms and Explosives (BATFE) is moving to infringe upon the rights of law-abiding gun owners with a drastic reinterpretation of a nearly 30-year-old law regulating so-called “armor piercing” ammunition. So draconian is BATFE’s new “Framework” that it would prohibit the manufacturing, importation, and sale of M855 ball ammunition, one of the most popular cartridges for the most popular rifle in America, the AR-15. Not coincidentally, the AR-15 is among the firearms the Obama Administration has unsuccessfully sought to outlaw. If they can’t ban the pie, so the thinking apparently goes, they might at least get the apples. [emphasis added]

In an effort to thwart BATFE’s attempted action, NRA has worked with U.S. Representative Bob Goodlatte (R-Va.), Chairman of the House Judiciary Committee, to draft a letter to BATFE expressing the lawmakers’ opposition to the proposed Framework. To read a copy of the letter, please click this link.

According to the letter, “The idea that Congress intended [the ‘armor piercing’ ammunition law] to ban one of the preeminent rifle cartridges in use by Americans for legitimate purposes is preposterous.” It goes on to state that the law “should be construed in accordance with the American tradition of lawful firearms ownership, as protected by the Second Amendment.”

The proposal has already driven up the price of 5.56 mm ammo as it is. Once it’s banned from sale, that’s it… for civilians.

The government will, of course, still be able to purchase these rounds.

See where this is headed?

Well, Eric Holder did lament that his biggest failure was the inability to pass more gun laws after Sandy Hook.

Then again, this is the same man who said we need to brainwash people against guns back in the mid-1990s.

Banning the right to keep and bear arms has been on the federal agenda for years now. It would appear that since the government knows it can’t just outright ban the Second Amendment, they’ll just inch it up incrementally and undermine it into oblivion.

The NRA has put up a webpage for contacting the BATFE, Congress, and the Obama Administration regarding the bullet ban here.