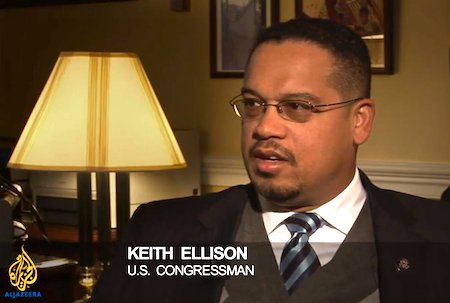 Minnesota Representative Keith Ellison (D-MN) is the only Muslim member of Congress, and he is one of the most acerbic voices in our legislature. Ellison has said some terribly offensive things about conservatives, Christians and Republicans.

But I’m not sure that anything to compare to the ridiculous things he said on Sunday’s episode of This Week on ABC.

Speaking with ABC’s George Stephanopoulos about Mayor Rudy Giuliani’s recent comments about President Obama ‘not loving the USA,’ Rep. Ellison laughed off the notion by making an even more ridiculous statement.

I think that the president’s an amazing patriot and one of the best presidents I think our country will ever have seen.

Okay, I can forgive a Democrat for defending President Obama. I can be fine when they say something that … “stretches” the truth a bit to bolster their party’s credibility. But Rep. Ellison’s little fairytale is a bridge way too far.

Under President Obama’s leadership our economy has remained stagnant. Under President Obama, our standing in the world has collapsed. We’ve gone from pushing the terrorists to the brink of anonymity to seeing the rise of several new, ferocious and terrifying terrorist organizations. We went from being the country that the world was usually mad at to being the country that the entire world finds completely irrelevant.

Obama has been a failure in every appreciable and measurable way. Rep. Ellison is either a complete fool, a pathological liar, or some combination of both.

George Stephanopoulos: They do sound angry, Keith Ellison. But, you know, the point that Marco Rubio was making there, and I guess the point that Scott Walker was trying to make is that there does seem to be a little bit of a double standard here. The Republicans tend to get asked these questions about their outliers more than Democrats are.

Rep. Keith Ellison: Oh, I don’t agree with that. You know, people are always being asked about what somebody else said. But I have to tell you this, the president definitely is a great lover of America. I mean so much so that 11 million Americans got health care who never had it before. That’s pragmatic love of country, when you do things for your countrymen and women.

“So I don’t know. I think that the president’s an amazing patriot and one of the best presidents I think our country will ever have seen.”