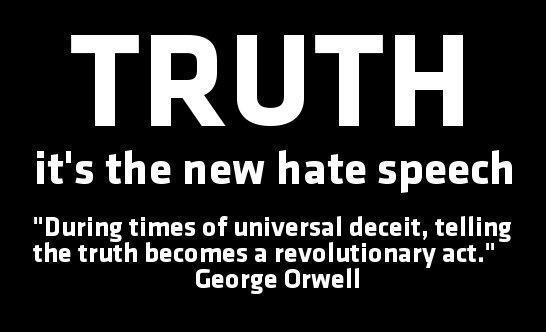 “…if all records told the same tale — then the lie passed into history and became truth.” (1984, George Orwell)

The New Scientist has the stunning story (2/28/15, “Google wants to rank websites based on facts not links,” by Hal Hodson):

“THE internet is stuffed with garbage. Anti-vaccination websites make the front page of Google, and fact-free ‘news’ stories spread like wildfire. Google has devised a fix – rank websites according to their truthfulness.”

The author of the article lets the cat out of the bag right away with his comment about “anti-vaccination” websites.

These sites will obviously be shoved into obscurity by Google because they’re “garbage”…whereas “truthful” pro-vaccine sites will dominate top ranked pages on the search engine.

This is wonderful if you believe what the CDC tells you about vaccine safety and efficacy. The CDC: an agency that opens its doors every day with lies and closes them with more lies.

The New Scientist article continues: “A Google research team is adapting [a] model to measure the trustworthiness of a [website] page, rather than its reputation across the web. Instead of counting incoming links, the [ranking] system – which is not yet live – counts the number of incorrect facts within a page. ‘A source that has few false facts is considered to be trustworthy,’ says the team…The score they compute for each page is its Knowledge-Based Trust score.”

Right. Google, researchers of truth. Assessors of trustworthiness. Who in the world could have a problem with that?

“The [truth-finding] software works by tapping into the Knowledge Vault, the vast store of facts that Google has pulled off the internet. Facts the web unanimously agrees on are considered a reasonable proxy for truth. Web pages that contain contradictory information are bumped down the rankings.”

Right. Uh-huh. So Google, along with its friends at the CIA, will engineer a new and improved, greater flood of (dis)information across the Web. And this disinfo will constitute an overwhelming majority opinion…and will become the standard for measuring truth and trustworthiness.

Think about what kinds of websites will rise like foul cream to the top of Google page rankings:

“All vaccines are marvelously safe and effective, and parents who don’t vaccinate their kids should be prosecuted for felonies.”

“GMOs are perfectly safe. ‘The science’ says so.”

“The FBI has never organized a synthetic terror event and then stung the morons it encouraged.”

“Common Core is the greatest system of education yet devised by humans.”

In other words: (fake) consensus reality becomes reality. Which is the situation we have now, but the titanic pile of fakery will rise much, much higher.

Also, think about this: the whole purpose of authentic investigative reporting is puncturing the consensus…but you’ll have to search Google for a long time to find it.

In the field of medical fraud, an area I’ve been researching for 25 years, the conclusions of standard published studies (which are brimming with lies) will occupy page after page of top Google rankings.

Let me offer a counter-example to the Google “knowledge team.” Here is a woman who has examined, up close and personal, more medical studies in her career than the entire workforce of Google. She is Dr. Marcia Angell. For 20 years, she was an editor at The New England Journal of Medicine.

On January 15, 2009, the New York Review of Books published her stunning statement:

It is simply no longer possible to believe much of the clinical research that is published, or to rely on the judgment of trusted physicians or authoritative medical guidelines. I take no pleasure in this conclusion, which I reached slowly and reluctantly over my two decades as an editor of The New England Journal of Medicine.

In two sentences, Angell carries more weight than 20,000 blowhard “science bloggers,” to say nothing of lying drug companies and that criminal agency called the FDA.

Angell torpedoes an entire range of medical literature, based on her hard-won experience.

But you can be sure that when it comes to “medical facts,” the Google “truth team” will ascribe absolutely no merit (ranking) to her conclusion or its implications.

You may say, “But these search engines are already slanting the truth.”

Stories on the US government funding terrorist groups?

Stories on the hostile planetary intentions of Globalists?

Stories on corporate criminals? Secrets of the Federal Reserve?

Counter-consensus stories on 9/11, the JFK assassination, the US bankers and corporations who funded both sides in WW2? All anti-establishment versions of history?

After Google launches this Ministry of Truth program, you’ll have to put on diving gear and go deep underwater to find any trace of them.

Welcome to a new day.

“It was a bright cold day in April, and the clocks were striking thirteen.” (Opening line, 1984, Orwell)

Let’s take all this one step further. Google’s director of research is Ray Kurzweil, who many people know as the promoter of a “utopian” plan to hook the population up (through direct brain-machine interface) to a vast super-computer.

The super-computer will pass along virtually all human knowledge. Kurzweil believes such a momentous breakthrough will endow humans with a mystical level of consciousness.

Even if this technological wet dream could be realized, we can now see what “connecting to all human knowledge” means:

It means accepting all official knowledge. Being blind to counter-knowledge.

IAs would be humans who are programmed to be androids. IAs accept truth as it delivered to them by official sources.

And hiding other sources.

You will be fed the Good and protected from the Evil.

Thank you, Google. When are you going to apply for non-profit status and open your Holy Church of Information?

“Today’s sermon will be delivered by the director of the CIA. It is titled, ‘Data: everything you need to know, everything you must not believe.’ Breathe deeply. Your neuronal circuits are now being tuned to our channel…”