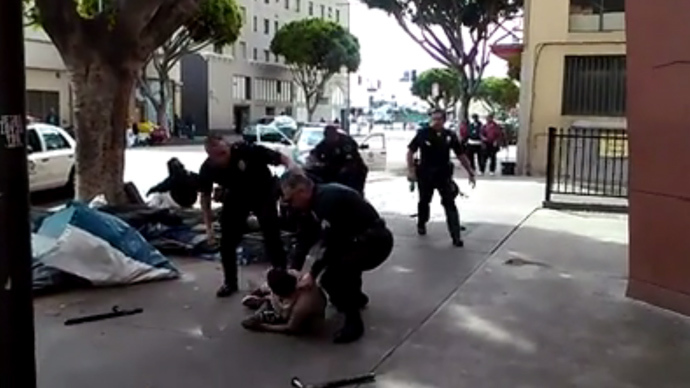 Social justice warriors pounce on incident before facts are in 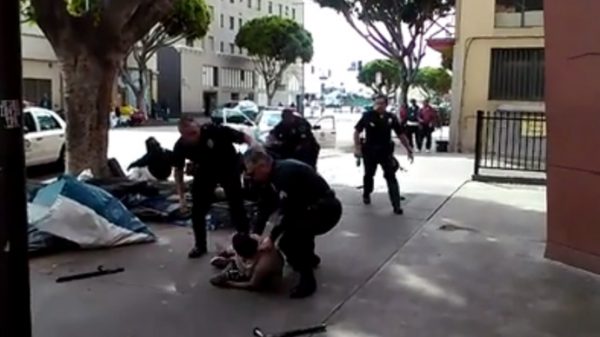 Despite circumstances surrounding the incident remaining unclear, the shooting of a homeless man by LAPD officers yesterday has been seized upon by some as the latest Michael Brown-style social justice campaign.

The victim, known only by his nickname ‘Africa’, was shot and killed on the city’s Skid Row after officers say he tried to grab their weapons. The incident was captured on a low quality video recording.

Witnesses said the man punched and kicked officers as they tried to arrest him, before reaching for one of their firearms.

This appears to be backed up by the audio of the incident, with officers heard to say, “drop the gun” and “he has my gun” before the fatal shots are fired.

However, just as in the Michael Brown case, other eyewitnesses contradicted this account, claiming that the officers merely chose to execute the man because he was struggling.

“He didn’t have no weapon, they just shot him,” Yolanda Young, told KTTV. “They could have just wrestled him down and took him to jail, but they shot him five times.”

“When they couldn’t apprehend him, that’s when they backed up and just started shooting. Pow, pow, pow, pow. There was five of them. They could have apprehended him,” said another witness, Ceola Waddell.

Early facts about the incident suggest that the victim of the shooting was acting violently and that his behavior was a key factor in his death. ‘Africa’ was witnessed to have been fighting with another homeless man before police arrived. Reports that one officer was wearing a body camera during the struggle may be able to clear up whether the man reached for a weapon.

In the case of Michael Brown, it took autopsy and ballistics evidence to prove that Brown did indeed likely reach for Officer Darren Wilson’s gun during the encounter last summer and almost certainly did not have his “hands up” when Wilson fired the fatal shots.

However, before waiting for the dust to settle and the facts to emerge, many of the same people who ignored or twisted the preponderance of evidence in the Michael Brown shooting are back on the scene to spin the same narrative of an unarmed black man being summarily executed by police.

As we repeatedly documented during the height of the ‘Black Lives Matter’ movement late last year, activists seemed intent on highlighting cases which were ambiguous at best or ones where a lethal response by police was clearly justified, such as an incident just before Christmas where Antonio Martin was shot dead by a St. Louis cop after the teen pointed a loaded gun at the officer’s head.

This only served to discredit legitimate opposition to the genuine problem of police brutality. The ‘Black Lives Matter’ movement lost even more credibility when protesters started harassing white people, including children, in restaurants and shopping malls.

We report on innumerable examples of unjustified police brutality almost every single day, yet segments of the racially charged left routinely obsess on incidents where the victims are black people, even though in most cases, such as Michael Brown and Antonio Martin, those killings appear to be justified.

The problem of police brutality will not be resolved by jumping to conclusions just because they fit into the pre-defined narrative which has been pushed by the ‘Black Lives Matter’ movement, especially when such cases eventually prove to discredit that very narrative.