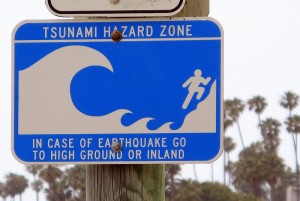 Could you imagine what would happen if a tsunami hundreds of feet high slammed into the east coast of the United States at several hundred miles an hour?  Just because it has never happened during any of our lifetimes does not mean that it can’t happen.  In fact, scientists tell us that there is a very good chance that it will happen someday.  And if it does happen, there is a very good chance that the number of dead Americans could be in the millions.  Even though there are “Tsunami Hazard Zone” signs on Florida beaches to remind us of this potential threat, we have built giant cities right along the edge of the water all along the Atlantic coast.  Today, an astounding 39 percent of all Americans live in counties that directly border a shoreline.  The potential damage that a major east coast tsunami could do would be unimaginable.  Remember, those living along the Indian Ocean never expected a tsunami in 2004, and those living in Japan never imagined what would hit them in 2011.  These things do happen, and it might very well happen to us one day.

If you do not think that this is within the realm of possibility, just consider what the Washington Post has had to say on the matter…

However, while there is no indication it could happen soon (but could), there are scientifically sound reasons for concern that at some point a mega-tsunami could engulf the entire East Coast with a wave almost 200 feet highsweeping everything and everybody up to 20 miles inland. The consequences of such a relatively unlikely but very possible event in loss of life and property are inestimable and beyond the realm of imagination (at least for me).

Yes, there has not been a major tsunami event along the perimeter of the Atlantic Ocean during any of our lifetimes.

But it has happened.

The most widely known Atlantic Ocean tsunami struck Lisbon, Portugal on November 1, 1755 . It was caused by a magnitude 8.6 earthquake beneath the floor of the Atlantic about 100 miles offshore. This earthquake and associated tsunami destroyed most of the city of Lisbon. Waves up to 12 meters high hit the coastlines of Spain and Portugal just minutes after this earthquake. Over nine hours later waves with seven meter runup heights arrived in the Caribbean and caused significant damage. The earthquake and tsunami killed between 60,000 and 100,000 people.

And National Geographic says that there have been 37 verified tsunamis in the Caribbean since 1498.

So these things do happen from time to time.

But why should we be concerned now?

What could possibly cause a mega-tsunami to slam into the east coast today?

Well, according to the Washington Post, there are a couple of scenarios that scientists are focused on…

The first is a submarine landslide at the edge of the continental shelf off the coasts of Virginia and North Carolina where unstable sections of the shelf could collapse into the trenches of the deep ocean. Should that occur scientists believe an 18-foot-high tsunami would propagate towards the coast and strike in a matter of hours.

The second time bomb is a mega-tsunami caused by a massive landslide as a large section of La Palma, one of the Canary Islands in the Eastern Atlantic, collapses into the ocean following a volcanic eruption of the Cumbre Vieja volcano on La Palma. If (when) this occurs, modeling results indicate a wall of water up to 300 feet high would race across the Atlantic and reach the East Coast in about nine hours with devastating effects.

If a 300 foot tall tsunami did “race across the Atlantic” and slam into the United States, the devastation would be beyond anything that any of us have ever seen before.

Regardless of the factors, I felt that you may be curious to see following elevation graphics that I layered together which increment 75 feet all the way to 300 feet in height along the U.S. East Coast. I would guesstimate that if you live within 20 miles of the coast, you may be vulnerable to a Canary Island ‘event’. Fortunately, these don’t happen very often…

There are countless cities in between these coastal cities. The Eastern Seaboard of the United States includes some of the largest metropolitan areas in the country. Over one third of the country (more than 100 million people) live along the East Coast. Evacuation would be virtually impossible for most (except for the astute who act quickly) due to only hours notice, probable doubt, and the subsequent immediate gridlock that would follow.

And since nearly the entire state of Florida is close to (or below) sea level, there would be next to nothing to stop it from sweeping across the entire state.  The following is an excerpt from an article about how incredibly flat Florida is…

South Florida has two big problems. The first is itsremarkably flat topography. Half the area that surrounds Miami is less than five feet above sea level. Its highest natural elevation, a limestone ridge that runs from Palm Beach to just south of the city, averages a scant 12 feet. With just three feet of sea-level rise, more than a third of southern Florida will vanish; at six feet, more than half will be gone; if the seas rise 12 feet, South Florida will be little more than an isolated archipelago surrounded by abandoned buildings and crumbling overpasses. And the waters won’t just come in from the east – because the region is so flat, rising seas will come in nearly as fast from the west too, through the Everglades.

Even worse, South Florida sits above a vast and porous limestone plateau. “Imagine Swiss cheese, and you’ll have a pretty good idea what the rock under southern Florida looks like,” says Glenn Landers, a senior engineer at the U.S. Army Corps of Engineers. This means water moves around easily – it seeps into yards at high tide, bubbles up on golf courses, flows through underground caverns, corrodes building foundations from below. “Conventional sea walls and barriers are not effective here,” says Robert Daoust, an ecologist at ARCADIS, a Dutch firm that specializes in engineering solutions to rising seas.

Personally, I am not that concerned about a potential Canary Island event creating a giant tsunami.

I am much, much more concerned about what would happen if a giant meteor were to hit the Atlantic Ocean.

According to the University of California at Santa Cruz website, if a giant meteor did slam into the Atlantic Ocean, it could potentially produce a gigantic tsunami with a wall of water as high as 400 feet…

Today, about 10,000 major near earth objects have been discovered by scientists, and approximately 10 percent of them are one kilometer or larger in size.

At some point in the future, it is inevitable that one of them is going to hit us.

And if one does splash down in the Atlantic, the resulting tsunami could potentially kill millions upon millions of Americans.

Nobody talks about this much.  And it is almost too horrifying to think about the death and destruction that such an event would cause.

But it will happen one day.  Let’s just hope that you are out of the way when it does.