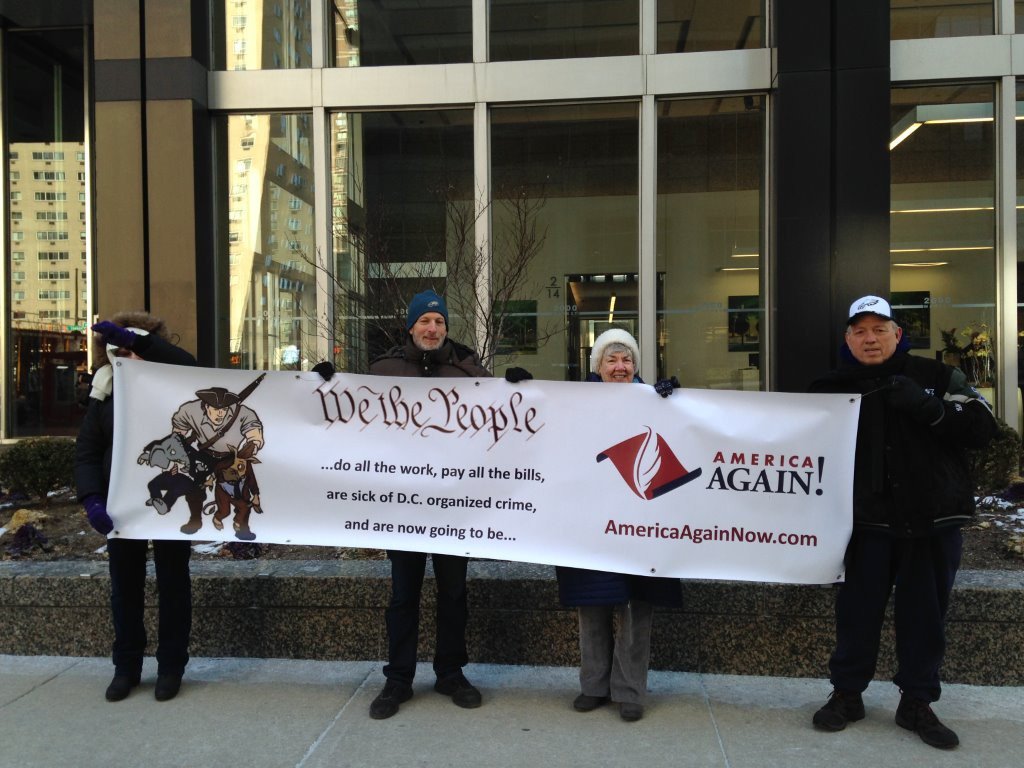 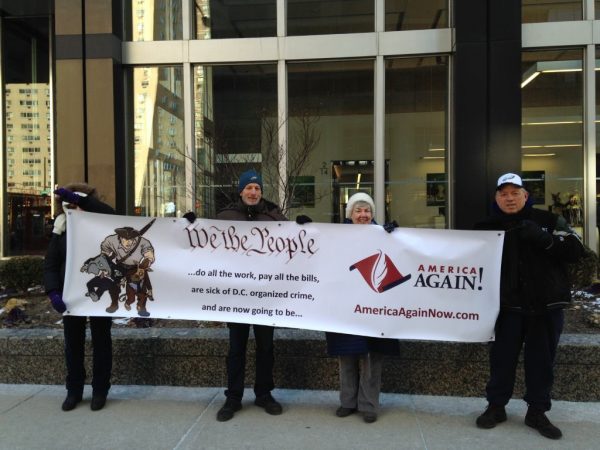 Last month, the American people who are fed up with the corruption in Washington, DC began a campaign to put DC politicians on notice of possible criminal indictment. As part of the process, which is a legal one, American citizens informed their representatives and senators of the AmericaAgain! Good Guys campaign and invited them to join with us and stop being involved in the corruption of Washington and do what they were sent to do: Represent the people. Last month, the people targeted five representatives. This month, six were targeted.

On Saturday, February 28, 2015, six Americans went to the local offices of their senator or representative and informed them of an “Intent to Repossess” their offices, which we pay for with our taxes. That notice reads:

A follow-up packet will also be sent to their offices this week, which will include a letter informing them of Saturday’s activities, calling on them to sign a public statement of agreement of a list of principles, and twenty legislative reforms that AmericaAgain! members want to see put forward. These will be used as bargaining chips against representatives who wish to remain opposed to the people. Among those are a repeal of the 16th and 17th Amendments to the US Constitution.

Pictures were taken to document the event, which you can see below.

Those who were targeted on Saturday were:

For those asking, “Isn’t this just more talk? I mean, all you are doing is holding a banner up and giving a speech, right.”

No, there is more to it, but this is an important first legal step.

AmericaAgain! founder and author of This Bloodless Liberty David Zuniga told Freedom Outpost, “Faced with an AmericaAgain! Indictment Engine™ action, a defendant will attempt the ‘willfulness defense’ to beat the rap. This criminal defense tactic asserts that the defendant did not knowingly or willfully violate the law. Our AmericaAgain! Good Guys campaign will stymie the tactic: first, in AmericaAgain! – The Movie, we assert seven major criminal counts against every member of Congress. Second, each member of Congress receives an information packet asserting these crimes and listing 20 reform laws to end the long pattern of D.C. organized crime. When we hold a Good Guys event in front of their office and mail their packet of documents, they can no longer plead ignorance.”

So, as you can see, this vitally important to the end goals set forth to deal with corruption in Washington.

However, we are not discouraged, but continue to pursue a judicial end. The Good Guys campaign will continue throughout the year until every federal representative has been put on notice. This is where you come in. Won’t you help us if you believe in what we are doing? Click here if you have questions and click here if you wish to join and participate in what is taking place.

As for me, I’ve put my money where my mouth is. I’ve not only joined AmericaAgain!, but my kids and I went and notified South Carolina Senator Lindsey Graham of our intent to repossess his seven offices and possibly bring a criminal indictment against him. After all, these representatives asked to serve, they asked for the votes, they took the oath and they are the ones that vote on our behalf. No one held a gun to their heads and forced them into it. Yet, time and again, they have violated their oath and, as such, commit crimes against the people they are supposed to serve. Here’s the speech I gave in front of Senator Lindsey Graham’s office in Rock Hill, SC on Saturday.

Round 3 will be taking place on March 28. Join in and be a part of the solution today! Here are photos from fellow Americans who took the same stand across the country on Saturday.