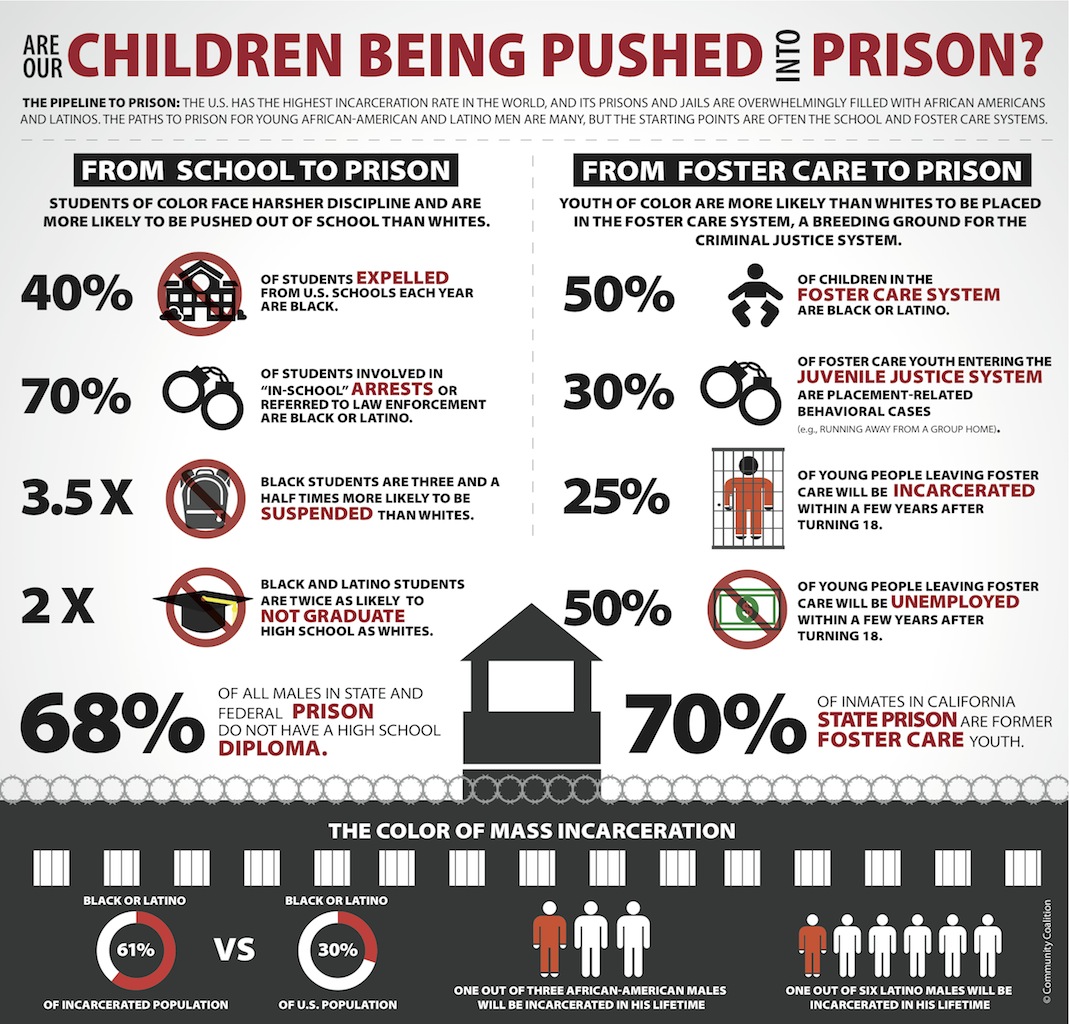 Many societal interests are geared towards profiting from stealing children from their parents and ultimately directing these children into prison where they perform slave labor for many corporations in one of the most hideous practices in human history, the privatized, for profit, prison.

Schools and Their Contribution to Private Prison Profits

“Zero-tolerance” policies criminalize minor infractions of school rules, while cops in school lead to students being criminalized for behavior that should be handled inside the school. Students of color are especially vulnerable to push-out trends and the discriminatory application of discipline in many of our public schools. Children should be educated, not incarcerated, but to the lobbyists for the privatized prison for profit system, they are writing legislation for your state in which the end goal is designed to put your child in prison for profit.

In part one, I pointed out how the privatized prison lobby is responsible for longer mandatory sentences and passing laws which maximize the amount of people in prison and now they are in the schools criminalizing what used to be called juvenile delinquency.

These unholy lobbyists have secured guarantees from most states which they are guaranteed that 100% of all prison beds are occupied. Since the advent of privatized prisons our collective prison population has risen from 300,000 to over 2 million prisoners and the current rates are skyrocketing.

School to Prison Pipeline: Go to School and End Up In Prison The above graphic now applies to our children as our kids are increasingly becoming victim to what is called the School to Prison Pipeline. It used to be a given that unless one committed murder, juveniles under the age of 18 did not go to jail or prison. That is no longer the case. The incarceration of our youth is big business. There are almost 75,000 juveniles in prison and the rates are skyrocketing because of the school to prison pipeline in which schools are increasingly refusing to deal with even minor discipline issues and are placing juveniles in police custody.

As I have previously documented, the Chicago Police Department runs and maintains a FEMA camp facility in which due process is on permanent vacation. So, should it be surprising that Chicago is leading the way in pushing our children from school to prison? In Chicago, in 2010, there were 5,574 school-based arrests of juveniles in the Chicago Public School. These juvenile arrests accounted for about one of every five juvenile arrests in the entire city of Chicago for all of 2010. The incarceration rates for Chicago’s juveniles are above the national average, but they are generally in line with most other metropolitan areas in the country. There is also a general trend of disproportionate rates of minority contact within the juvenile justice system, Black youth accounted for 74% of school-based arrests, and 22.5% of youth arrested were Latino. The enrollment of Chicago schools in was 45% Black and 41% Latino. These high arrest rates for so many of our minority youth, create potential slave laborers for the Prison Industrial Complex. Once a child is adjudicated in the justice system, society usually witnesses a straight line right to prison. These precious children are having their futures robbed from them before they can even get started. What are they being arrested for? The number one reason is for fighting on school grounds.

As a child, I had fights on school grounds, but nobody tried to send me to prison. The number two reason why children end up in the justice system is for possessing small amounts of marijuana.

As a former mental health counselor, I am all too familiar with the devastation brought on by the use of drugs. However, marijuana is not one of these drugs. If legalizing marijuana runs against everything you believe in, how about decriminalizing? In other words, we still make the drug illegal but nobody goes to prison for simple possession.

The federal authorities, controlled by the private corporations of the CCA and GEO, will never allow such a common sense, liberalized approach to drug enforcement. The feds even arrest medical marijuana dispensers and users. Why? Because Wall Street wants prisoners to fill its increasingly privatized and for-profit prison system. This is the major reason why America is home to 25% of the world’s prison population, despite only having 5% of the world’s population. Again, see part one for the corporations who participate and profit in the buisiness of prison slave labor which is increasingly being filled by children.

Our minority youth, in the inner cities, are being conditioned by the system that going to prison is part of the life experience. And with extremely high recidivism rates, prison slave labor will never have any shortage of participants.

The Prison Industrial Complex and their lobbyists are responsible for zero tolerance policies, mandatory sentencing and the three strikes life sentencing that is so prominent in many of our states and unless we identify these abuses and stop them, it is only going to get worse.

Remember that term, School to Prison Pipeline, because they are actively recruiting our children for the prison slave labor force.

In addition to the two primary ways (i.e. fighting and marijuana) that children end up getting trapped in this prison for profit system, there is another significant contributor to this problem, and it is brought to by your state’s version of Child Protective Services.

From Foster Care to Prison

It is often said that a nation should be judged by how it treats its must vulnerable members. From that perspective, America is a despicable nation. Please consider the following graphic which encapsulates the process on how our children are traded as commodities in order for Wall Street CEOs, stockholders and friends are able to maximize their personal profits on the backs of our children. The following graphic is a story unto itself. 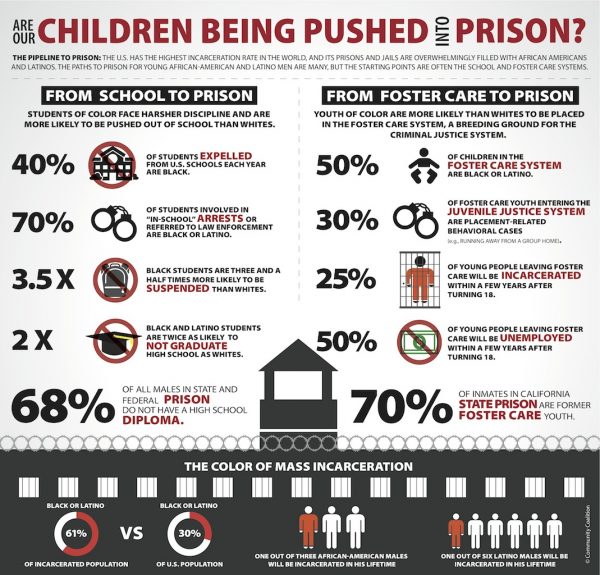 Of all the sources of where inmates come from, the most telling statistic that 70% of inmates were former foster children. On The Common Sense Show, I interviewed Kristi Wills, a former Virginia CPS agent. Wills detailed how the Virginia CPS would literally steal children, without any justification, from their parents, and then these children would struggle mightily with their foster parents. Some foster parents would simply disappear with several foster children and the authorities were unconcerned as to where these children were taken. The late Georgia State Senator, Nancy Schaefer, detailed that this was how many of these children would be sex trafficked from this pool of missing kids. And we see from the above graphic, many foster children end up in prison. Wills and others report that the FBI and/or local authorities are never called to look for foster children who just disappear.

CPS is paid and average of $6,000 per child, per month, by a combination of state and local authorities as well as the Department of Health & Human Services for every child removed from the home. If the child is a minority and/or has a disability, the child is worthy even more money to CPS who uses these stolen children to supplement their department budgets. And now we have clear and convincing evidence that many of these children end up in prison.

CPS profits from abducting children, the privatized prison system is a recipient of this windfall when these children eventually go to prison. When we combine the CPS pipeline to prison with the school to prison to pipeline, it is easy to conclude that our entire society is moving in the direction of preying on its children for profit.

I asked Wills to estimate the percentage of children that actually should have been removed from the home when she was part of an investigative team and she responded, “Less than 10% should have been removed from the home for their protection”. Wills went on to describe about how the CPS agents, following the removal of a child from the home, would go out to a bar and celebrate the victory. In other words, the goal of CPS is not to protect your children, but to seize your children for the profit that the HHS offers. Ultimately, many of these children are sex trafficked and/or end up in prison. Wills was ultimately fired by the Virginia CPS because she refused to lie on documents about the so-called facts which led to the unjust removal of a child from their home.

Doesn’t this system remind one of the Hunger Games in which two children are chosen to fight to the death in Capitol City as part of the tribute that all must pay to the elite?

If by the grace of God your children grow up and are untouched by this corrupt system which has bought its way into every statehouse and federal welfare agency with campaign contributions, we are still left with one dilemma, our conscience.

Please allow me to ask a question to those of us who see this evil and do nothing, WHO ARE WE?