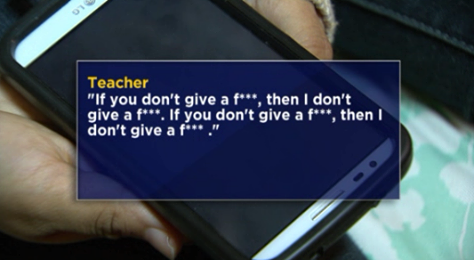 Talk about the The Deliberate Dumbing Down of America.

The kids were laughing, but their parents weren’t.

After you listen to this video, your first question might be, “Was this guy smoking crack?”

A sixth grade teacher at Holmes Middle School in Dallas, Texas has been put on paid administrative leave (what is he, a police officer?) following the leak of video recorded by one of his 12-year-old students in which he not only cussed like a sailor, but he made numerous references to his private parts.

Here are a few highlights:

Is this guy a wannabe rapper or a middle school teacher?

Perhaps the crazier part of the story is how the principal reportedly reacted to the video when the parent of the student who shot it showed up at the school, recording in hand:

KFOR reports that Diana immediately took the recording to the Homes Middle School principal. However, she was incredibly dissatisfied with the response she received. Diana claims the principal simply told her to delete the recording. Diana said that isn’t happening and she will keep the recording as assurance that this teacher never gets the chance to speak to students like that again.

The teacher’s potty-mouth was confirmed by other students from the girl’s class. Another student claims the teacher frequently uses the b-word, a-word and sometimes calls people mother f****.

The school has since placed the teacher on paid administrative leave while they investigate the recording. (source)

Seriously though, what is there to investigate? It’s not exactly Sherlock Holmes level mystery here.

Sounds like the only “mother f****s” in this story are the educational leadership of a school who are apparently just a-ok fine with a teacher telling his 12-year-old students he’s going to d*** their a** over.

(Is getting one’s a** d***ed over covered on the Texas state STAAR assessment?)

P.S. — Wow, it’s sad this story even had to be written because this is a thing that actually happened.