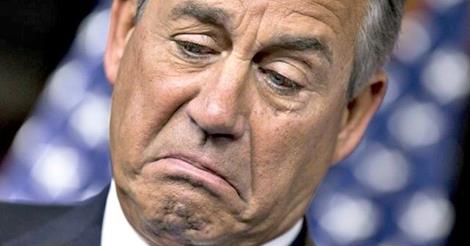 We all know that Speaker of the House John Boehner (R-OH) is a compromised man and that he has been an accomplice to much of the corruption that we see going on today in Washington under Barack Obama. However, something that seems to have eluded the people of Ohio is that John Boehner is in Congress illegally, at least according to the Ohio Constitution.

First, understand that Boehner has been in the federal Congress since 1991, after serving as an Ohio State Representative.

Consider that Boehner has been serving since 1991 and that according to the US Constitution, each representative’s term is two years before needing to be re-elected, Boehner has served over two decades and two dozen terms consecutively in office.

So, is there anything illegal about Boehner occupying the office of a federal representative that long? Yes, there is.

According to the Ohio State Constitution, Article V, Section 8:

So what’s the problem? As usual, the federal courts stepped in and overstepped their bounds. In 1995, the Supreme Court ruled in U.S. Term Limits, Inc. v. Thornton to uphold an Arkansas Supreme Court’s decision that struck down Arkansas’ term limit provisions of federal representatives. The vote was 5-4.

In what had to be one of the most un-American and tyrannical portions of the majority opinion, Justice John Paul Stevens wrote, “The right to choose representatives belongs not to the states, but to the people.” He then added that members of Congress “owe their allegiance to the people, and not to the states.”

Do you see that? The people are not considered the people of the states. This is so backwards it isn’t even funny.

Justice Clarence Thomas understood properly and rebutted the majority position writing, “The Federal Government’s powers are limited and enumerated… the ultimate source of the Constitution’s authority is the consent of the people of each individual state, not the consent of the undifferentiated people of the nation as a whole.”

Nothing in the US Constitution provides for term limits. Therefore, according to the Tenth Amendment, “The powers not delegated to the United States by the Constitution, nor prohibited by it to the States, are reserved to the States respectively, or to the people.”

The question I would have asked Justice Stevens is what “people” are referenced in the Tenth Amendment? Is it not the people of the various states?

Understand that the Supreme Court’s ruling was what was unconstitutional, not the provisions of 23 states that sought to impose term limits on federal senators and representatives.

Both the Ohio Secretary of State’s office and the Ohio Attorney General’s office cited the federal court’s ruling, instead of properly understanding the Tenth Amendment when Freedom Outpost contacted them.

The anti-commandeering doctrine, resting on four Supreme Court Cases dating back to as early as 1842, should be considered in this matter.

Printz v. US is the cornerstone in this doctrine. The ruling states in part:

“We held in New York that Congress cannot compel the States to enact or enforce a federal regulatory program. Today we hold that Congress cannot circumvent that prohibition by conscripting the States’ officers directly. The Federal Government may neither issue directives requiring the States to address particular problems, nor command the States’ officers, or those of their political subdivisions, to administer or enforce a federal regulatory program…such commands are fundamentally incompatible with our constitutional system of dual sovereignty.”

The Tenth Amendment Center has also points out this little nugget:

Finally, the Court ruled that the federal government cannot force the states to act against their will by withholding funds in a coercive manner. In Independent Business v. Sebelius (2012), the Court held that the federal government cannot compel states to expand Medicaid by threatening to withhold funding for Medicaid programs already in place. Justice Robert Kennedy argued that allowing Congress to essentially punish states that refused to go along violates constitutional separation of powers.

The legitimacy of Congress’s exercise of the spending power “thus rests on whether the State voluntarily and knowingly accepts the terms of the ‘contract.’ ” Pennhurst, supra, at 17. Respecting this limitation is critical to ensuring that Spending Clause legislation does not undermine the status of the States as independent sovereigns in our federal system. That system “rests on what might at first seem a counterintuitive insight, that ‘freedom is enhanced by the creation of two governments, not one.’ ” Bond, 564 U. S., at ___ (slip op., at 8) (quoting Alden v. Maine, 527 U. S. 706, 758 (1999) ). For this reason, “the Constitution has never been understood to confer upon Congress the ability to require the States to govern according to Congress’ instructions.” New York, supra, at 162. Otherwise the two-government system established by the Framers would give way to a system that vests power in one central government, and individual liberty would suffer.

So, if you are wondering why you have corrupt politicians like John Boehner in the federal government, you can look to state leaders who will not stand up for States’ rights and the rights of the people for that. Though outwardly they may have penned particular provisions, when it came time to call the federal court’s usurpation of power they caved, but at least in Ohio, it’s still on the books. Therefore, it should be challenged and enforced.

As a last minute note,

a MoveOn.org petition began circulating for the purpose of prosecuting Speaker of the House John A. Boehner for willfully breaking a federal law when he knowingly violated the 216 year-old Logan Act. The petition demands that Boehner, “by law must now be tried by Congress, and forced to resign.” However, according to 18 U.S.C. § 953 (Logan Act), by violating the “Logan Act” (Private correspondence with foreign governments) Boehner can be punished “under federal law with imprisonment of up to three years. Any act of prosecuting and convicting the Speaker must be initiated by a Justice Department United States Attorney; at best Congress can conduct its own investigation for ethics violations and expel Boehner, or he can resign.

Why not go the lawful route and enforce the Ohio constitution? I suppose that would require actually doing something rather than typing in your name on a website.

Every attempt to contact each of John Boehner’s offices for comment were met with voice recordings and being put on hold for over half an hour with no live person answering the phones.