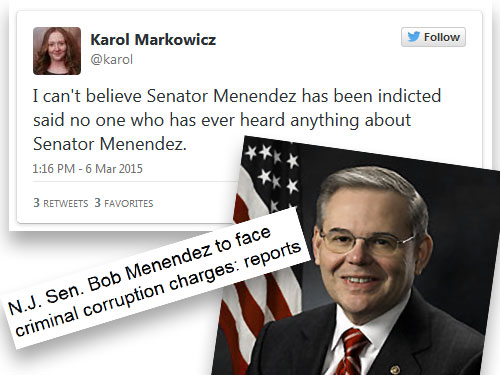 As if the entire upper echelon of the U.S. government — essentially a for-profit corporation front for other mega corporations — isn’t so patently stinking corrupt the filthy, putrid reek of it probably extends into outer space, now this.

News is breaking that New Jersey Dem. Senator Menendez is going to be charged with corruption. CNN is reporting the following:

The government’s case centers on Menendez’s relationship with Salomon Melgen, a Florida ophthalmologist who the senator has called a friend and political supporter. Melgen and his family have been generous donors to the senator and various committees the senator is associated with.

Investigators have focused in part on plane trips Menendez took in 2010 to the Dominican Republic as a guest of Melgen. In 2013, after word of the federal investigation became public, Menendez paid back Melgen $58,000 for the 2010 plane trips calling his failure to properly disclose the flights an “oversight.”

Menendez has denied any wrongdoing in his ties to Melgen.

Then again, this is not exactly breaking news for anyone who knows anything about Senator Menendez, but that isn’t even the point. Who isn’t corrupt in Congress and D.C.? Could any of our elected federal officials really stack up to any other label than corrupt under a microscope? Can anyone find anything there that’s not corrupt by legal definition? Anyone? Anyone? Bueller? Bueller?

(P.S. – In another “one set of rules for them, another for us” bit of news, reports on the case also claim this will test out the DOJ’s ability to even prosecute our Congresspeople and Senators because apparently key evidence gathered by the government might actually be protected by the Constitution’s Speech and Debate clause. Really? So even when they’re corrupt and evidence proves it, they can’t be prosecuted because they’re “too big to fail” er, protected by the Constitution, while the rest of us get the NDAA, black sites, the Patriot Act, and free speech zones???)

Well anyway, what ever-so-coincidental timing on the part of the DOJ… It would seem Menendez has really pissed in Obama’s cornflakes as of late, coming out on the democratic side of the aisle as a harsh critic of Obama’s upcoming Iran deal, just as Aaron Goldstein over at The American Spectator points out:

Last week, Menendez and Tennessee Republican Senator Bob Corker introduced legislation requiring President Obama to submit any nuclear agreement with Iran to Congress for a 60-day review. Back in January, Menendez also directly challenged President Obama at a Democratic Senate retreat when Obama claimed he understood the pressure Senators were under from “donors” (read: Jews). Menendez rose and told Obama he took “personal offense” at his remarks.

This is what I wrote at the time of the confrontation between Obama and Menendez:

Good for Bob Menendez for calling out Obama. But it will come at a price. I’m sure Menendez has now eclipsed Netanyahu as numero uno on Obama’s crap list.

Well, having your Attorney General and closest political ally charge his own party’s top critic on any deal with Iran with corruption is one way to silence your critics.

I’ve said it before and I must say it again. President Obama plays for keeps and anyone who gets in his way faces ruin.