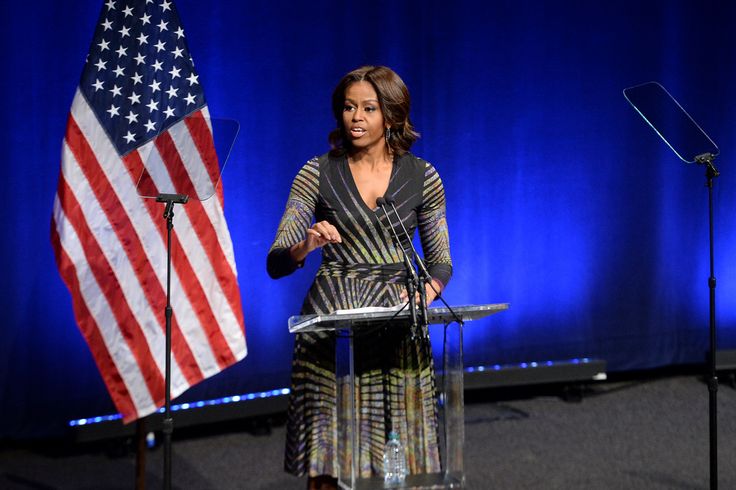 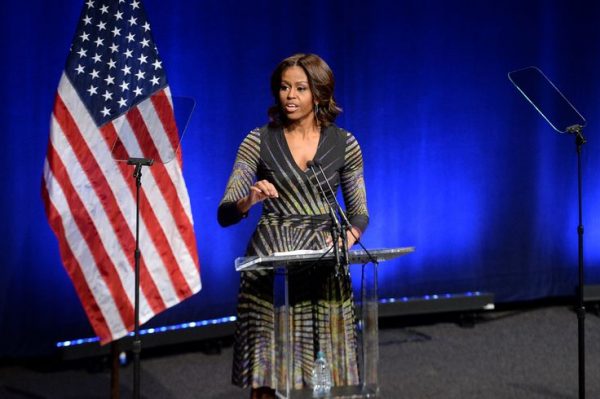 Michelle Obama has come out swinging in support of her husband’s views on seeking treatment for mental health issues. The woman, who has decimated our children’s school lunches, reducing them to unattractive mush in the name of “promoting healthy eating habits,” relayed to Newseum on Wednesday that Barack Obama strongly believed that receiving treatment for mental health disorders was a “sign of strength,” not weakness. Of course, it was just another way to promote Obamacare and its benefits in light of the upcoming Supreme Court challenge.

“It’s time to tell everyone who’s dealing with a mental health issue that they’re not alone, and that getting support and treatment isn’t a sign of weakness, it’s a sign of strength,” said Mrs. Obama. “That’s something that my husband believes strongly as president, because in this country when you’re fighting an illness whether that’s mental or physical you should be able to get the help you need, end of story.”

“That’s why the Affordable Care Act expands mental health and substance abuse benefits and parity protections for roughly 60 million Americans, and it requires new plans to cover things like depression screening for adults and behavioral assessments for kids,” she said.

The low-information voter listening to this first part of Moochie’s little spiel will be taken in to seek help for even the slightest case of “the blahs” only to be diagnosed with depression, sent home with pharmaceuticals and tagged in the system as having a “mental illness.” With Obamacare “requesting” doctors to ask patients about guns, the American Psychiatric Association inventing new mental health disorders every week, and Obama avidly pursuing elements of “gun control” leading to confiscation, it isn’t hard to connect the dots to see that Moochie is pandering for an agenda – Obamacare recipients, their families, and others to seek “help” for mental health and substance abuse in order to gain a backdoor to gun control.

Doctors will now be doing “depression screening” for adults and “behavioral assessments” for children under the guise of improving America’s mental health status. Normal childhood behavior, in many cases, has been diagnosed as some “mental health” disorder or attention deficit resulting in children being overly medicated. It has been almost the same with adults.

Just recently, I went to see my physician for a possible sinus infection. My sciatica and arthritis also happened to be acting up that day causing some additional severe pain. The first thing my doctor said was “You look like you’re depressed.” He immediately assumed a problem without asking based on my facial expression. Luckily, I didn’t have the “blahs” that day.

The sponsor of the event featuring Mrs. Obama as a speaker, Give An Hour, held this summit to launch their new “movement,” “Campaign to Change Direction.” This “movement has developed a network of 7,000 mental health providers, who offer pro-bono services to veterans, service members, their families, and friends urging all Americans to learn signs that someone might be in emotional distress.” It sounds eerily like the “see something, say something” campaign for federal employees to spy on each other and report possible “subversive” activities.

“There should be absolutely no stigma around mental health. None. Zero,” Mrs. Obama said.

She indicated it was time to “flip the script” on mental health in the United States, claiming it was not just a policy or budget issue, but a cultural one.

“Every year, one in five adults or more than 40 million Americans experience a diagnosis of a mental condition like depression or anxiety, and our young people are affected at similar rates ….”

“This shouldn’t be surprising to any of us, because let’s face it, life can be stressful,” she added. “Folks are faced with all kinds of challenges …. Then you add social, psychological and genetic factors on top of all that, and sometimes it’s just too much,” she said.

There is not one individual who has not experienced some form of anxiety or depression. In fact, some types of anxiety or anxiousness is not negative, but positive. No one can say they have not experienced some form of depression or extreme sadness upon the death of a loved one, family member or animal they loved. These are normal situational emotions that resolve over time. Going through the five stages of grief is normal where you experience denial, anger, bargaining, depression, and acceptance. Visiting your doctor when you are in any stage but acceptance could be risky these days.

Under Obama, the number of unemployed individuals has increased with some giving up on even finding a job and having to go on government assistance. How many individuals are unemployed right now in this country who are feeling a sense of “loss” and “helplessness” because they cannot support their families or themselves? Probably quite a few. These are normal emotional responses to life situations, but it doesn’t mean someone needs mental health treatment.

To hear Moochie talk, the slightest little deviation from being “happy” is cause for seeking mental health services.

It has been reported that the American Psychiatric Association has added new “mental health” diagnoses to the DSM – 5, Diagnostic and Statistical Manual of Mental Disorders, to include patriotic behaviors and exercising unalienable rights.

As far as the children are concerned, “behavioral assessments” could mean more unnecessary medicating of our children and nipping their rights to gun ownership in the bud early. If parents don’t agree, they could be hit with some sort of “mental health” diagnosis or charge of neglect.

One can’t help but see the irony of the “First Lady” of the United States pandering for every American adult and child to seek “mental health” or “behavioral” assessments, having family and friends become “monitors” of mental health along with everyone else, and getting “treatment” when her husband has some of the most troubling mental disorders – mythomania (pathological, chronic lying), narcissistic personality disorder, anti-social personality disorder and being a psychopath. If seeking treatment for mental health disorders is “a sign of strength,” Obama should go first for his assessment so he can receive treatment for his many mental health illnesses. Of course, Obama doesn’t have to go for an assessment or evaluation of his mental health. All of his disorders are prominently on display for all the public to see.

The point is everyone experiences what can be termed as “situational depression” or “situational anxiety,” including a physical illness or ailment that causes an emotional response. These are temporary and not deserving of any “mental health” evaluation or treatment. When the situation or physical illness is resolved, these normal emotional responses abate. These are a far cry from what can be termed “clinical depression” or “clinical anxiety” that may require some form of intervention. And, the APA is vastly designating an increasing the number of “normal” behaviors as mental health disorders.

But, to hear Moochie talk, the least little burp warrants an assessment; and, that is exactly what will happen and is happening under the bureaucratic panel guidelines for Obamacare, giving a back door into gun control and possibly confiscation because of a “mental health illness.” If the goal was to de-stigmatize mental illness and its treatment, it actually has had the opposite effect: preventing individuals from seeking help because of the threat of eradicating many unalienable rights.