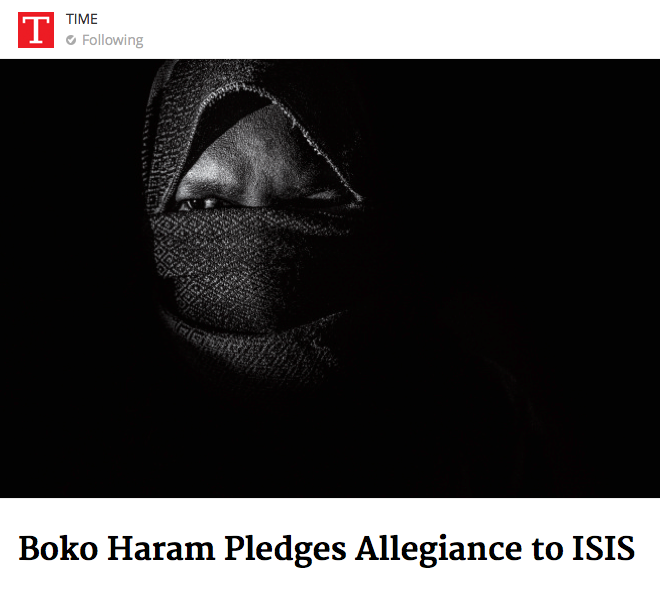 Just one more thing for ‘We the People’ to be concerned about as muslim islamist terrorist group Boko Haram announced their merger with ISIS. Two barbaric and savage groups have now become one in this marriage of convenience between evil and all the more evil. And this was done while Obama’s so-called ‘strategy’ of containment remains the same. Wanting to, as he calls it, ‘degrade’…notice he does NOT say destroy…the fighting power and resources of those whom he still will NOT call ‘muslim islamic terrorists,’ Obama wants us to believe that he can ‘contain’ ISIS with proven-to-date to be mostly ineffective limited and targeted airstrikes in both Iraq and Syria.

And let’s NOT forget that Obama continues to have our people waste time and energy training unprepared and ill-performing Iraqi security forces, while at the same time trying to get the Iraqi government to kiss and make nice to the disaffected Sunnis amongst them.

With a ‘strategy’ like that it’s a wonder that we don’t just raise our hands in surrender.

And so this past Saturday, Nigerian-based Boko Haram’s leader, Abubakar Shekau, posted a well-produced audio message…complete with ‘rolling’ translations from his native Arabic to both French and English…on the internet and on ISIS’ Twitter account announcing some details of their merger. Saying Boko Haram now owes its“allegiance to the Caliph of the Muslims, Ibrahim ibn Awad ibn Ibrahim al-Husseini al-Qurashi” (another name for ISIS leader Abu Bakr al-Baghdadi who is known to his followers as Caliph Ibrahim) “…and will hear and obey in times of difficulty and prosperity, in hardship and ease, and to endure being discriminated against and not to dispute about rule with those in power, except in case of evident infidelity,” Shekau…a ‘takfiri’ who condones acts of violence as being a legitimate way of achieving islam’s religious and political goals…sees this merger as a way for Boko Haram to gain legitimacy of sorts, to increase their funding, to gain recruits, as well as his hoping to now become a player in the plans for when the final caliphate is put into place.

And how did such an alliance come to be…how did 6,000 member Boko Haram elevate itself from being just another local jihadi group to an important and critical ‘tentacle’ of ISIS. The fact is there were two main factions within the Nigerian based Boko Haram…who began their military campaign to impose islamic rule in northern Nigeria in 2009… with the main faction headed by Abubakar Shekau being a violent offshoot of the Salafi movement…and with the other faction…known as Ansaru…being but an offshoot of the main faction. And it was this later offshoot to whom ISIS made contact strongly urging them to ‘unify’ the group’s two factions. Wise move on ISIS’ part as this resulted in a unified command between the two factions allowing Boko Haram…which means ‘Western education is sin’…to expand throughout North Africa while continuing to do the same horrific acts of savagery and barbarism as ISIS does. And now with their being part of ISIS they get to show the world, via the internet, that they too are a group to be feared and a group NOT to be taken lightly.

And this merger with Boko Haram…who gained both notoriety and infamy last April when its members kidnapped more than 200 Nigerian schoolgirls…and who declared northeast Nigeria a caliphate a mere two months after ISIS announced its caliphate in Syria and Iraq…also affords ISIS a propaganda shot in the arm of sorts as they now gain a strong foothold in North Africa via Nigeria, at the same time their soldiers on the ground in both Iraq and Syria are somewhat hitting a roadblock and fighting on the defensive…sort of like taking one step forward then two steps backwards.

But as always, Barack HUSSEIN Obama looks away from the seriousness of this merger NOT only because he thinks his version of containment is the right strategy to force ISIS into becoming the next president’s headache, but also because he is accepting the findings of a recent CIA report that claims that with Boko Haram being rooted in African NOT Arabic islamic practices a divide between the two groups will shortly occur…infighting if you will…even though both group’s strict fundamentalist interpretations of islam are quite similar…even though both ISIS’ and Boko Haram’s are strict and unyielding adherents of sharia law. And all the talk of a divide is because our media is adding fuel to the fire of misinformation that Arabs in general look down on blacks, which is nonsense as numerous ISIS social media accounts exclusively target black Americans, encouraging them to embrace islam, because they claim white America is “racist and oppressive.”

But this merger should NOT have been unexpected as clues were left for those keen enough to pick-up on them. First, Boko Haram… responsible for the murder of thousands…put out an eerily similar to ISIS recruiting video that included a trailer followed by a ‘feature’ film…a film using special effects and high-definition in exactly the same way like ISIS does. Second, fairly recently Boko Haram mimicked the so-vile ‘tactic of terror’ ISIS is known for by releasing in English, French, and Arabic, a six-minute video called ‘Harvest of Spies.’ In this video a farmer is seen confessing to spying for the police, and then a second man is briefly shown before it fades out and cuts to footage of both men with their decapitated heads laying on their chests. (See video here:https://www.youtube.com/watch?v=CScO-gEkWl8) Third, and this is critical…for the first time Boko Haram sent this video out over an official ISIS-affiliated Twitter account.

Yet mum is the word here in D.C. for as all this was unfolding this administration forgets that last November many jihadis from Egypt, Algeria, Libya, and other countries outwardly pledged their allegiance to ISIS. And forgotten as well is that just this past January, Afghani and Pakistani militants also joined ISIS claiming they constituted part of its province. And ISIS has also forged links with other lesser known militant groups across North Africa and the Arabian Peninsula as well…again as Obama looks away.

So as ISIS grows stronger with its adding Boko Haram into the fold, what al-Qaeda does next should be quite interesting for while ISIS is ‘THE’ terrorist group de-jour…especially with its huge war chest fueled by illicit oil profits that bring in about $625,000 to $1.5 million per day…it is still al-Qaeda who possesses the technology, the know-how, the contacts, and the experience to carry off a large-scale 9/11 type of attack. Also, ISIS while in their non-stop jihad mode violates…according to al-Qaeda leader Ayman Zawahiri…islam’s basic teachings of how one is to fight the jihad battle. So by default he is actually calling ISIS’ leader Abu Bakr al-Baghdadi an opportunist and a fraud, because he  does NOT vet those who follow him nor does he care about his fellow muslims…as he kills them as easily or more so than he kills we infidels.

Thankfully for now ISIS and al-Qaeda remain separate groups of hate and savagery, but just imagine if the two did join forces…with ISIS’ money and al-Qaeda’s intel and technology coupled with a merger of both their weapons and man-power…what would have been an easy take down now with a committed American-led coalition of both ‘boots on the ground’ and non-stop firepower from the air…could become a nightmare straight from the bowels of hell…and Boko Haram will become just a small footnote in the war between the civilized man and the savages.