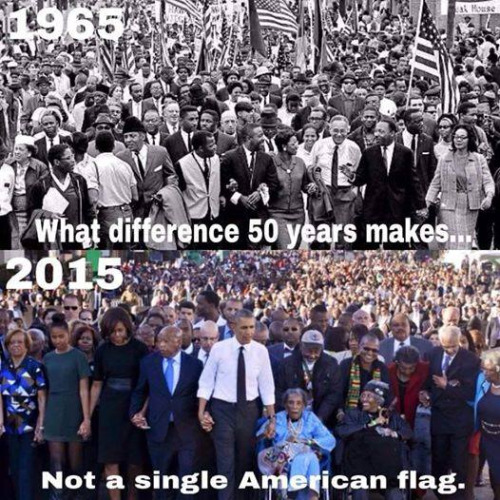 Check out this meme first that someone made of Obama’s recent march at Selma:

Whoever created it does have a point…

Now, we’re already aware that the left-right paradigm is a dead end filled with quicksand to mire us all and keep us pointing fingers at one another instead of the true shadow power structure, and thus, it is best to be avoided because there are no answers on either side of the two-headed beast…

However, what transpired between a conservative and a liberal following the posting of this meme on the former’s blog is pretty hilarious.

first off, fuck you if you’re suggesting that Obama and those marching at Selma are ‘un-american’ because they didn’t carry flags with them.

the first pic was them believing in a better America.
the second is them realizing the dream they had still hasn’t been reached, 50 yrs later. some of the original marchers are seen in that pic.

so gtfoh with your conservative/ tea party tactic of dismissing a major milestone of American history & it’s anniversary with you’re GOP logic of: American pride – flag = un-american.
tfoh with your #sad #smh.

what’s sad is you being petty. what’s ‘smh’ is your Superman Ronald Reagan icon. Reagan can’t save you from your own petty bullshit.

My oh my what an immature and sniveling response!

When you’re done drying the tears from your eyes look up “irony” in the dictionary and then re-read the part about how the dream isn’t realized 50 years later in the picture that features a black president at the center of it.
[emphasis added]

Obviously that whole speech and hand holding of the original marcher in the wheelchair etc. is all a carefully staged political stunt photo op. Obama was handpicked for his role in wrecking the country. He’s not a part of anyone’s struggle unless it’s to ensure the dreams of everyone in the middle class and below die a slow and painful death while his rich shareholder bosses who run the United Corporation of America get richer…

In fact, the only thing missing from that response is how Obama, our puppet-in-chief at the moment, not only didn’t realize the dream, but personally helped ensure the dream wouldn’t be realized 50 years later…