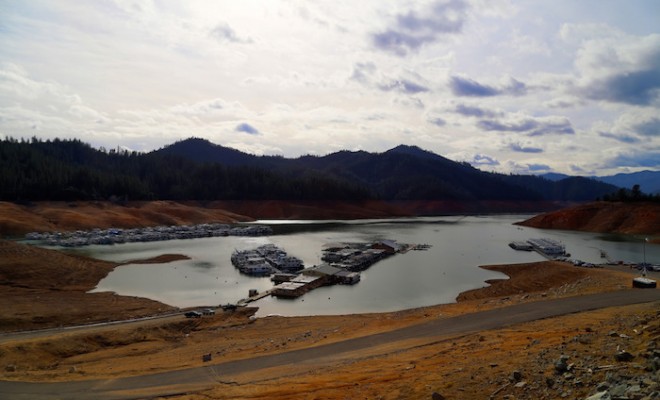 A PORTION OF SOME 38.8 MILLION RESIDENTS IN CALIFORNIA MAY BE FORCED TO RELOCATE, DISPLACE, AS THE WATER SUPPLY REMAINS LOWEST IN 120-YEARS, SINCE RECORD KEEPING BEGAN

Calif. (INTELLIHUB) — With over ten percent of the U.S. population living in California a new problem is emerging as the wet season fell short of delivering adequate rainfall to sustain the populace.

In fact snowpack and groundwater levels are now at historic lows and it has even been admitted that the state only has a 1-year supply of water left for residents to consume before California officially becomes a dust bowl.

Shockingly according to NASA satellite data water levels in just two area river basins were “34 million acre-feet below normal in 2014″ showing the vast extent of the problem, as reported by the LA Times in a recent piece. Moreover the report concluded that the state has been losing “12 million acre-feet of total water yearly since 2011″ which is not good by any means.

Now steps must be taken to ration water but two-thirds of all Californians disapprove of rationing even though most residents agree the crisis is “serious”. However disapproval by residents to ration water supplies will only result in a “task force” making the decision for them as water police are expected to soon emerge in full force.

GET READY FOR SKY-HIGH FOOD PRICES

More importantly agriculture in California is being threatened dwindling our food supply drastically. According to the California Department of Food and Agriculture, “California’s agricultural abundance includes more than 400 commodities. The state produces nearly half of US-grown fruits, nuts and vegetables. Across the nation, U.S. consumers regularly purchase several crops produced solely in California.”

The loss of these commodities are not only detrimental for human food consumption and surplus but may also be detrimental to the U.S. economy in a major way, adding to fears of a coming financial crisis. Not to mention all of this has brought up a new issue as rice farmers have now been offered big bucks for their water.

WATER TO BE WORTH MORE THAN GOLD

With the drought stretching into its fourth year, a heavyweight water agency from Los Angeles has come calling on Sacramento Valley rice farmers, offering up to $71 million for some of their water.

The price being offered is so high, some farmers can make more from selling water than from growing their rice. Many are willing to deal: Nine irrigation districts, mainly serving rice growers along the Feather River basin, have made tentative deals to ship a portion of their water to the Metropolitan Water District of Southern California and several other water agencies later this summer. — reports the Sacramento Bee.

Where do we go from here?