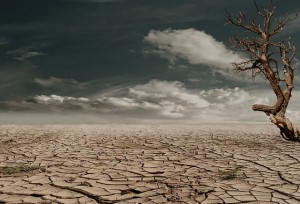 Once upon a time, much of the state of California was a barren desert.  And now, thanks to the worst drought in modern American history, much of the state is turning back into one.  Scientists tell us that the 20th century was the wettest century that the state of California had seen in 1000 years.  But now weather patterns are reverting back to historical norms, and California is rapidly running out of water.  It is being reported that the state only has approximately a one year supply of water left in the reservoirs, and when the water is all gone there are no contingency plans.  Back in early 2014, California Governor Jerry Brown declared a drought emergency for the entire state, but since that time water usage has only dropped by 9 percent.  That is not nearly enough.  The state of California has been losing more than 12 million acre-feet of total water a year since 2011, and we are quickly heading toward an extremely painful water crisis unlike anything that any of us have ever seen before.

But don’t take my word for it.  According to the Los Angeles Times, Jay Famiglietti “is the senior water scientist at the NASA Jet Propulsion Laboratory/Caltech and a professor of Earth system science at UC Irvine”.  What he has to say about the horrific drought in California is extremely sobering…

As our “wet” season draws to a close, it is clear that the paltry rain and snowfall have done almost nothing to alleviate epic drought conditions. January was the driest in California since record-keeping began in 1895. Groundwater and snowpack levels are at all-time lows. We’re not just up a creek without a paddle in California, we’re losing the creek too.

Data from NASA satellites show that the total amount of water stored in the Sacramento and San Joaquin river basins — that is, all of the snow, river and reservoir water, water in soils and groundwater combined — was 34 million acre-feet below normal in 2014. That loss is nearly 1.5 times the capacity of Lake Mead, America’s largest reservoir.

Statewide, we’ve been dropping more than 12 million acre-feet of total water yearly since 2011. Roughly two-thirds of these losses are attributable to groundwater pumping for agricultural irrigation in the Central Valley. Farmers have little choice but to pump more groundwater during droughts, especially when their surface water allocations have been slashed 80% to 100%. But these pumping rates are excessive and unsustainable. Wells are running dry. In some areas of the Central Valley, the land is sinking by one foot or more per year.

Are you starting to understand why so many experts are so alarmed?

For much more from Famiglietti, check out this 60 Minutes interview.

According to the U.S. Drought Monitor, essentially the entire state is suffering drought conditions right now.  And as you can see from the map below, most of the state is currently experiencing either the highest or the second-highest classification of drought… 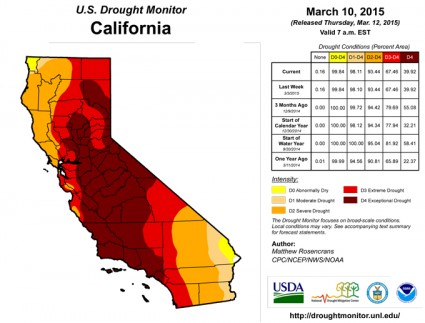 Nearly 40 million people live in the state of California at the moment.

What are they all going to do when the water is gone?

In some rural areas, reservoirs are already nearly bone dry.  And in other areas, the water quality has gone way down.  For example, in one Southern California neighborhood black water is now coming out of the taps…

Those who live in Gardena, California, are understandably skeptical when asked to consume water that strongly resembles crude oil or something emitted by a squid. The water reportedly also has an “odor of rotten eggs or sewer smell,” according to one resident.

Perhaps you don’t care about what happens to California.

Perhaps you believe that they are just getting what they deserve.

But the truth is that this is a crisis for all of us, because an enormous amount of our fresh produce is grown in the state.

As I discussed in a previous article, the rest of the nation is very heavily dependent on the fruits and vegetables grown in California.  The following numbers represent California’s contribution to our overall production…

–99 percent of the artichokes

–half of bell peppers

–90 percent of the leaf lettuce

–a third of the fresh tomatoes

Without the agricultural production of the state of California, we are in a massive amount of trouble.

And of course there are other areas all over the globe that are going through similar things.  For instance, taps in Rio de Janeiro and Sao Paolo are running dry as Brazil experiences the worst drought that it has seen in 80 years.

The world simply does not have enough fresh water left at this point, and that is why water is being called “the new oil”.  The following comes from CBS News…

It’s been said that the wars of the 21st century may well be fought over water. The Earth’s population has more than doubled over the last 50 years and the demand for fresh water — to drink and to grow food — has surged along with it. But sources of water like rainfall, rivers, streams, reservoirs, certainly haven’t doubled. So where is all that extra water coming from? More and more, it’s being pumped out of the ground.

Water experts say groundwater is like a savings account — something you draw on in times of need. But savings accounts need to be replenished, and there is new evidence that so much water is being taken out, much of the world is in danger of a groundwater overdraft.

And if scientists are right, what we are experiencing right now may just be the very beginning of our problems.  In fact, one team of researchers has concluded that the Southwestern United States is headed for a “megadrought” that could last for decades…

Scientists had already found that the Southwestern United States were at great risk of experiencing a significant megadrought (in this case meaning drought conditions that last for over 35 years) before the end of the 21st century. But a new study published in Science Advances added some grim context to those predictions.

Columbia University climate scientists Jason Smerdon and Benjamin Cook, and Cornell University’s Toby Ault were co-authors on the study. They took data from tree rings and other environmental records of climate from the Southwest and compared them to the projections of 17 different climate models that look at precipitation and soil moisture. When they made the comparison between past and future, they found that all the models agreed: the next big megadrought is coming, and it will be way worse than anything we’ve seen in over 1,000 years–including droughts that have been credited with wiping out civilizations.

Needless to say, along with any water crisis comes a food crisis.

Virtually everything that we eat requires a tremendous amount of water to grow.  And at this point, the world is already eating more food than it produces most years.

So what is going to happen to us as this water crisis gets even worse?