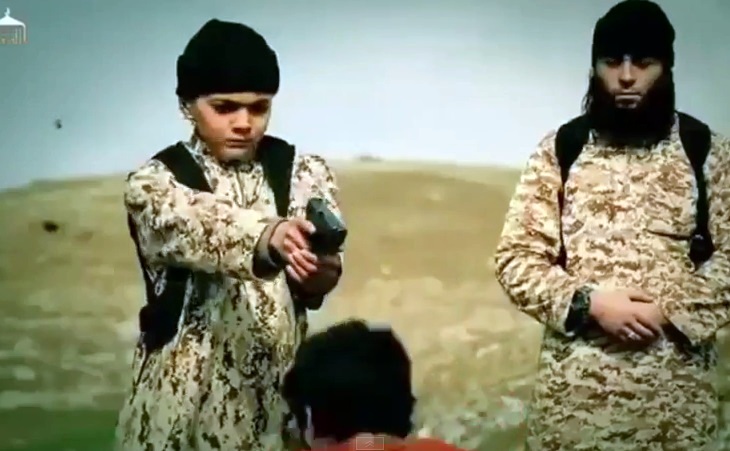 His French schoolmates are in shock. Not for long. They had better get used to it. They ain’t seen nothing yet. Schoolchildren in southern France are in shock after seeing a former classmate executing a hostage in a video released by the Islamic State (Isis).

The Islamist group posted online gruesome propaganda video showing a boy in military fatigues shooting an Israeli-Arab teenager in the head. The boy had been accused of working for Israel’s spy agency Mossad.

In the video the child, aged 11 or 12, is flanked by a bearded man, who is believed to be his stepfather.

“Concerning the formal identification of this person, I cannot tell you anything,” schools inspector Jacques Caillaut told AFP. “Children from the Vauquelin College have recognised one of their (former) classmates, but we must remain cautious.”

The child, said to be called “Ryan” was in his final year of primary school education at École Élémentaire Publique Vergers in Toulouse, until 11 March 2014, when he was reported absent by the school.

“He was a child like all others, he was integrated, played in the local football club and attended birthday parties,” his former teachers told Libération newspaper.

Caillaut said psychological assistance was being provided to the boy’s former classmates who have seen the video. They are now in first year of the French equivalent of high school.

“Students are asking their parents questions such as ‘Why he didn’t turn the gun against the others? Could have he run away afterwards?’,” he said.

French media has identified the man standing besides the boy as Sabri Essid, 31. Essid is believed to be the boy’s stepfather. According to Le Parisien Essid left France for Syria with all his family in spring last year.

Essid is the stepbrother of Mohammed Merah, who killed seven people after targeting a Jewish school in Toulouse in 2012.

Murdered “people”. He was a devout Muslim who opened fire on a Jewish day school and slaughtered children. Children, Jewish children. People, my eye.