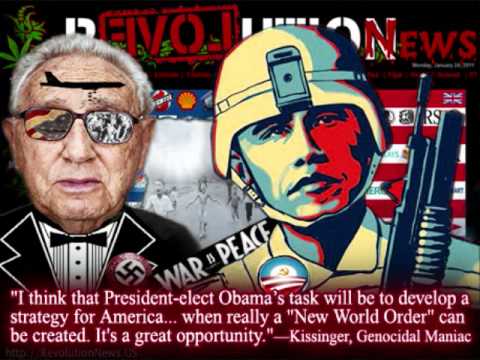 A few days ago, loyal FOTM reader and commenter Jan Neeley wrote a comment that is, at once, intriguing and alarming:

In 2011 I was on youtube going thru videos of 9/11 and other questionable events. To make this short, I found a video which was about 1-2 hours long and Henry Kissinger was talking to a man name unknown – Kissinger said to this man “we are grooming a young man to be president one day his name is Barack Obama”. This was said during the 1980 convention…. My mouth fell wide open. This would have made Obie about 19-20 years old. Kissinger was wearing a mustard yellow v neck sweater with shirt and tie. Common dress for the 1980’s. I saved the video to my youtube and I saved it as well to my videos on my computer. It is gone. No where to be found. Everything is planned. It is all evil….

I scoured the Internet for the Kissinger video referred to by Jan Neeley, but to no avail. The only real link that popped up was to Neeley’s comment on FOTM.

But it must be said that Neeley’s comment is consistent with what U.S. physicist Tom Fife said.

Tom Fife is an American businessman and physicist. During the 2008 presidential campaign, Fife, then a U.S. government contractor, wrote an essay claiming that in 1992 while he was visiting Moscow, a woman with undying allegiance to Soviet Communism (the Soviet Union had recently collapsed, on December 31, 1991) told him that a black man named Barack, born of a white American woman and an African male, was being groomed by communists to be, and would be elected, President of the United States.

The Russian woman also said that Barack is himself “a Soviet,” that is, a communist. She also said Barack was from Hawaii, educated in “Ivy League” schools, had been to New York, and was presently in Chicago.

Three years after Fife’s encounter with the woman in Moscow, in 1995, Barack Obama was chosen by Alice Palmer to succeed her in the Illinois State Senate. Palmer was an admirer of the Soviet Union and had attended the 27th Communist Party Congress in the Soviet Union. Palmer announced that Obama was her chosen successor in the Chicago home of Bill Ayers, a self-described communist and former terrorist of the Marxist Weather Underground.

Neeley’s comment is also consistent with what Nation of Islam leader Louis Farrakhan said on March 20, 2010 at a black conference in Chicago.

Referring to “our brother” Barack Hussein Obama, Farrakhan questioned how a “junior senator” who hadn’t gotten his “foot on the ground” could have the audacity to think he could be President. Farrakhan then declared that Obama “was selected before he was elected” by certain “kingmakers” who were “political scheming” “in back rooms,” and that Obama’s early primary victory in Iowa was “financed largely by Goldman Sachs.”

Although I couldn’t find the 1980 video of Kissinger referenced by Jan Neeley, I did find this, a video uploaded to YouTube on Jan. 6, 2009 — 14 days before Barack Obama was inaugurated President.

The video is of a CNBC interview with Kissinger on the floor of Wall Street, mainly about the Gaza conflict.

Beginning at the 2:01 mark, the female reporter asked Kissinger if Gaza or another place would be the country or conflict or place that would define the [incoming] Obama administration. Kissinger replied with a very telling comment:

“The [Obama] administration is coming in at the moment when there is a lot of upheaval in many parts of the world simultaneously — near Pakistan, you have the Intifida movement. So we can’t really say that there is one conflict that is the most important one. But he [Obama] can give due impetus to American foreign policy partly because the reception of him is so extraordinary around the world. I think his task will be to develop an overall strategy for America in this period when really a New World Order can be created. It’s a great opportunity. It is in fact a crisis.”

The male reporter then asks: “Are you confident about the people whom president-elect Obama has chosen to surround him because he does not have a great deal of experience.”

Kissinger replies: “He has appointed an extraordinarily able group in both the international and financial field.”

Of course, Kissinger proves to be very mistaken in that last observation, as Obama has made a shamble of U.S. foreign policy and of the economy.

Henry Kissinger was National Security Advisor (1969-1975), then concurrently Secretary of State (1973-1977) in the Nixon and Ford administrations, after which he ran his lucrative international consulting firm, Kissinger Associates. Kissinger is a known member of all the secretive elitist groups, including the Bilderberg Group, the Council on Foreign Relations, the Aspen Institute, and the occultic owl-god worshiping Bohemian Club. In 2008, Kissinger donated $20,000 to the Bilderberg to fund the group’s annual meeting. (See “Powerful Bilderberg Group’s Tax Returns”)

Then Secretary-of-State Henry Kissinger is quoted in the bestseller exposé of the U.S. betrayal of American POWs in Vietnam, Kiss the Boys Goodbye, as saying,“Military men are just dumb stupid animals to be used as pawns in foreign policy.”