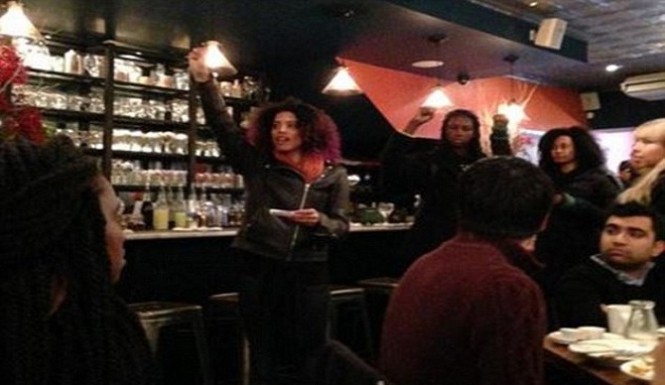 The demonstration took place just days after the shooting of two police officers in Ferguson, Missouri, an attack carried out by a ‘Black Lives Matter’ supporter.

The protesters marched into the restaurant before reading out a list of names of black people killed by police, including Mike Brown, subsequently chanting, “Which side are you on friends, which side are you on? Justice for Mike Brown is justice for us all, and we will fight for freedom until this war is won.”

The diners looked nervous throughout the spectacle before one of the demonstrators said, “Please raise your hands and stand with us if you stand for black lives.” The onlookers responded by half-heartedly raising their hands, while others stood. The clip shows young children, who couldn’t possibly understand the nature of the issue, also raising their hands.

By making Michael Brown the focus of the protest, the demonstrators only succeeded in illustrating their own colossal ignorance of the events that led up to the shooting death of the 18-year-old.

Earlier this month, the Justice Department found that the claim Michael Brown had his hands up before he was shot by Officer Darren Wilson was “inconsistent with the physical and forensic evidence” and that “witnesses have acknowledged their initial accounts were untrue” (ie they lied), completely discrediting the entire foundation of the ‘Black Lives Matter’ movement.

Brown had just robbed a convenience store before trying to grab Officer Darren Wilson’s gun, punching him in the face and then charging him. To claim he was an innocent victim of racially-driven police brutality is clearly erroneous.

The notion of occupying a building while people are trying to spend time with their families and intimidating them via an elaborate guilt trip into supporting the cause also smacks of bullying tactics and authoritarianism.

Meanwhile, at another #BlackBrunch protest, demonstrators staged beatings of black people while white diners looked on. Some of the protesters also sat at the tables of diners while they were trying to eat brunch.

There have been numerous similar #BlackBrunch protests across the country in recent months, with many of them targeting white people, presumably because of the racist belief that whites should automatically feel guilty over police shootings simply due to the color of their skin.   Black Brunch demonstrators in New York previously accused white people of being complicit in “genocide”.   From chanting for the deaths of police officers, to harassing parents and children in shopping malls, to blocking freeways, the Black Lives Matter demonstrators have only succeeded in bolstering support for police across the nation, discrediting opposition to the genuine problem of police brutality and the militarization of law enforcement.   Other #BlackBrunch events also took place at various locations around the country yesterday.